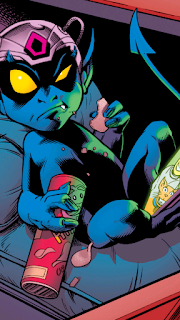 I'm reading comic books and spitting out spoilers at the moment. The one I have in my hands right now is not a new book. It's something I have had floating about, unread, since 2015. And, I'm just realizing that there is more than one flavor of X-Men comic book.

The list of different X-Men comics include the following, but there are a lot more besides:


I've been pretty much ignoring the adjectives in comic books up to now - the "Amazing" part of Amazing Spider-Man, but it turns out these words tacked onto the front of titles are vitally important. All New X-Men is actually a different comic book entirely to Extraordinary X-Men, for example, as this article from Comics Aliance explains.

I guess that means this is the YA version  of an X Men book. It's not what I would have chosen if I'd realized the meaning of the All New tag before I got it, but now I have it so I guess I'd better read it. Sometimes the books you choose without realizing exactly what they are about turn out to be the best. Sometimes...

The book starts with an internal monologue where one of the characters sketches out why YA versions of the X Men are around. Apparently so the original five could save the X Men from themselves, pretty vague, but I'll go with it. There's a fight with some masked thugs and one of them drops a wallet. It's believable I guess, but a smidge more detective work would have been nice.

The art is also tidier and more polished than I like, usually, but it fits the style of this book and is a skillful and accomplished example of this style of shiny art. The super scientist of the group has a caravan that's bigger on the inside than on the out. It's a cool mobile hideout, but I would prefer a base and have them wear uniforms, like proper X Men.

Nightcrawler turns up among the team, but he's a baby wired up to some gizmo and hiding in the machinery like a gremlin. Very strange.

But then, right at the end, they put on proper uniforms, let Nightcrawler out of his cage and get ready to rumble. Yeah, they really are X Men, and I'm OK with coming back to see how this time-traveling mess of YA X Men turns out.
Labels: Comic Books Marvel X-Men