Doctor Who - It Takes You Away 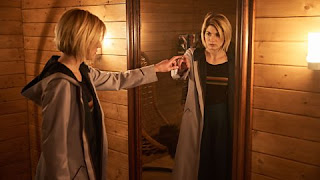 It’s funny, but the latest episode of series thirty-seven of Doctor Who, which is called It Takes You Away actually felt more like Sapphire and Steel to me, rather than Doctor Who, but I have no problem with that.

Before I go on to explain my thinking here, let me warn you that I will be making no effort to avoid spoilers, so if you want to remain unspoiled, look away, and click away now.

Phew, so with the spoiler warning out of the way, lets get back to talking about Doctor Who. It was like Sapphire and Steel because it was based round the idea of the breakdown of the integrity of our universe, played for sci-fi thrills and horror chills. Sapphire and Steel is a creepy and crazy show, and I loved it, and this episode of Doctor Who shares a lot of its DNA. But this vibe is not a completely new departure for Doctor Who.

Even though, theoretically, Doctor Who should be about aliens and robots and spaceships, the show sometimes throws in an episode that is a mix of sci-fi and horror, such as an old episode called Horror of Fang Rock. That’s another thing this season of Who has been doing, harking back to the golden age of Tom Baker, and mining it for, lets say... inspiration. Horror of Fang Rock was the first serial of the 15th season of the original run of Doctor Who, September 1977. It featured the Doctor, played by Tom himself, pitted against a shape-shifting alien monster. The setting was a cold and creepy rock in the middle of the sea, with just a lighthouse on it. Take a look at lots of images from Horror of Fang Rock at the wonderful tygerwhocame2t website.

This episode saw the Doctor, played by Jodie Whittaker, who I am already loving in the role, pitted against shape-shifting alien monsters. The setting is a remote fjord, with only a single forest cabin anywhere around. When I describe it like that, you can see there are lots of parallels, and I enjoyed that about it very much.

The new episode is recapped by The Guardian thusly:

The Doctor finds a cottage in Norway in the winter with a chimney but no smoke, and all the windows boarded up. Inside, team Tardis come across a petrified young blind girl, Hanne, who needs help to find her father, who has been missing for four days. Before long, they are inspecting a mirror that is a portal, of course, but one that appears not to lead anywhere at all. Beyond it lies a mirrored universe: the same house, moved about a bit and occupied by some familiar faces.

Speaking of parallels, Whittaker is really starting to inhabit the role of the Doctor now, and her outfit works extremely well. I had reservations at first, but watching her pace back and forward, her big, swishy cloak billowing round her, I was finally 100% sold. She commanded the room and looked the part, just as the Doctor should. Her characterization, as super-intelligent, but awestruck and confused, really hits my sweet spot, too. It is the kind of bonkers performance the mighty Tom himself was fond of turning in. It gets exaggerated at points, such as when she whizzes around tasting soil to ascertain the time and location the Tardis landed, or talks about future sheep revolution, but it all works.

It was a good episoe, but there were some negatives, for me, mostly to do with the Doctor's current swarm of companions. The companion characters were too busy, once again, and I would very much like to see the herd thinned out. In The Horror of Fang Rock, there was only one companion, Leela, and she is a huge presence, hunting the alien, demolishing walls, threatening to cut out people’s hearts if the don’t do what the Doctor says, giving the Doctor a pep talk and generally raising hell.


Jodi’s gang of companions, however just repeated the same character beats they have been given in every episode so far. Yaz mentions her police training, check, Ryan has daddy issues, check, and Granddad is given all the best lines, check. He shouldn’t have sandwiches in his pocket, the Doctor should, just by way of an example. This is the sort of adorkable antics that works well for the Doctor, not for an annoying old bus driver.They have to thin out this mob of companions, and I would like granddad to be the first to go. 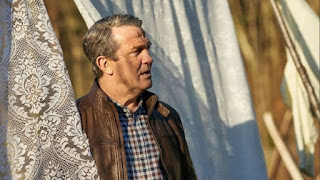 I prefer episodes with all the robots, spaceships, and monsters, but a respectful slice of Who, like this, that hearkens back to the past but is forward-looking too, will do nicely until next week’s more overtly sci-fi-looking episode comes along.

In Horror of Fang Rock the Doctor quotes Wilfrid Gibson's poem Flannan Isle as they leave Fang Rock, which echoes eerily on the empty island as the TARDIS fades away, and that seems an appropriate way to end this post:

Aye: though we hunted high and low,
And hunted everywhere, Of the three men's fate we found no trace
Of any kind in any place, But a door ajar, and an untouch'd meal,
And an overtoppled chair...
Labels: Doctor Who TV