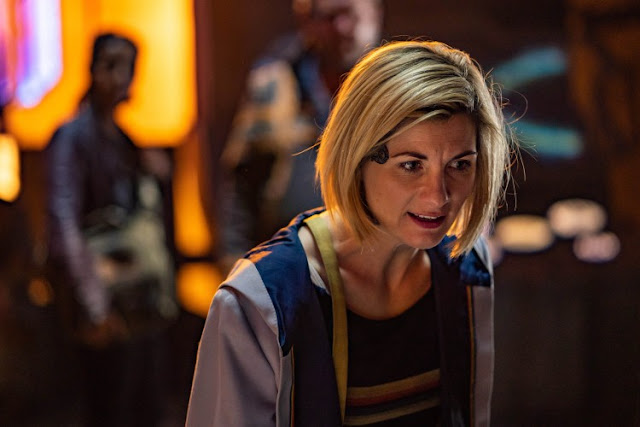 The Doctor Who episode I’m talking about in this post is the last one of Series 11, and it is titled The Battle of Ranskoor Av Kolos. This latest episode of Doctor Who scored very highly on atmosphere, but not so much on story. I very much liked the look of the episode, and I liked that the Doctor was in charge, her personality now fixed and fully formed, but I just wish this could have been hung on a plot that made some kind of sense. It is all very watchable, as long as you don’t think too hard about any of it.

I’d talk in a little more detail, but that will entail spoilers – be warned.

The visuals of the planet were great, while harking back to the old trope of being shot in a quarry. I also very much liked the look of the Ux, and the way they were attached to Kirbyesque abstract technology in order to do their magic. The special effects were all very convincing, to me at least, throughout. Tim Shaw is back, which I wasn’t so pleased about, but his creature design looks better than ever, even helmet off. The sets were atmospheric and believable as spaceships, and high-tech architecture. The episode was directed by Jamie Childs, and everything looked great but these visuals were let down by the script, by Chris Chibnall, the new showrunner. 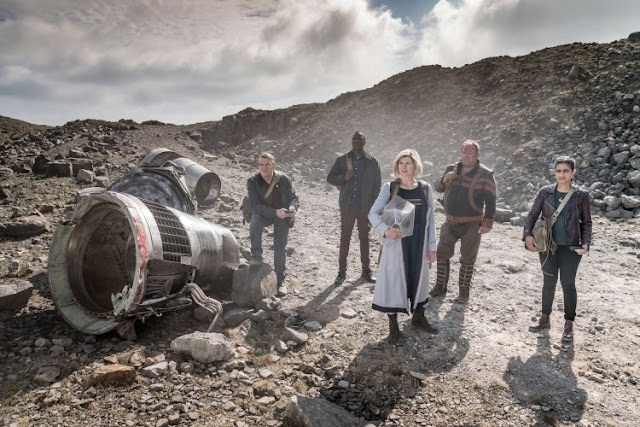 Like I said, the Ux were great, but I didn’t like the way they believed that the first psycho alien to wander along was their god, and that is just one of the symptoms of the confused writing in this episode. I also don’t like how the Doctor, Graham, Yaz and Ryan now answer distress calls, because it used to be, in the old days, that the Doctor would turn up to places pretty much at random. I don’t see the Doctor voluntarily taking on the role of rescue service across time and space.

I like action tropes as much as the next guy, but there are some that should be retired, such as when Ryan and Graham duck and two groups of robots - sniper bots - shoot each other. Speaking of tropes, the end of the episode where technology saves the day in some ill-defined way was disappointing. Worse than that, with signals blocked by nicotine patches, headaches from planetary vibes, and the TARDIS and the Ux combining their abilities to return the squashed planets, it was hard to follow. In reality all that happened was technology is used and everything is okay again. There was no reason for that to be made so complex and dull. I managed to work out what was going on, but it was not anything remotely close to an exciting climax.

The writing was just not where it needs to be, but there was stuff I did like about it. I liked the small moments, such as when Ryan and Graham point out the Doctor’s hypocrisy about the use of weapons. And I like her confused attempts to justify herself, followed by her saying, “Don’t quote that back to me.” There were a lot of nice moments of humor, and I often smiled, and even laughed out loud from time to time. I have been complaining about the writing, but I do sympathise. I do know that writing is really hard to get right. I have struggled with putting together exciting and engaing sci-fi that makes sense, myself.


Okay, I can’t end this post without one final rant. I know Graham is very popular with the fans, but I can’t stand the character. He takes the focus away from the Doctor in a way that Yaz and Ryan don’t, and he absolutely has to be gotten rid of.


I just so hate Graham, and he was on top form this episode. His story arc, if you can call it that, shoved him into a standoff against an alien super-warrior, in the shape of Tim Shaw, and Graham had his back turned. Was that supposed to show he was supremely confident in his fighting skills? What fighting skills? Why was this old dude confronting the big bad, instead of the Doctor?

It should have been over there and then. Tim Shaw should have shot the idiot down, but no. There was a face-off. I have been rooting for this character to get written out at the earliest opportunity, and this would have been the perfect moment. Tim Shaw should have eviscerated the old coot, and that would have made for great feels, for those interested in such things. But no, he easily defeats the alien super-warrior, with the help of a distraction from Ryan. Graham is not the Doctor, and he should go. Now.

Everything was rounded out with a trailer for the New Year’s special, which looks like it will skip through history, back on Earth. That’s fine by me, and I can’t wait to see who they have chosen as the bad guys. I don’t think it’s the Daleks, but I do think they will have plumped for something iconic.
Labels: Doctor Who sci-fi TV