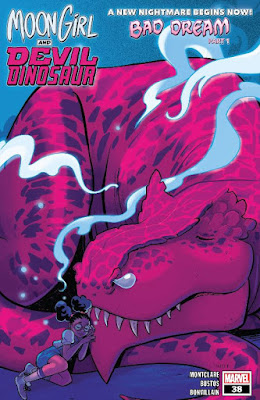 I am such a sucker for Moon Girl and Devil Dinosaur. I love the art, and I love the concept. Devil Dinosaur was created by Jack Kirby, and the character first appeared in April 1978. Marvel instructed Kirby to create a series incorporating a dinosaur, since dinosaurs were hugely popular with young audiences of the time.

Devil Dinosaur's latest ongoing series began in 2016. The series is a team, with Devil Dinosaur partnering with Lunella Lafayette, a.k.a. Moon Girl, a 9-year-old prodigy.

I always enjoy reading this comic, but it has to be admitted that different issues vary wildly in quality, like with any Marvel title. Whether a particular episode is good depends on a bunch of factors, particularly whether the story is being derailed by a crossover event or something of the like. So the question arises: is issue 38 one of the good ones? Let's take a look and find out.

The cover, for starters, is great. It is a nighttime scene with a subdued and limited color pallet, making it a very classy image indeed. I can almost imagine curling up by the maw of a t-rex and being able to sleep soundly, at least when I'm looking at this image. It's stylized and simplified, almost cartoonist, but in a good way.

The first frame of the story is a full page in size and builds on this image of sleep with a more realistic picture of Moon Girl slumbering in bed, this time with no dinosaur, and I love the detail of this image. The artist and writer have put a lot of time and effort into fleshing out her room and her life. You can spend a long time just gazing at it, your eye moving from one detail to another.


Then we go into the story itself, where we see what is happening in Moon Girl's dream. It's about a beautiful future on a moon base, where she lives with Earth's mightiest heroes. I recognized pretty much all of them except from one hero in the foreground, who looks like an older, wiser, black, female version of Thor. I have no idea who it is, which makes me feel deeply ashamed of the gaps in my comic lore.* 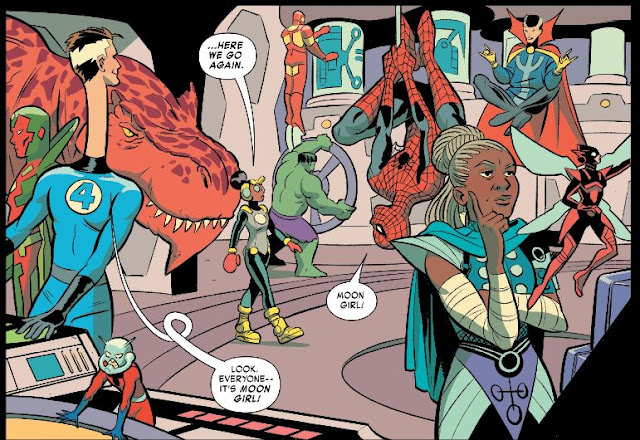 *I worked it out. She's Shuri, but she's old because this is the future. I'm annoyed at myself that it took a while for me to get that.

Unfortunately, with no supervillains to fight in this perfect future, the heroes bicker among themselves. That is an interesting idea, but it gets forgotten and the story goes somewhere else entirely after Moon Girl awakes.

The following morning, we get a beautiful quote from the sleepy Moon Girl:

Somewhere out there it's still bedtime.

I often have to get up early in my day job, and I very much sympathize with the sentiment that somewhere out there it's still bedtime. There are a lot of things to like about this issue, but I do have a complaint. The plot moves quite slowly, and the issue feels a little decompressed. Decompression is a style of storytelling that is influenced by film storyboarding and is a more cinematic style.

There is nothing particularly wrong with that, but it does stretch out the page length of plots, thinning out the amount of stuff happening per page. This could be because the story is being written for the trade paperback, which will probably collect six issues into one volume and so doesn't impose the same urgency to get to the end of the story.

Anyway, there is a lot to like here, and it is an obvious buy for fans of the dinosaur, like me, but it is not a classic and can be skipped by those who are not fanatical dinosaur comic book fans.