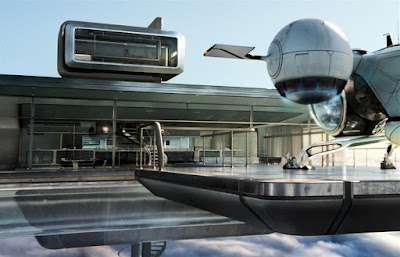 Oblivion is a post-apocalyptic science fiction film, directed by Joseph Kosinski, that he says pays homage to science fiction films of the 1970s. It was a modest commercial success, grossing $286 million worldwide against a $160 million budget, but I like it a lot. I happened to catch it on the TV last night, watched it again, and I think it holds up.

While the plot of Oblivion is stupid, it has a lot of other stuff going for it that make it an extremely classy sci-fi movie. In fact, if you treat the story as something like a dream, or the sci-fi version of magical realism, it is very rewarding to watch. Kosinski has managed to do what he intended, and capture the vibe of a 70s sci-fi movie.

The production design alone is just inspired. The landscapes are a wonderful, bleached, monochrome, like bone and ashes drying in a harsh sun, and the architecture and technology is even more austere.

I just love the look of this movie... all except the jet copter, A lot of other people like it, but it's a little flimsy for my taste, though that's on purpose, of course. It's called the bubble ship and it is very obviously inspired by the Bell 47 helicopter, which Kosinski saw in the lobby of the Museum of Modern Art in Manhattan, and which he likened to a dragonfly. That all makes sense but, I'm sorry, that is way too obvious an inspiration, and not nearly sci-fi enough. I take my sci-fi props seriously and you have to put in more thought and effort than that into the vehicle design to impress me. 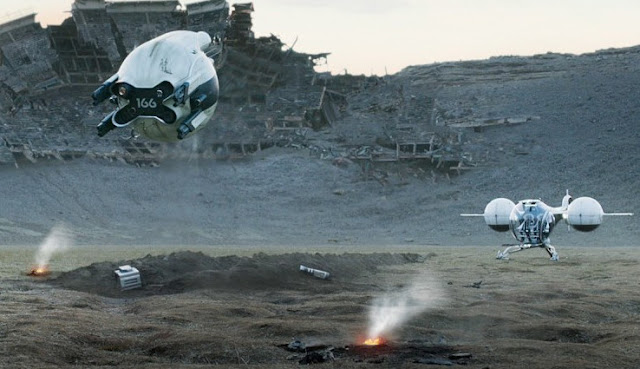 Where I do approve of the bubble ship design, however, is where the unmanned aerial drones that figure prominently in the movie are intended be part of the same design family as it. The drones are super, super cool, and I am on board with whatever design process and inspiration produced them. The vehicles and drones are just set dressing, though. It is in its architecture that the movie really makes a statement.

Tom's clone character has two houses, and there's a good reason for that. The two styles of the two houses in Oblivion represent the two sides of his character. We are first introduced to his emotionless, clone side and later find out about his more messy, human side. Of course, that dichotomy is stupid but the visuals the team came up with to hammer this difference home are beautiful in the extreme.

It is the first of the two abodes, the clone house - the one that floats unconnected to reality, up in the clouds, and that must be kept so antiseptic that not even a pot plant can be allowed to disturb its pristine perfection - that is the most interesting. It could grace the cover of an architectural magazine. It is super-modernist, almost hyper-modernist, and dominated by functionality. There is a distinct home office, a distinct jet copter landing area, a separate pool, all centered round a kitchen that is as functional as the computerized home office.

I have written, and am still writing a sci-fi series called Dark Galaxy that starts with Galaxy Dog. It is available to buy from Amazon.


Before I sing the praises of this movie too much, let me remind you that the plot is nothing to write home about, in fact, it is almost actively stupid. There are shock reveals that even I could see coming, and on a larger scale, neither the overarching story nor the setting make a lick of sense. It's worse than that, because along with being dumb, it is also sexist. It may pass the Bechdel test, but the female characters are extremely passive - to the point of being comatose and robotic. I'm guessing one of the 1970s sci-fi movies that inspired it was The Stepford Wives.

But, like I also said before, there is a lot to like. The sound design, for example, is great. The bleeps and bloops of the murderous drones are particularly threatening. They are almost as frightening as ED-209, whose DNA they seem to share in. 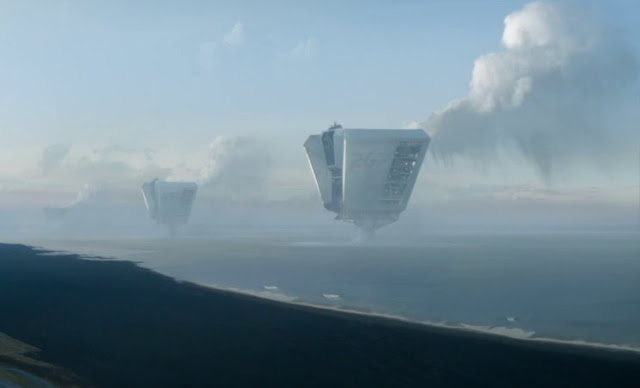 Another thing I loved was the huge, honking slabs of engineering. I am a fan of mega structures in sci-fi movies, and Oblivion has a nice example. The Earth's oceans are being boiled away, And this work is done by absolutely huge alien machines, named resource gatherers, that glint in the magic-hour sun.

The script, according to Stack Exchange, describes them thusly:

Jack shifts the Bubbleship, in the distance a series of RESOURCE GATHERERS on the horizon. Essentially titanic vacuums, sucking up the oceans.

They are destroyed at the end of the movie, though we don't see their demise. The following scene from the script was never filmed:

DRONES fall from the sky, powerless... A RESOURCE GATHERER YAWS, losing power, and falls ponderously into what remains of the sea...

They should have absolutely filmed that, no matter how much it would have added to the budget. It would have been the visual icing on the cake that is this very visual story. Come for the story, be disappointed by it, but stay for the beautiful images you see on screen.