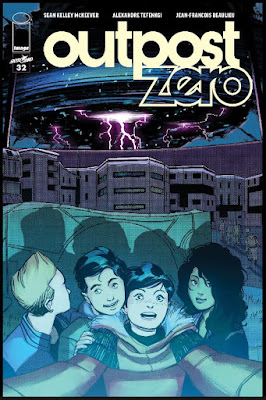 I've been blogging a lot about comic books lately, so I hesitate to write another, but... the thing is... I've found something really good. In my never-ending quest for new sci-fi comic books to read, I have happened across a publication named Outpost Zero. This is a beautifully drawn comic book, and the colors are great too. In fact, the standard of art immediately reminded me of Paper Girls, which is high praise indeed.

I also like the writing because there is none of the usual infodump you normally get at the start of a sci-fi comic book. We are just thrust into a world, and we have to make of it what we can. From what we see at fist, it looks like a habitat, such as on a generation ship or a space station, and it looks worn and rusty. After this quick look around, we meet a nicely diverse group of kids, and we hear about something called a Discovery Team that the parents of one of the kids are part of. The Discovery Team, it seams, go somewhere called The Frost. It's an economical and intriguing way of setting the scene, and I wish more sci-fi would go this route.

This all happens in just the first few pages, and we continue to quickly learn ever more about the setting, and so here I would like to take a moment and warn of spoilers. I think what happens next in the comic book is neat, and it is worth picking it up and reading it for yourself instead of having me spoil it for you here. Consider yourself warned. 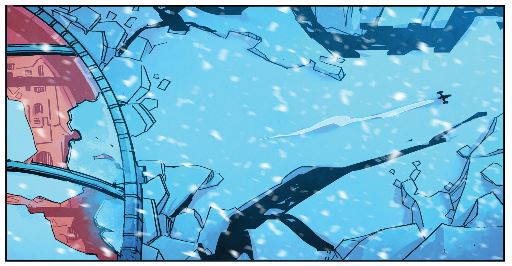 So what happens is, the parents of the Discovery Team go outside the dome, and it turns out that it isn't on a spaceship or a habitat, it's on the surface of an ice planet. We aren't told this, we see it, and it is a beautifully drawn transition from claustrophobic environment dome to open expanse of ice.


We don’t spend long out on the ice before we are back in the dome, getting to know quite a large cast of university-age characters, which makes the story feel like The O.C. Gossip Girl, or 90210 for a moment, but with sci-fi ideas added to the mix. The kids are all being assigned to teams for their life as adults in the dome. For their parents, the team their sons and daughters are assigned to is just as much a source of pride or shame as the jobs that real-life university leavers end up with. Along with the Discovery Team, there is an Engineering Team, a Services Team, and many more.

The comic keeps switching between this relatively cozy and introverted world, and the open ice. Next time we see what is going on outside – just for a moment – we see something being discovered, something that makes the people who discover it run for their transport. That's nice and creepy but there are creepy things within the dome, too. 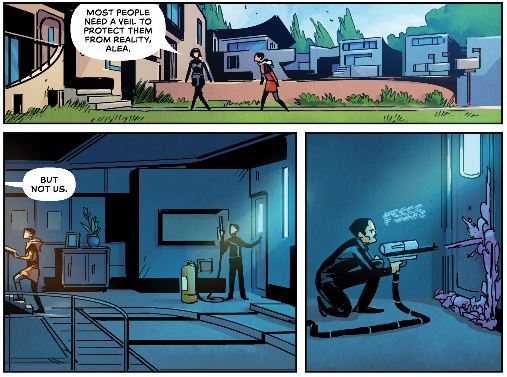 Back inside the dome, one of the characters makes a joke about euthanasia, making you wonder about whether this is part of these people's culture or not. And then we find out that an attempt to repair the settlement's radio has failed. The kids think its because the radio is too advanced and too much knowledge has been lost, but I wonder whether this might be something more sinister?

This all happens within the first half of the comic book, and there is a lot more to come before this first issue is over. We see many more intriguing glimpses of this world, and we start to see how the people are related to each other by familial and professional ties, as well as bonds of friendship. The sci-fi element are very subtle in this first issue, but there is enough to keep my interest. I recommend any fan of sci-fi to take a look.
Labels: Comic Books Image comics