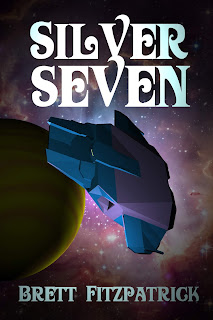 Usually with my books, such as the ripsnorting and universally acclaimed Galaxy Dog, I write the book pretty much in secret, terrified that somebody is going to steal my latest great ideas, and then I suddenly let it drop with only a blog post or two to mark its passing from my hard drive out into the world. With this promotional strategy, it is amazing to me that I have ever sold any books at all.

This time I want to do things differently. I want to talk about an upcoming book at every stage of its creation, and even allow readers to download what I have put together so far at that point, so they can see how things are coming together. For me, it's a whole new paradigm in eBook writing, self-publishing, and promotion, though as there is nothing new in this world, I'm sure this has been tried before. I'll just assume that for now because I'm too lazy to actually Google up a definitive answer.

Anyway, what I plan to do is this... I'll keep writing, and working on the cover, and when I reach the end of each new chapter I'll update the eBook file and republish it to the internet. The book will grow, chapter by chapter, like a 1930s film serial, and the cover will evolve from cack-handed 3D shapes in the vague form of a starship to a beautiful, crafted vista of space-based action. I can't actually host the file at GitHub, however, for a couple of reasons. The first reason is that I don't understand GitHub, with all its forks and tarballs and such like. Also GitHub is for "computer stuff" - I believe that is the technical term - and what I'm doing is a book. Most importantly, however, is that the stuff on GitHub, if I understand correctly, is available for free, and I definitely don't want that. I need to charge money for this, for the purposes of paying rent, keeping my place heated, buying comic books, eating, and such like.

So I considered some other file hosts, looking for one that could collect money for me and allow people to access the latest version of the book. First I checked Sendowl, simply because I like the name and logo. Unfortunately, even their most basic package costs nine dollars a month, and I am far from convinced my idea is going to generate a single cent. I can live with not making any money, that's always a very real possibility in the oversupplied world of self-publishing sci-fi, but I sure don't want to be losing nine dollars every month.

So I had to keep looking. I did a Google search, and I found FreeWebStore.com. Everything looked good, but when I signed up, their interface looked very basic. I got suspicious, went to trust pilot, and among all the BS five star reviews, I found this:

Review - You should tell people there will be ads after 2 weeks.

What!? Ads, on my eBook buy page!? No way. I mean, No Way! And they didn’t even warn me about it, in fact they said on the sign up page that it was just free and there was no catch. Obviously, these are not super honest people. So cursing myself for giving these shysters my name and email, I moved on.

Then I had the bright idea of using Etsy. However, their slogan is: “If it’s handcrafted, vintage, custom, or unique, it’s on Etsy.” which doesn’t exactly scream eBooks, and I just couldn’t go through with it. My weird sci-fi project just didn’t seem to sit well among the tea cozys and vegan cook books of Etsy.

After a bunch more research, I finally went with Fetchapp, because they have a free option and they don't seem to be sketchy. I uploaded the current state of the book, with a prologue, half of chapter one, and the first glimmerings of a cover. It can be downloaded for just one dollar, and the download link does not expire. It can be used 30 times for the same, single solitary dollar. I will update the blog here when chapter one is complete, and then again at the end of chapter two, and any other milestones that seem significant to me.

After paying the dollar, each new chapter is available for free from the same download link. Like I said, it's a whole new paradigm. To get version alpha one of this book, and all subsequent version, all for the price of just one dollar, hit the "Buy Now" button below.