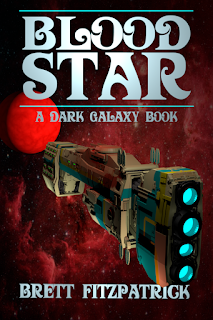 I'm working on the cover for my latest sci-fi book, named Blood Star, which is now speeding toward completion. I have written almost 70,000 words and the book will be about 90,000 to 100,000 words when done. It is part of a series called Dark Galaxy, which starts with Galaxy Dog. Here are the first two lines of Galaxy Dog's blurb, so you can get a feel of the kind of thing these books are:

The entire series is ripsnorting space opera in the style of Doctor Who and Blake's 7, and they are available to buy from Amazon. Just click the link and take a look. Or, if you have already read them, you can pre-order the latest installment, Blood Star, at Kobo.

Kobo has the release date set for February 23, 2019, which is only a few weeks away, and so, with the writing going so well, and the release date so near, I thought it as a good time to turn to getting the cover looking just the way I want it.

I have already sunk hours and hours of work into the cover, using Blender to create a 3D cover with spaceship, planet and text, rendered in front of a red starscape I found on the Internet. It has change a lot already, since the very first render I did. 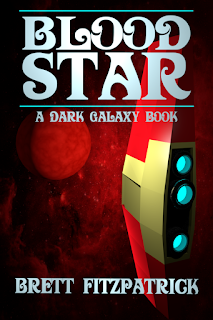 The very first cover I rendered had more character than the current one. It was a brighter red and the spaceship looks more interesting. So today I am going to brighten up the image and take the spaceship back toward the idiosyncratic vertical wing design i first saw in my mind's eye when I was imagining the cover for Blood Star.

At the moment the spaceship is a very generic, flying shotgun design, just like so many other sci-fi novel covers, computer gamees, TV shows, and movies. I think he vertical wing will give the cover a more retro and interesting feel, to suit the text font I have used in the title.

So I fired up Blender and chopped my flying shotgun up, then stacked the pieces, one above the other. Once I had the elements stacked, I extruded a giant wing/heat sink extending from the top and bottom of the stack to create a vertical design. 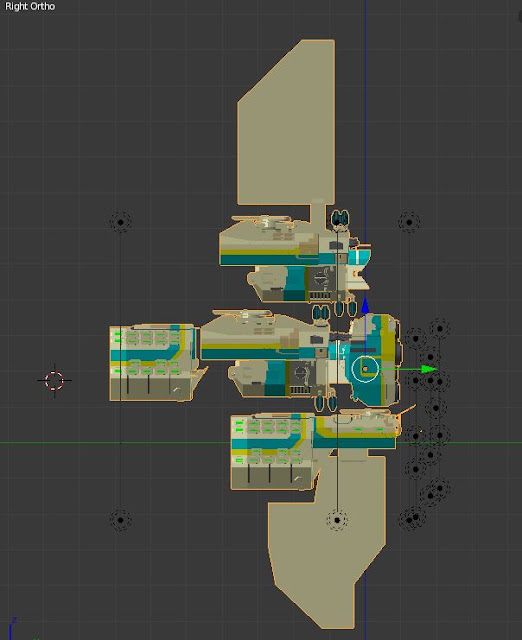 I think it has more character than the flying shotgun, and it is certainly a less phallic an generic design. It should also be easier to light. I also changed the spaceship's color scheme from a boring olive green to a blood red more befitting of the title. Unfortunately, a red planet, red starscape and red spaceship means that the whole cover merges into one. The simplest solution was to change the starscape, so that only the planet and spaceship were red. I switched the red stars out for a nice image of the Carina Nebula. 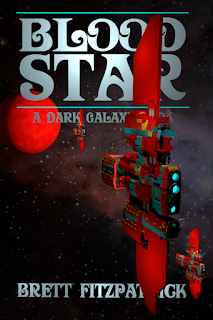 So with a background of the Carina Nebula and a vertical layout to the spaceship, this is what the cover looks like now. It's an improvement, I think. I mean... after spending hours on Blender getting the cover to look like this, I have to think it's an improvement.

There is still a long way to go, however. I still have hours and hours of work ahead of me, tweaking vertexes in the 3D scene, so when it does eventually get released, the cover of the book will look like this, only better.