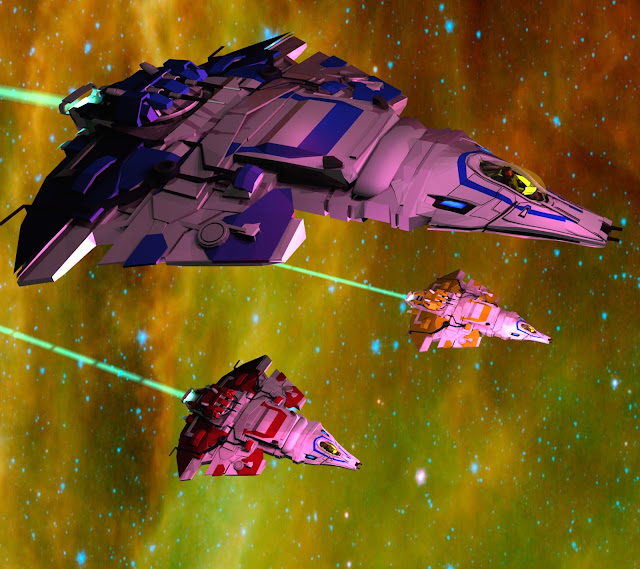 The template I have chosen for my blog requires a relatively enormous image as a banner. For a while I have a banner I designed in Blender that had three heavy space fighters patrolling the spaceways out at the edge of the galaxy. I liked it, but the blue spaceship is too big, and the space background, though beautiful, is a very yellow and distracting.

Luckily these things are all very easy to fix from within Blender. Interestingly, it is the 25th birthday of Blender, right now. On January 2nd, 1994, the first Blender version, the in-house tool in the animation studio NeoGeo in the Netherlands, was running. Blender was released publicly in 1998 as SGI freeware, with Linux and Windows versions following shortly after. Thanks to a spectacular fundraising campaign, the source code became available under GNU GPL on October 13th 2002, and Blender became the popular Free and Open Source 3D creation suite it is today. Anyway, enough about Blender, and back to the 3D banner.

The scene I have created is also actually relatively simple. There is a background object with a space scene pasted on it as a texture, one spaceship model (actually creating that is quite complex) repeated three times, a bunch of lights, and a camera. First I clicked on the blue spaceship and shrunk it to half its size. 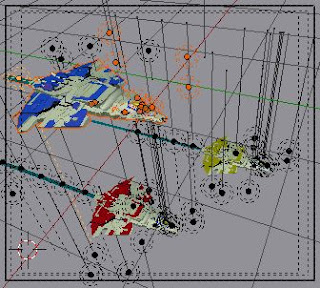 The spaceship gets a fetching orange outline when I click on it and select it. Shrinking it is easy, too. I just hit the "S" key for shrink, and drag the mouse till it looks about right. Blender is so easy. I love it so much. Next I rotated the scene so the spaceships are flying in an inspirational upward swoop, instead of diving down in despair. I then copied the spaceship again, to make four of them in this particular little squadron, and I did a render. But before we take a look at the render, just a quick reminder about why I'm doing all this blogging in the first place. I'm doing it to sell books, specifically...


Okay, with that out of the way, here's that render I promised you, with four spaceships instead of three. 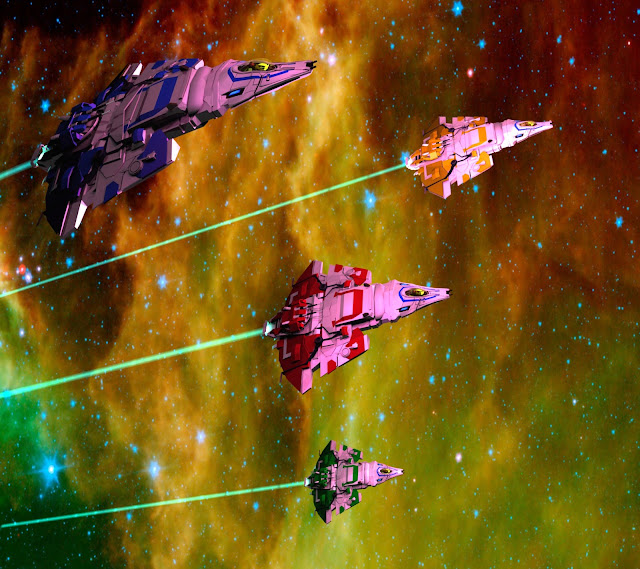 It looks a lot better, but the yellow, cloudy space background was still a little too dominant, I thought, so I went looking for a different, more subtle, view of space to use instead. I found a lovely image of
Star Forming Region LH 95 at APOD.I swapped the image used on the texture of the background object, which sounds much more complex than it actually is, and did another render. 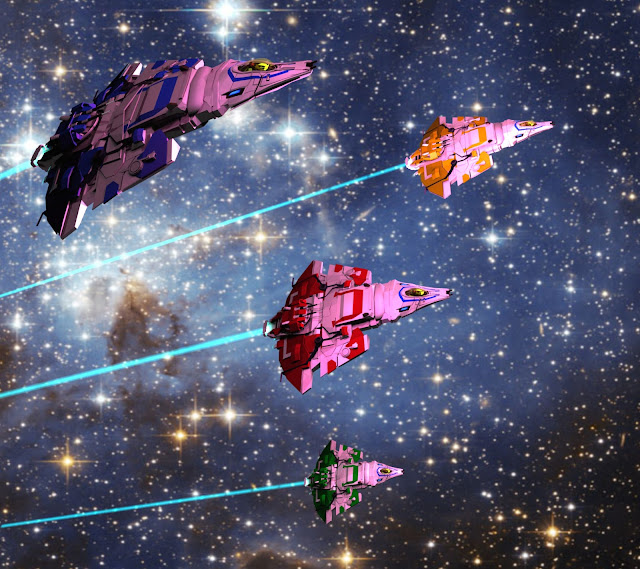 This is the version I'm going with for now, though there might still be room for improvement. None of the spaceships are firing their guns, for example. All four spaceships have a gun turret that could easily be swiveling and firing, pew, pew.