The Halo Movie That Never Was


I just read a very interesting article over at Birth Movies Death about Halo. The article says that the first attempt at putting Halo on screen, originally slated for 2008, involved writers Alex Garland (Annihilation) and D.B. Weiss (Game of Thrones), and would have been directed by then-unknown Neill Blomkamp, whose skill with visual effects primed him for such an effects-heavy project. That project fell through, but the props and vehicles built by Weta Workshop were used in a 2007 live-action Halo 3 promo called Halo: Landfall.

The Halo: Landfall promo is on YouTube, lasts a little over five minutes, and it is interesting for how good it looks, while at the same time how boring and confusing it is. There is so much potential here, and the beginning is actually very strong, so it is a shame it couldn't have carried this high quality through to the end. The video, as it stands, is a weird mix of game trailer and something better, that could have worked as a short film with just a little more work.

I write sci-fi, and there is a lot of military action in it. The books I write belong to a series called Dark Galaxy, which starts with Galaxy Dog. Here are the first two lines of Galaxy Dog's blurb:

As you can see, I am not averse at all to sci-fi taking on war and battle as subject matter or motifs.


In the opening section of Halo: Landfall we get to see a close up view of the future soldiers, along with their guns, armor, and vehicles all being manufactured on enormous robot construction lines. When I first saw these images, for a second, it was difficult to tell if the shots of combat vehicles being assembled weren't just from archive footage of present-day automobile production lines. This part is great, in my opinion. It says something about the industrialization and commodification of war, taken to extremes in the future.

Then the soldiers and all their equipment are dropped into what looks like a paintball zone, and the plot promptly degenerates to something similar to what would happen if you gave an eight year old some cool toys to play with in a sandpit. There are four or five actors, who run around aimlessly, saying random militaristic and macho things, while shooting at some SFX monsters that we are only allowed to glimpse. It's a confusing mess, where no goals or obstacles are established, and we don't really even have any idea of the geography of what we are looking at.

It is hard to see what the aliens look like, from the motion blurred views lasting fractions of a second that we are given. I got the impression that they are like taller, fatter wookies in armor. It was impossible to tell how much of a threat each one presented, and so, as a cinematic experience, even the limited combat we see is extremely unsatisfying.

The equipment used by these future soldiers is also curiously antiquated. There are no drones or robot units, and the only military vehicle used is a kind of dune buggy. Even the armor worn by the combatants is just panels of what looks like Kevlar held on with elastic straps. It is filmed to resemble footage captured in current war zones, such as Afghanistan or any of the other places the US has boots on the ground, and it is too successful. There is nothing futuristic about the images, except that the hovering support vehicles are not helicopters - they are some kind of VTOL jet things. 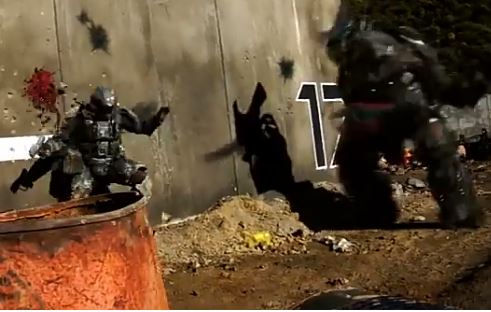 Combat is an integral part if a lot of sci-fi - my favorite franchise, Star Wars, includes it right in the title - but this is very definitely not the way to do it. The best stories that involve war are not about the making of war, they are about something bigger and more important, or something more intimate and personal, or both. This short film comes closest in the shots of the military production line at the start, where I feel it is even implied that the soldiers are manufactured, like clones perhaps. They are barcoded on the back of the neck, and presumably tracked like any other piece of equipment.

This isn't a movie, of course, or even a TV show, it's just an extended promo video for a computer game. With a script by the writer of Annihilation, and if Neill Blomkamp happened to be playing to his strengths, this could have been an interesting movie. It's a shame all we have of it are the 3D models reused in this short video.