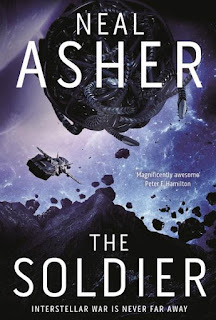 Neal Asher's book is action packed and enjoyable, but far from perfect. I'm going to launch straight in with some spoilers, so get thee gone if such things will impair your enjoyment of the book.
Rather unfortunately, the story starts with a fridging, and this character - her name is Ruth - gets brought back to life and fridged all over again. She also develops feelings of warmth for the android that kills her, which is all hella problematic.

The book also starts with copious amounts of infodumping about the universe that has built up over the various books Asher has already written that are set in this universe. Although an infodump isn't my favorite way to start a sci-fi novel, it is forgivable in the case of a setting as rich as the one Neal Asher has created over the years.

I've started with the negatives, so I'll keep going with the fact that the book also has a huge cast of characters, each one more powerful than the next, that are introduced one after another in an unseemly rush. Every time Asher invents a super-powered character, he seems loathe to let them go, so most of these characters have appeared in previous books, and are being brought back for repeat performances, sometimes after centuries have passed in the timeline of the setting since their first appearance. The characters are so numerous and so over the top in their capabilities, after levelling up over centuries, that the story is in places more like a superhero yarn in the style of Kirby's New Gods than the militarized space opera of Asher's earlier books.

Luckily for me, I am just as much a fan of OTT Kirby-type planet busting as I am of more restrained space opera. I am just as happy reading about a character that has been bitten by an alien leech (standing in, I suppose, for a radioactive spider) and become like a blue incredible hulk as I am a more conventional space hero. Along with these leech hulks, there are super-dense agglomerations of alien tech in muscular human android form and lots of invulnerable space lobsters.

Like Neal Asher, I also write sci-fi. The books I write belong to a series called Dark Galaxy, which starts with Galaxy Dog. Here are the first two lines of Galaxy Dog's blurb:


Things in The Soldier do get a bit too much like a heavy metal album cover in places, even for me, sometimes. For example there are some super-powerful war drones named The Clade that look like floating chrome backbones with crow skulls at the top. They are always better and faster and crazier than anyone else, and I hear wailing Iron Maiden guitar solos playing in my mind every time they make an appearance.

There are lots of these weird little lapses of taste, not just into heavy metal power fantasy - like a Lobo comic - but also into slasher horror. To go back to the very start of the book, the fridging is made even worse, as it is suggested that Ruth is tortured before her demise. The torture isn't presented in graphic detail, but we are informed that the victim is naked, and that the torture is for the sadistic pleasure of an alien AI. Why the heck would an alien AI take pleasure in torture? That's just weird, sexist, problematic, and should not be appearing in a mainstream sci-fi novel. This torture scene isn't the only time Asher remarks on the state of undress of a female character, either. There are several other instances of nakedness and boobies in the book.

Along with Ruth, other characters meet grisly deaths, too, and the author either delights in them or seems to think his readers will delight in them. It is similar to the way The Walking Dead throws in inventive and gory zombie deaths each week, for the titillation of a certain section of the viewership.

Despite all this, I still for the most part enjoyed the book, simply because Asher writes a good space battle. The space battles, and other combat scenes, in this book are well written, but aren't as satisfying as in his earlier books because every unit is so super powerful, only the esoteric effects of completely invented weapons can take them out. Here combatants are destroyed by U-space missiles falling through hyper gates and overloading subspace energy stores, and other such technobabble. Lots of slugs still get fired from accelerator guns, of course, but conventional attacks like these are pretty much ineffective. It's a shame that everything is "ramping up" in power so much, to use a phrase Asher employs a couple of times in every combat. He writes space battles so well, that it would be nice if it was simply spaceships taking potshots with lasers, rather than all the weird super-science that has been added on.

The book is also very much the first installment in a larger story, which does impact the reader's ability to enjoy it as a stand-alone adventure. There are some nice secrets established, concerning ancient, seemingly extinct species, and some of them pay off satisfactorily, but the feeling that this is just the first skirmish in something bigger pervades the book. It works in isolation well enough, I guess, and I can imagine reading the next one.

Like all Asher's books, it is packed with action and ideas. I just wish he would nerf some of the combatants a little, and tone down the nekid ladies and boobies. I like that his books are action driven and unashamedly militaristic - there's a place for that in sci-fi - but that doesn't mean it's okay for them to be sexist.

I could very easily understand a potential reader not wanting to purchase this book, on principle, but there is a lot to enjoy if, like me, you enjoy the spectacle of a good space battle and you go ahead and buy it despite its problems with its female characters.
Labels: Ebook reviews military Sci-Fi sci-fi novel