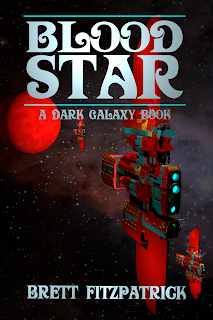 Blood Star is the latest installment in the Dark Galaxy series of sci-fi novels, and it is available for preorder through Draft2Digital. It is Dark Galaxy #5 and the release date is February 15, 2019. You can also go directly to iBooks, Barnes & Noble, Kobo, and Angus & Robertson.

In Blood Star, the heroes of the series, a man named Knave and a woman named Altia, face their greatest test yet. After taking a stand against a corrupt empire and battling alien robots, the pair have to face an invasion of creatures so powerful that it endangers not just the Tarazet Star Empire, not just the whole expanse of human space, but the entire galaxy.

Knave and Altia only have any chance of fending off this alien invasion because Altia is the foremost mind of her epoch, and she is backed up by Knave, who was just born lucky. Together they command a spaceship designed by an alien species now long dead, a spaceship only Altia truly understands, that is outfitted with such advanced systems that no human ship can match it.

Only Altia's arcane knowledge and Knave's lateral thinking can save humanity now, from a terrifying threat. A threat so implacable, unfeeling and alien that they are mistaken by most who encounter them for demons.

The monsters invading the galaxy are arriving at an exponential rate, bombarding planets in waves of simple craft that are reminiscent if medieval siege engines in their brutality. The creatures themselves are nightmarish and demonic, towering tens of meters tall, with expressionless expanses of bone for faces. They are utterly alien, and take humans for torture that has no obvious motivation.

The monsters, the Dark Wings, come from the Blood Star, a giant artificial planet that is believed to have been built by the same being who created the Galaxy Dog, though they are later entities, who have simply learned to pervert the technology of the ancients and use it to spread themselves across the universe like a plague.

The first book in the Dark Galaxy, series is Galaxy Dog. Here is some of Galaxy Dog's blurb: