I was listening to an episode of Yo, Is This Racist? a couple of weeks back (#1009 from January 15) and I was pleased to hear them taking about an issue in fantasy literature that has always struck me as interesting, which is the way people of color are described in fantasy novels. I had a little time today, so I decided to go back, listen to the show again, and transcribe their advice to authors.

Yo, Is This Racist? is a podcast run by Andrew Ti and co-presented by Tawny Newsome, where they answer listener-supplied questions about whether things are examples of racism. It's been described as funny and profane, edutaining, and a Dear Abby for racists. It is disarming in its use f humor, but covers interesting areas of modern diversity, and it isn't afraid to go into detail, but also doesn't assume knowledge in the listener. It's essential listening for anyone producing content, no matter what the outlet for their creativity. 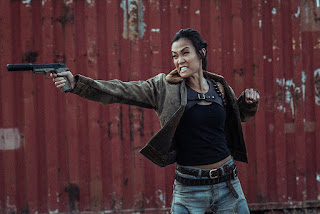 The two regular hosts are usually joined by a guest, and this episode the guest was actress Sydney Viengluang of Z Nation. The call we are interested in here, the one about diversity in fantasy novels, was the first call of the show. The caller who asks the question is a guy named Caleb, who describes himself as: "a white dude and an author," who is currently writing a fantasy book. He wants to create diversity, because he says: "most fantasy books are white guys writing about other white guys". His main character is a woman of color and a main supporting character is East Asian, so his question for the studio team is: "How can I describe her as being East Asian without it being racist and without relying on stereotypes?"

Sydney Viengluang's immediate response is to ask what even is East Asian. She describes herself as Lao, for example.

Tawny wants to give the caller the benefit of the doubt, and assumes he is working against the fact that characters are assumed to be white, unless specifically stated as being otherwise. She points out that, if you are not assuming people are white, you should have to describe all the characters in a book.


Andrew's first thought is that a lot of people will think: "Just describe them as an Asian person," but there is a great example of that not working in The Hunger Games, with Katniss, who he says is basically described as a Native American, but in the movie and in most peoples imaginations, she's a blonde lady.

As well as being an actress, Sydney Viengluang is also a writer, and she is working on a pilot with her girlfriend. She talks about when they were casting the supporting characters, and she admits that she, too, would default to white people, because that was her only frame of reference. Like this is a "Cate Blanchett type," etc.

Andrew then says that he thinks another example of this is to be found in the first season of The Walking Dead. Even though it is set in Atlanta, all the zombies are white. All three love this idea, and laugh about only white people being impacted by the zombie apocalypse, while the local black population continue to live their lives.

Then Tawny mentions Hermione from Harry Potter, and the casting for the theater portrayal.

Andrew's advice for the listener, then, after they have discussed the problem a little more, is to just go above and beyond. He thinks the author has to somehow state that there is Asia on his planet.

If it was casting, Sydney says, in support of that point, she doesn't think there is anything wrong with simply stating the role is Asian.

Andrew agrees that this works in a visual medium, but he also says he can tell the author's solution for his book is going to be: "some, almond eyes, dark cast in the skin, straight hair, type shit," and he makes it clear he is not advocating that.

Tawney says fantasy isn't her thing and she tends to roll her eyes at all descriptions of characters in fantasy books. Her husband reads a lot of them, and she can't get through one page without reading about a female character's "flowing hair". She says she doesn't feel super-qualified to tell the author how to describe his characters, but she thinks it's a noble effort he wants to make.

Tawney joins in this advice, to say: "There's this Chinese lady, right here."

Andrew continues: "When you try to dance around it, it doesn't work. Like Hunger Games."

And then they moved on to the next caller.

I enjoyed their discussion and their advice, though it raised as many questions as it answered. The show this week was as entertaining as usual and this is a subject that is very useful to me, as a sci-fi and fantasy author.

All my books have a diverse cast of characters, and I have thought long and hard about this very subject. I have read that it important to avoid using food as a way of describing people of color, which is what Andrew was alluding to when he didn't think saying almond eyes was a good way to describe the character. It's especially important to avoid using food and drink that people have been enslaved to harvest - such as coffee - to describe people's skin color, for example.

On the other hand, I think it takes you out of the world of the story, a little, to describe a character as Asian or Chinese, as they suggest to do at one moment. I think, in the end, Tawny's point that it is difficult to tell an author how to describe their characters, but that it's a noble effort and we should keep trying to get it right, is the thing that struck me as most encouraging and useful.

Before we wrap up here, just a reminder that the best way to support this blog is to buy one of my books, so why not go over to Amazon, or Kobo and see if there is one that catches your fancy.
Labels: Fantasy sci-fi novel self-publishing writing advice