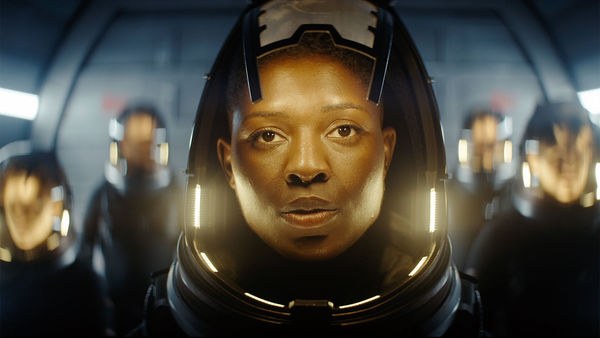 Episode six is a very nice one, and it starts with Thale, the telepath, saying he's getting messages from outside the ship. The crew detects organics out there, and at first they think it must be the Volcryn. The Volcryn are much more of a presence in this show than in the novella or movie, which is a huge improvement for the story. But it turns out that instead of the Volcryn, it is a lost ship named Eagle 16 that has been drifting for 14 years out in the void.


Rowan asks about survivors, and is told they had limited food on board, so there can be no survivors. The ship is run on the same kind of crystal matrix as the Nightflyer, and D'Branin comes up with a plan to jettison Mother by dumping her into the crystal matrix of the Eagle and then flying away, marooning the crazy old lady. 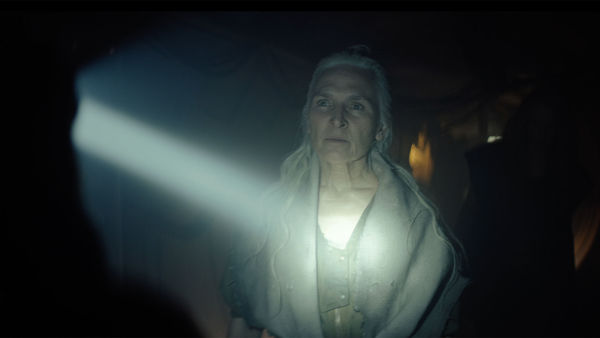 A small team, Jhirl, D'Branin, Auggie, Rowan and Lommie, goes out to the Eagle, and they find - to their surprise - that there are old humans on the ship, survivors, but something is creepy, and off. This is all excellent, old-school, sci-fi that I enjoyed enormously. It's a classic setup for a show, and it just gets better as things go on. A crew of female scientists explain they have lasted so long by farming self-sustaining resources... without going into detail about what that actually means. 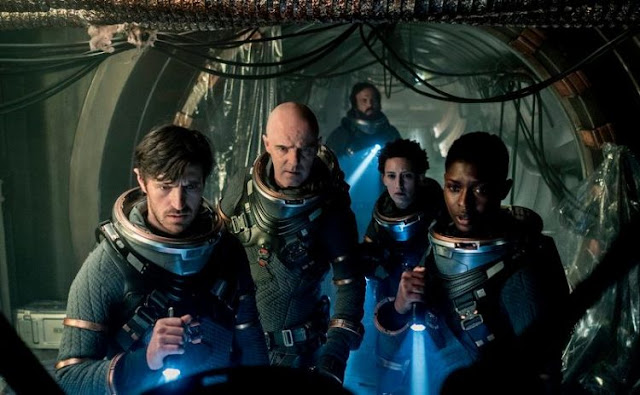 Loomie reacts badly to the way the women talk, recognizing the cult mentality of the all-female crew. She can't wait to get out of there. She and Auggie explore the spaceship looking for he crystal matrix, to dump Mother into it. The huge set, probably augmented by location work in industrial facilities, looks great, as they search through it. 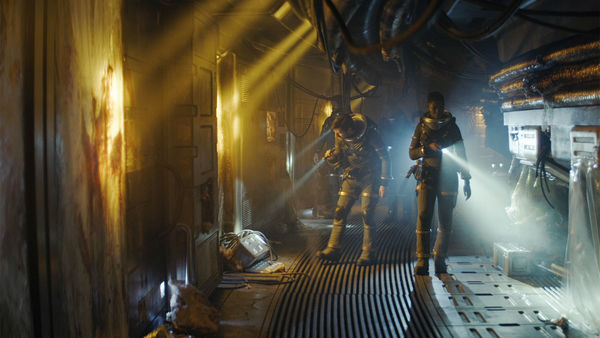 The women of the Eagle are also tracking the Volcryn, but they see it as a miracle, or a star, not an alien spaceship. More worryingly for the Nightflyer boarding party, they also see men as seed givers - the seed being used to create clones that they hang in huge plastic bags and use as a semi-conscious food source. They specifically call these creatures livestock. Cue much screaming and bloody violence, as Team Nightflyer has to escape the death ship. 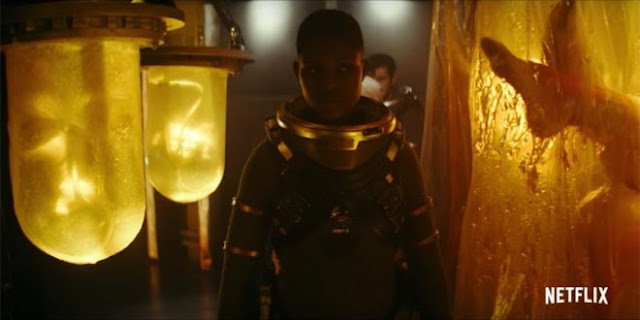 Auggie does find the crystal matrix, but shockingly smashes it. Then he lies and says it was busted when he found it. We then see he has a little shrine to Cynthia, and is loyal to, as he puts it, "The Real Captain Eris."

Things aren't over yet though, right at the end of the episode we get two messed up, but not exploitative, bedroom scenes. We see Eris in bed with Jhirl, the crystal matrix that houses his mother pulsing red above the bed. And elsewhere we see D'Branin with post-coital tears on his face, after being intimate with Matheson. The tears can only lead them to suspect that Thale is there with them, in their most private moment, watching.

It's a horrifying and great little sci-fi story that reminds me of a monster of the week show, but one that fits nicely into the themes and plots of the Nightflyer. If they wanted to extend the show's run beyond the end of season one, this episode provides a great template for how to do it.

Before we wrap up here, just a reminder that the best way to support this blog is to buy one of my books, so why not go over to Amazon, or Kobo and see if there is one that catches your fancy.
Labels: Horror Nightflyers sci-fi TV