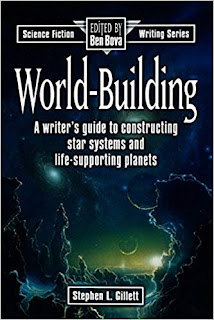 One of the most difficult things about writing sci-fi is the worldbuilding. There is even a book about it. The book is literally about creating believable worlds, planets in other words, but there is a lot more creation to do than that. You have to create the galaxy that these planets float about in, including the politics, alien inhabitants, extent of human exploration, history, including ancient aliens... etc... etc

Suffice it to say that there are a lot of decisions to be made about the background of your sci-fi book. One of the first choices to make, for example, when creating the setting for your sci-fi opus, is the technology level. Is it going to be a hard sci-fi type of setting, as seen in The Expanse, or something more pulpy, with laser swords and a space station the size of a moon, like Star Wars?

In my books, there is a lot of super science, the kind of stuff that we are pretty sure will never, ever be possible, but makes space opera more fun, such as FTL, artificial gravity, and instantaneous hologram communication between distant stars. None of that makes any sense, scientifically, but all these technologies are, more of less, ubiquitous in my setting. All these technologies have, in fact, been in use for so long that they are unremarkable. People in the setting react to AI the same way we react to a toaster, in other words it's useful to them but nothing amazing.

There are a couple of technologies, however, that I have reserved for just the heroes of the series, Altia and Knave. They have a super-advanced, ancient spaceship, with systems that allow them to teleport, and some tother neat stuff. Their ship is faster, stronger, and has more powerful weapons, so it runs rings around any single ship sent against it. It can still be ganged up on, of course, but head-to-head, it always wins. Teleportation, especially, is something that the enemy, the Tarazet Star Empire, does not have, and it gives Altia and Knave a huge advantage.

I have however noticed that, as the series has progressed, the Tarazet Star Empire has moved its resources to counter the threat posed by Altia and Knave, and their kick-ass starship. Our heroes have provoked a spurt of research and development from the empire, so that it has been fielding improved fighting units against them, such as a new spaceship called the swift destroyer, followed by special capture ships, each design more powerful than the next, each design more difficult for Altia and Knave to escape.
.
In fact, as I wrote more novels in the series, a certain problem started to threaten to rear its ugly head: Power Creep. It's a term that comes from gaming, and describes the process in which newly-added-content (like new magic spells, monsters, character classes, or in my case spaceships) is far more powerful than what was there before. This gets out of hand really easily, particularly in a long running series. Power Creep shows that the writer is unable to come up with something creative, and instead has resorted to repeating themselves, just with bigger and cooler stuff. It' a really easy trap to fall into, and so I have to remind myself not to allow each novel to have the same plot, except with slightly improved technology each time.

The post continues below but why not check out the sci-fi novels I'm talking about here. They belong to a series called Dark Galaxy, which starts with Galaxy Dog. Here is some of Galaxy Dog's blurb:

The entire series is ripsnorting space opera in the style of Doctor Who and Blake's 7, and all the books are available to buy from Amazon. Just click the link and take a look.


Similarly there is also the related problem of Uniqueness Decay. In many series, something unique (like Altia and Knave's kick-ass spaceship) is first introduced as special - new, awe-inspiring, mysterious, and utterly one of a kind. Then, later in the series, the unique example becomes just one of many, and the awe becomes...meh. This is also a problem I have to guard against in my books.

The power behind the throne of the Tarazet Star Empire, as emperors and empresses come and go, is the head of the Ministry of Science, a woman named Shivia, and it makes sense to me that she would be experimenting to reverse engineer teleportation, based on technology she has captured and the effects she has observed in her battles against Altia and Knave. But how successful should she be in her attempts to copy teleportation technology, for the use of her evil star empire? And, if she manages to crack it, how quickly should she be able to introduce it? I want her to make believable progress, and cause problems for our heroes, but still avoid uniqueness decay.

Just because I have started writing my books, does not mean that my world-building task is over. There will constantly be such dilemmas, like whether to let everyone have teleporters, or keep them unique to the heroes' spaceship. It is an ongoing battle, but hugely important. Arguably, for sci-fi, it is the worldbuilding that is the most important element of the project, and it is certainly the worldbuilding that makes watching Star Trek vs Star Wars vs The Expanse, such a different experience.

Before we wrap up here, just a reminder that the best way to support this blog is to buy one of my books, so why not go over to Amazon, or Kobo and see if there is one that catches your fancy.
Labels: Worldbuilding