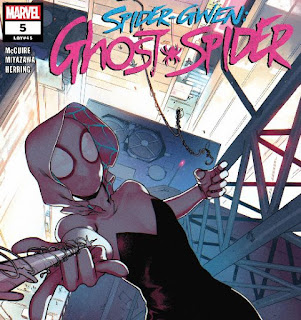 I was reading issue 5 of Spider-Gwen: Ghost Spider, after not catching any of the preceding four issues. I know in these days of digital comics and the Internet, I could easily hunt them out, download them, and start reading this story at issue one, but that always feels like cheating to me. 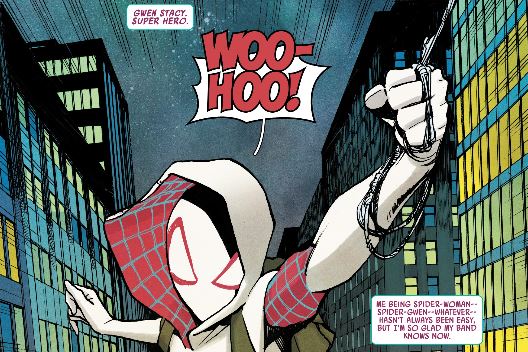 In the old days, if I saw issue four or five of some comic book on the newsagents’ shelf, that would be where I had to start reading. There was no going back in time to get earlier issues, and I still feel I should be able to jump in late, and be told everything I need to know. A good comic book shouldn’t send you hunting through back issues for vital information. By that standard this is a good comic book, with this issue gently easing me into the Spider-Gwen universe, and catching me up with what I needed to know without slowing the story it is telling.

The story starts with rehearsals of the band Spider-Gwen is in, and some nice interaction between her and her bandmates. It is just some very realistic bickering and power dynamics in a small group, the sort of thing we have all dealt with, at school, or work, or whatever, but nicely observed and fun to read. Then we see Gwen as Spider-Woman, swinging through town to get faster to a date at a diner – and we see her change out of costume when she arrives. It sounds innocuous but my jaw dropped when I saw her change costume, because it just melts away, like a symbiotic creature... like Venom, to be precise. In the next couple of panels it is confirmed that she has an alien costume with which she is living in symbiosis. I guess I shouldn’t be too surprised to see the character anywhere, after the success of the movie, but I was not expecting Venom as a guest star in Spider-Gwen. 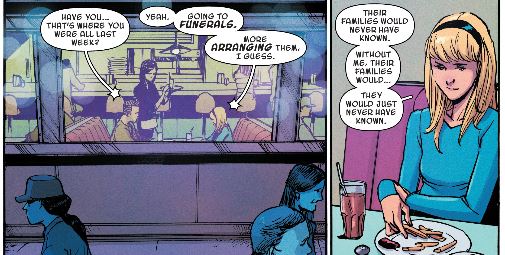 Gwen goes into the diner to meet the Lizard, and the scene is nicely drawn. The two of them sit in a 50s-style diner booth, which looks great, but there didn't seem much point to it. It felt like I was a third of the way through the comic book, already, with nothing much having happened.

I was so confused by this Lizard that I hit Wikipedia to try and work out his significance here. Wikipedia says:  On Earth-65 where Gwen Stacy became Spider-Woman, Peter Parker became this universe's version of the Lizard. Peter ended up dying towards the end of a battle with Gwen and she is blamed for his death, causing an uproar for her arrest, with Peter essentially becoming Gwen's Uncle Ben. It is later revealed that Curt Connors, a teacher at Gwen's high school, was studying Lizard genetics, and is possibly involved in recent sightings of multiple Lizard-people wreaking havoc on the city.

This guy is called Harry, not Peter or Curt, so he must be one of those multiple Lizard-people, I guess. Milkshakes with the Lizard doesn't last long, and then Gwen is back in motion, swinging away across the city.


On the way home, somebody asks her to keep an eye out for a lost purse, and things suddenly clicked for me. I started to think that this issue is about establishing Spider-Woman's home life. It didn't look like anything superheroic was going to happen at all, and that was the point.

In the next scene, her father is waiting for Gwen at home, and my jaw dropped again, when I saw that she wears her costume in front of him... “So I guess he knows her secret identity,” I thought to myself. Their meal is cozy and domestic, and then we cut to next day, when Gwen is going to enroll at community college. At college, two young women ask her if she is Gwen Stacy, Spider-Woman, and she says yes. This spooks her and she runs away without enrolling at school. It wasn’t just her that this spooked, it was me, too.

It was suddenly obvious to me that everyone knows Gwen's secret identity. In fact it turns out that this is what the story is about. We are being shown a cozy, normal life, because Gwen doesn't believe she can have one anymore. We are given a taste of normality and then it is snatched away, as Gwen literally runs away from it. She is making a conscious decision to be an outsider.

How she blew her secret identity isn't explained in this issue, but we do find out that Gwen also went to prison. There sure is a lot going on in this issue; symbiotic alien costume, no secret identity, a prison stretch. I wasn’t expecting any of that, and it all sure is strange, but I am intrigued. I do find myself wondering how this is all going to play out, and more cynically, how swiftly it will be reconnected away so she can resume her secret identity.

After Gwen makes the decision to be a superhero outsider, it feels inevitable that the superhero-action stuff and fighting - so far missing from this issue - will return, and sure enough her spidey sense tells her about a jewelry heist that she can foil.

Then there's a fun thing where she talks to spiders, like Aquaman talking to fish, and gets them to find the lady's lost purse she was told about at the start of the issue. As far as I know, that’s the first time Gwen has used that power.

One of the weirdest things in this issue, on top of all the other weirdness, is that Gwen takes payment for the return of the purse. She wonders: "is this wrong?" and I find myself wondering the exact same thing. I only dip into Spider Gwen from time to time, and it always surprises me, but this issue upset my expectations more than most. In a good way. Mostly. I may be back next issue to see where Gwen's new, outsider, secret-identityless life will take her. Is she going to become a dark, brooding type? Who is the Ghost Spider mentioned in the title? Okay, I'll definitely be picking up the next issue, or downloading it, at least.