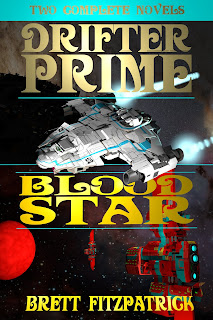 There is a tradition in sci-fi of double books. Ace Books are most famous for these editions, and they published 221 science fiction Ace doubles between 1952 and 1973, with the two books upside down in relation to each other, then a further 40 between 1974 and 1978 in a more traditional format in which the two books are both the same way up. They aren’t the only purveyors of the format in sci-fi book history, however. A series of such books was published by Tor, the Tor Doubles, between 1988 and 1991.

It occurred to me that my two latest sci-fi books, Drifter Prime and Blood Star, would make a very good pairing, for an Ace Books-style double book. The two books are self-contained stories, but they both deal with the effects of an ancient alien megastructure coming to life. Both books feature the heroes traveling to this site, named Drifter Prime, and what happens there. The story of this ancient artifact is then wrapped up at the end of the second of the two books.

My books have been underperforming on Amazon recently, when compared to other outlets such as Kobo and Smashwords, so I decided that I would aim the project squarely at Amazon first, and then make any changes needed to accommodate other distributors later, so the double book is available from Amazon now.

The first step in combining the two books into one was to fire up Blender and create the cover. When I started, I had in mind a kind of double cover with the two original covers separated by a lightning flash. I created the covers of the two books myself, and so I have the Blend files. It’s so great working with Blender, because instead of a static painting, every element of the images is a separate element that can be move independently. This means I can smush everything on the Drifter Prime cover up into the top half, and smush everything from the Blood Star cover down into the bottom half, render them again, and put them together with GIMP. The whole process took just an hour, maybe a little more. In the end, the lightning strike didn’t quite work, so I used just a straight line across the middle to separate the two book coves.

After I was happy with the cover, I turned to the content. Obviously both books are already written, so I just had to put them together. I fired up Kindle Create, to be able to make the perfect ebook file for Amazon. One of the big advantages of using Kindle Create is that it is easy to add drop caps at the start of the first paragraph of every chapter, which I very much like the look of.

The blurb I wrote goes as follows:

This book combines the two latest installments in the Dark Galaxy series of sci-fi novels. This book contains Drifter Prime and Blood Star in a double edition. The heroes of the series, a man named Knave and a woman named Altia, face their greatest test yet. After taking a stand against a corrupt empire and battling alien robots, the pair have to face an invasion of creatures so powerful that it endangers not just the Tarazet Star Empire, not just the whole expanse of human space, but the entire galaxy.

Knave and Altia only have any chance of fending off this alien invasion because Altia is the foremost mind of her epoch, and she is backed up by Knave, who was just born lucky. Together they command a spaceship designed by an alien species now long dead, a spaceship only Altia truly understands, that is outfitted with such advanced systems that no human ship can match it.

Only Altia's arcane knowledge and Knave's lateral thinking can save humanity now from a terrifying threat. A threat so implacable, unfeeling, and alien that they are mistaken by most who encounter them for demons.

The monsters invading the galaxy are arriving at an exponential rate, bombarding planets in waves of simple craft that are reminiscent of medieval siege engines in their brutality. The creatures themselves are nightmarish and demonic, towering tens of meters tall, with expressionless expanses of bone for faces. They are utterly alien, and take humans for torture that has no obvious motivation.

The monsters, the Dark Wings, come from the Blood Star, a giant artificial planet that is believed to have been built by the same beings who created the Galaxy Dog, though they are later entities, who have simply learned to pervert the technology of the ancients and use it to spread themselves across the universe like a plague.

Go to Amazon to buy the book.