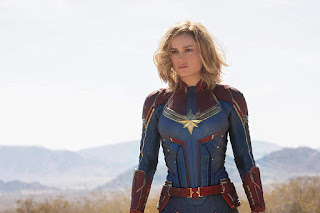 I have, at last, managed to get myself out to the cinema and watch Captain Marvel, which is predictably great. Marvel know what they are doing when they make a superhero movie these days, and rarely now put a foot wrong. At first I thought it is very much like the first Thor movie- there are lots of fights in the desert and small-town America, after all - so if you liked that, likely you'll probably enjoy this. 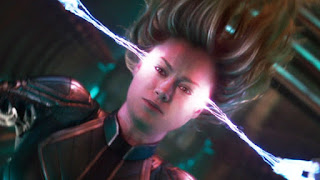 But thinking about it afterward, there are some differences, such as the complexity of Captain Marvel's origin story - which this movie is a  cinematic version of - and the shades of gray in the battle between good vs evil. It's a movie that as a lot going on that isn't obvious at first glance, but add to the action on screen. The central character, Carol Danvers, reflects this greater complexity. She is a much less bombastic, much more introverted character. She's a character who doesn't know who she is, but does know who she wants to be. We really get to explore who Captain Marvel is, as she interacts with different people and gets mind probed by the Skrulls. I was very impressed with Bree Larson's take on this driven character. She inhabits this alien, emotionless creature, but allows flashes of humanity to come through that light up the screen.

The theme of Captain Marvel overcoming other people's doubts in her, many of them for stupid, sexist reasons, is great, and I like the twist that she is doing it all solely for her. She doesn't feel that she has anything to prove to anyone. 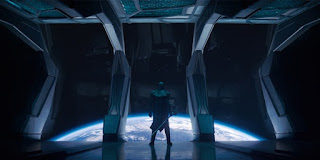 I also loved all the space combat. Spaceship action is my jam, and this movie has it in spades. The spaceships are beautifully designed, the action makes sense, and the CGI is slow enough that you can see what was going on. Marvel still hasn't perfected their CGI, and there were moments when people - and cats - looked a little unconvincing, but the CGI people at marvel have been under-performing in this area for so long and in so many movies that it is almost part of the genre. 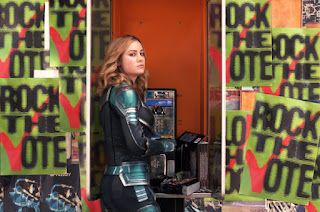 Captain Marvel is political, too, which I got a kick out of. It isn't as in your face as recent episodes of Supergirl, but you do get the feeling that the current White House led revival in the alt-right across America has not gone unnoticed. She's a superhero, a fallible human, an alien, a political icon, and a lot more besides. She's complex, and so is this movie. The complexity in this character, it is not something newly bolted on for the movies. Captain Marvel is one of the most convoluted and confusing heroes in comic book history, and for Captain Marvel that is a long history indeed.

Why not also check out the sci-fi novels I write. They belong to a series called Dark Galaxy, which starts with Galaxy Dog.
The entire series is available to buy from Amazon. Just click the link and take a look. 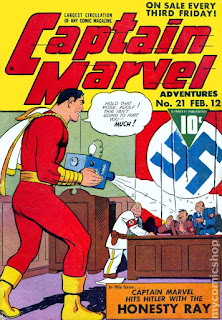 In 1940, Fawcett Comics published the first version of Captain Marvel, until they were forced to cease in 1953 due to a copyright infringement suit from DC Comics. DC thought this original Captain Marvel was too much like their Superman. Like Superman, he took on the far-right, and the were liars back then, too. Not much changes. 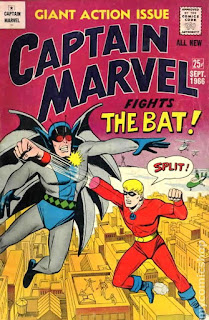 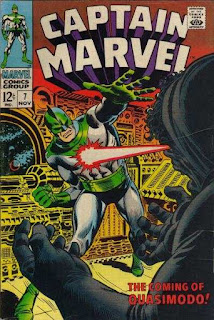 This new Captain Marvel, or "Mar-Vell", was an alien of the Kree, who had come to earth as a spy before coming to identify with his human neighbors. The series was not a hit with readers, and this is where things get even more complicated. 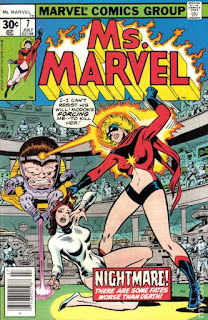 A spin-off series, Ms. Marvel, was launched in 1977 as a female counterpart to Captain Marvel. From this point there would be various heroes and heroins operating as either Captain Marvel or Ms. Marvel at any one moment in time. Carol Danvers was the first character to use the moniker Ms. Marvel, but she soon dropped the name and became a mainstay of The Avengers, where she used the code names Binary and then Warbird. 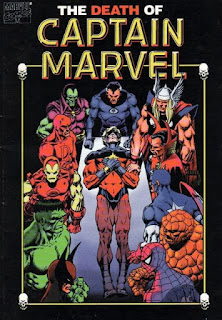 Mar-Vell as Captain Marvel, in the meantime, went from one cancelled run of comic books to another, never really gaining great popularity. He was finally killed off in Marvel's first graphic novel, The Death of Captain Marvel, in 1982. 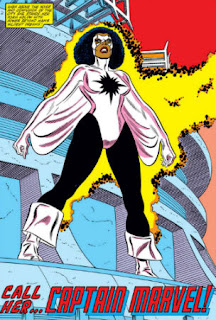 That same year is when Monica Rambeau became the bearer of the name Captain Marvel. She is the first incarnation of the character I saw featured in comic books. When she first decided to use her powers to fight crime under the name of Captain Marvel, she was told by Ben Grimm that the name had originally been used by the late Kree hero Mar-Vell, but Grimm assured her that "Marv wouldn't mind. I probably ain't the only 'Thing' in the world either." 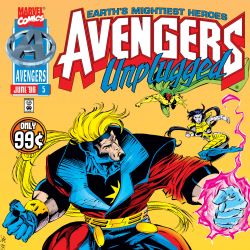 Then the son of Mar-Vell turned up, a guy named Genis-Vell. He was known as Captain Marvel like his father before him. Genis-Vell tried to concede the Captain Marvel title to Rambeau since he felt she was more worthy of it. Rambeau declined out of respect for the Mar-Vell legacy and adopted a new alias: Photon. Genis-Vell was then killed by Baron Helmut Zemo in 2006. 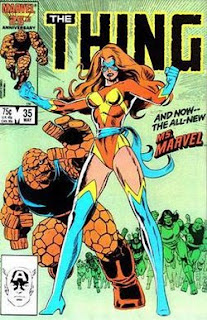 While this was going on, things had also been complicated on the Ms. Marvel side of the coin. After Danvers abandoned the name, Sharon Ventura became the second Ms. Marvel, but - although she never officially retired her Ms. Marvel moniker - she became more popularly known as the She-Thing. 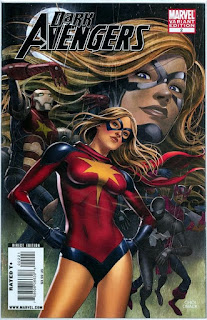 Then the supervillain known as Moonstone joined the Dark Avengers, as the doppelganger of Carol Danvers. She became the title character of the Ms. Marvel series from June 2009 until Danvers took the title back in January 2010. 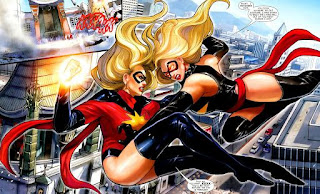 That's when, in July 2012, Danvers assumed the mantle of Captain Marvel in honor of its dead, original holder, Mar-Vell. It was Captain America who told her that Mar-Vell would have wanted her to have it. 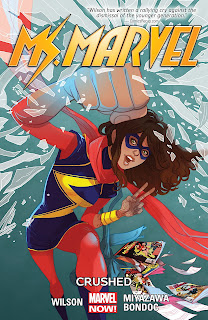 This meant the slot as Ms. Marvel was vacant again. To fill it, along came Kamala Khan, in November 2013, to make the fourth character to take the name Ms. Marvel. She is a 16-year-old girl who idolizes Carol Danvers, and is also Marvel Comics' first Muslim character to headline her own comic book.

So after over half a century of complex comings and goings, and a long list of characters - some more worthy, some less - we have a Ms. Marvel and a Captain Marvel that seem to be pretty much fixed, for now. Of them all, though, it is Carol Dancers who has resonated most strongly with both names and with the public, and I'm glad it was Dancers that the studio decided on to be the cinematic Captain Marvel. I would also have been quite happy to see Monica Rambeau chosen, but she was in the movie too, and I assume we will be seeing more of her in future, maybe as Photon. (You heard it here first, folks). 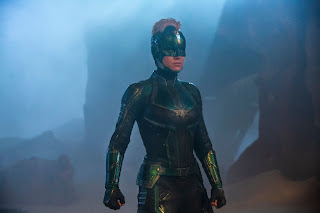 Another area where this movie makes the right call is in Captain Marvel's look. They have given her what is variously described by the characters round her as a "rubber suit" or "SCUBA equipment". It's a powerful look, but when Marvel Studios president Kevin Feige talked with Larson about taking on the role, one of the first issues to come up was the earlier designs of the character’s suit, and it is easy to understand why. 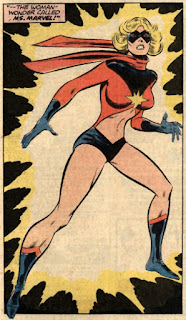 The early Captain Marvel costumes are sexist trash. In the first comics, Carol Danvers as Ms. Marvel wore a crop top, bikini bottoms and boots, and her costume only got worse from there. It got to the point where she often wears just a one-piece bathing suit. In fact, the outfit looks more like a fetish costume than a superhero suit. 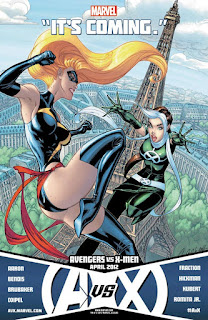 Captain Marvel's black PVC swimwear was so bad it was impossible not to be wondering why the high-cut swimmers didn't ride up her butt. The design was so pornographic that, even though I was interested in the story, there was no way I could but it, and be seen reading it on the bus. 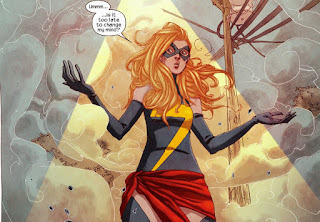 Amusingly, in the early issues of the latest version of Ms. Marvel, when Kamala Khan first states to Captain Marvel that she wants to be her, she adds:

“Except I would wear the classic, politically incorrect costume and kick butt in giant wedge heels.”
But, of course, when she turns into that version she can’t walk in the heels and the outfit delivers “epic wedgies.”

Khan then moves to her chosen costume, which is basically a short dress over tights, finding it infinitely more practical and also better representational of what teenager girls would choose to wear.

Both Captain Marvel and Ms. Marvel have left the old sexist costume behind, and that's a good thing. This was just one of the things going on in this complex movie. It's a movie that really rewards viewing, especially if you like spaceships.
To end, just a reminder that the best way to support this blog is to buy one of my books. Simply go over to Amazon, or Kobo and get one.
Labels: Marvel