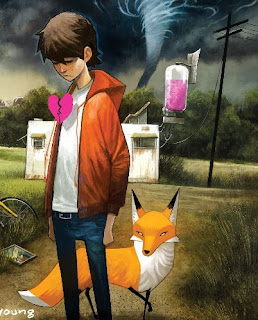 I have seen the beautiful covers of Middlewest around, but I hadn't realized it was a sci-fi title. I assumed it was a comic book set in the present, in our world, but it is not. I just saw a robot on a recent cover, which is what tipped me off, and suddenly I'm interested. I've decided to give Middlewest a try, and I want to do it right, not just grab the pretty comic with the robot on, so I'm starting Middlewest at issue one. There are no robots, but it is a very attractive comic book.

The first impression is of a world very much like ours, except for some unfamiliar technology in the corners and the eaves of the houses. There's a little kid, with an abusive father, and some heavy hints in the first half of the episode that the mom is out of the picture, specifically a broken family snap, destroyed by the father's anger. The second part of the episode sees pops explicitly tell the kid why his mom left, and the only tension was waiting to find out if she died in childbirth or went off to have fun. Spoiler: It's the latter.

People still read newspapers in the world of this comic book, and there is a 50s vibe, but the houses have intravenous drips held up as if they can defy gravity, hinting at a super-advanced technology, akin to magic.

There is one more ingredient in the mix, the kid has a talking fox for a friend, so it is either quite different a world to ours, or this is the kid's imaginary friend. My money is on the fox being a Hobbes-like figment of the messed-up kid's imagination. Either way, it'll be interesting to find out.

In support of the imaginary friend theory, the drawing style is more Calvin & Hobbes than the usual superhero comic book, but I don't dislike that. It is the writing so far that is a little meh. Issue one is all setup, the sci-fi is all background props and magical realism, and there certainly haven't been any robots yet. If I hadn't seen robot covers on issues in this comic's future I would probably not have been interested in getting issue 2, but I have seen them, and I will stick with this comic book. 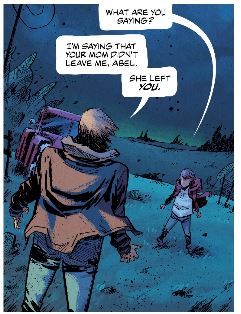 The writer is a guy calked Scottie Young, and he says in a letter in issue one that he just wants to write about the place he's from, the Midwest. Let's hope the book turns into something more than that, real soon. And hopefully it can be a little fresher and less tropey. This episode, for example, hits the missing mom trope, and hits it hard.

According to TV Tropes.com this trope was unbelievably prevalent in 1970's American television, where it was frowned upon to talk about divorce. Writers would find it hard to write for both parents and would usually limit themselves to just the one. Such plots generally involved a less-than-ideal parent and a troubled child and the one parent who could solve the conflict is dead or absent, with the mom or dad being the toss-up depending on the gender of the child. All that sure fits here.

Despite this trope, it's an exciting and enjoyable read, and I'm hoping for big things from this pretty, pretty comic book.