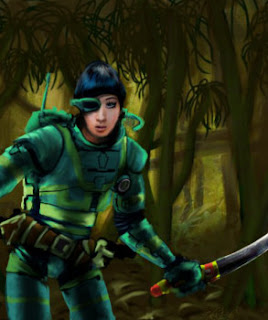 Sci-fi flash fiction is very short stories, of 500 to 1000 words, and the story in this post almost counts, but not quite. This story is 1,300 words, but I couldn't see any obvious fat that could be excised, and certainly not in the region of 500 words. So I had a freshly written story, but too long to be called flash fiction. You can read it below.


Prologue to the Tarazet Deep Space Navy Report on Piracy - In which the careers and exploits of many terrible space pirates are itemized and described. Confirm security clearance for sense data relating to the worst of them: Jarak Red Hands... Confirmed... Commencing stream...

The pirate ship was large and powerful, unlike some of the tugboats and garbage scows that raised the jolly roger, it was a ship to be reckoned with, and it was entering orbit around its latest target.
"What do we have here?" the captain asked the first mate, a brute of a man with badly grafted cybernetic arms, called Hoyan.

Hoyan was on the other side of the bridge, on the level below the captain's elevated command and supervision position. He was talking with a young woman, a scientist skilled at planetary survey and interpreting sensor scan readings. Before she had joined the crew, they had been forced to rely on the ship's computer to interpret the sensor results. The captain remembered, and shuddered at the thought of all the time they had wasted investigating ghost towns, looking for booty that just wasn't there.

"Several settlements on a freshly terraformed world," Hoyan said, as he crossed to the captain's command station and ascended the few stairs separating it from the rest of the spacious bridge. He gestured at the woman he had just been talking to, "Gyga has picked out the one likeliest to have the richest pickings, a place called Hub Port."

"Sounds promising," the captain nodded. "Crew the dropship and bring back anything you think will be useful."

Hoyan nodded, he didn't think there would be any treasure to be had, but spare parts, consumables and new equipment was just as valuable to a pirate ship.

Every hologram projector across Hub Port activated, including out in the glasshouses. In glasshouse West-15G9, the only occupant, a technician called Silvoche, turned from the plants she was repotting to look at the hologram. The hologram was a woman, reproduced life-size, with only a greenish tint to her flesh and clothes, and a slight glow as the only signs to tell she was made of nothing more substantial than light. Silvoche immediately recognized her as the head of planetary security, one of the colony VIPs, and her face was grim. It was obvious before she opened her mouth that something was terribly wrong.

"People of Hub Port," she said. "We are under attack by a pirate ship. This is not a drill. Remember your training an-"

The hologram flickered and cut out. Silvoche's brow wrinkled in concern. She put down the pot that was in her hands, the healthy plant sample inside already six inches tall, and touched the communicator at her wrist. Her dirty finger left a smear of soil on the device's shiny face.
"No signal," its little screen told her.

She tutted in annoyance, then her head came up, her attention caught by something seen through the tough, transparent plastic panels of the glasshouse roof. She saw flashes. She was no expert but she could easily imagine it was pirate ships exchanging fire with the planet's orbital defenses.
She stood at the potting bench, transfixed, unable to decide what to do. She wasn't on the security team so she had no role to play in defending the colony. All she had ever been told to do was find a safe place, and wait for the raid to be repulsed. She had seen their orbital defenses for herself, when she had been in orbit working on the orbital station's hydroponics. She had no doubt the raid would he repulsed, just like in all the training simulations. Only small, illegal colonies had anything to fear from pirates.

She wondered if there was a safer place to run to than an outlying glasshouse full of tiny plant pots, each one with a sample of one food crop or another at various stages of development. She glanced around, to reassure herself that there really was nothing of value in the glasshouse, but she couldn't see anything that would be of any interest to a pirate. There were no jewels or gold coins, even the trowel she was using for repotting the plants was a simple plastic tool. She decided she would be safe enough in her glasshouse, and continued to watch the show.

She saw flashes of lightning arcing across the heavens, which she decided were probably ion cannon. Then the shooting stopped, and she breathed a little sigh of relief. The pirates had obviously been repulsed, and communications would return in a few minutes.

The dropship, painted red with a skull and crossbones on the nose, skirted the cloud of debris that was all that was left of the nearest ion cannon, then inserted itself into low orbit for a landing. Hoyan looked at the various landing places the dropship's tactical suite was suggesting, and chose one to the west of the main settlement, just as an alarm started to sound.

"We are being targeted by missiles," the pilot yelled across at him.

"So the colony has atmospheric units," Hoyan mused, "That's impressive."

"Do we abort?" the dropship pilot asked.

"By the powers, no," Hoyan growled. "I never turn back once I've touched an atmosphere. Get to the guns, you scurvy dogs. Let's start shooting back."

Silvoche had returned to her work when she heard the first explosion. Her head jerked up and her eyes went wide.

The pirates should have been long gone by now, fleeing the Tarazet Navy's Piracy Suppression Fleet, who were surely now on the way. And, if the pirates hadn't yet fled, and the fighting was up in orbit, how was it possible she had heard an explosion?

There was a scream of scramjet engines, a drone streaking overhead, its passing making every transparent panel of the glasshouse shake, then more explosions.

"They got past the orbital defenses," Silvoche muttered, glancing again at her communicator, but it was still dead. She watched anxiously through the glass roof, trying to work out what was going on. There was some structure descending from orbit on gravitic drives, like a giant arrowhead suspended in the sky, and around it were swarming her planet's defenders. A whole squadron of drones, powered by scramjets and hung with missiles.

"Kill it," she whispered, eyes staring at the descending arrowhead, watching the missiles of their drones streak toward it.

But it somehow seemed to be shrugging the attacks off. The drones, on the other hand, were simply being swatted out of the sky. Silvoche's mouth slowly started to hang open as she realized what she was looking at. The pirates were forcing their way through the planet's defenses and they would soon land at Hub Port. She also realized that the huge dropship, a fortress of a thing, wasn't coming straight down. It was gliding lower, gradually coming closer.

She looked to her right, through one of the building's transparent walls, and saw a wide open expanse of concrete, a huge slab just put down to accommodate phase five of the city's expansion. Work hadn't yet begun and it was still completely undeveloped. It was the perfect place to land a dropship. They were coming right to her, and they were just seconds away.

She reached for her sidearm, a simple blaster pistol intended for protection against the local megafauna, and wondered if it would be any use against the pirates. She stared at it in her hands, which were still dirty, stained red, from the local soil in the plant pots.

"Well, Jarak Silvoche," she whispered to herself, "you did want adventure."

"Remember," Hoyan said to his band of raiders, gathered at the tail ramp of the dropship, waiting for it to lower and let them loose to go screaming through the settlement. "Get all the booty you can, but we also need hydroponics supplies, and a technician who knows how to use them."

...end of stream. And so began the pirate career of Jarak Red Hands.

This story is set in the Dark Galaxy universe, where a series of books is set that starts with Galaxy Dog. Here is some of Galaxy Dog's blurb: