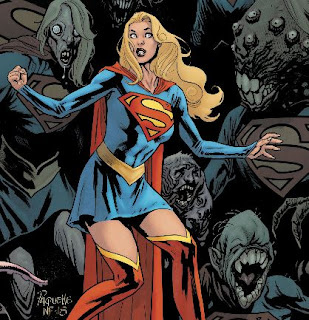 I like sci-fi comic books and, for me, Supergirl counts. Sure, there are a lot of people in spandex flying around, but there are also a lot of aliens, robots, and spaceship, too. This issue, the cover is great, with a colorful Supergirl standing out in stark relief against a grey, subdued and threatening background. It doesn't betray much about what is going to happen inside the comic book, but it does promise that whatever is going on, it's going to be good. 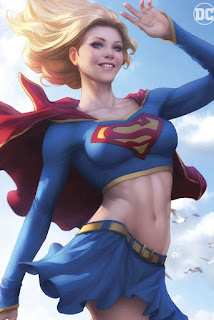 There is a weird, cheesecake poster of Supergirl before the story starts, which is nicely painted but utterly superfluous. It is skillful, but lacking in any intent. My guess is that it was copied, photrealistically from some image in a fashion shoot, and the Supergirl outfit (or a crop top version of it) was added instead of whatever clothes were in the original advert. It's a waste of space. It's not quite Power Girl, but it's not good.

Then the comic proper goes straight into the action, with a battle between Supergirl and a horde of mutated clones, created from her DNA. It is drawn with real motion and weight to the physical combat and the use of the superpowers. We see Supergirl's musculature flex and her face is contorted with effort and scarred and scratched. This is the kind of art that really impresses, as it "sells" the superhero action. The longer combat goes on, the more monstrous and threatening the clones appear. It is a virtuoso performance of comic-book mayhem, which is, of course, the best kind of mayhem.

This action takes place in the Omega Men's secret base, so they are in on the fighting too, which is a nice bonus. I'm not super familiar with the Omega Men, but I liked what I saw of them here.I may even have to seek out a title or two of theirs to read. 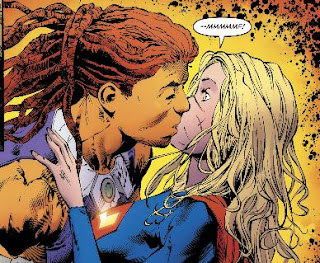 There is other stuff going on in the comic book, apart from a giant fight, but it is very much secondary. There is a a green love interest, who is dog sitting Krypto the Superdog, and Ryand'r (brother of Koriand’r (Starfire)) is being set up as his rival. It's a bit lame, like from a romance book, but luckily this secondary plot is kept short.

Once the clones are dealt with, the bad guy who sent them after Suergirl is next in line for a beating, but he is hard to take seriously, he's a guy called Harry Hokum.Superficially his story is interesting.
He was born on Earth, somehow traveled to the Vega star system, inveigled his way into the upper echelon of the Citadel high command, where his power and influence grew. Across the Vega star system, Harry has supervised the gruesome execution of hundreds. Unfortunately, his pantomime costume and "on the nose name" are a little too much for me. 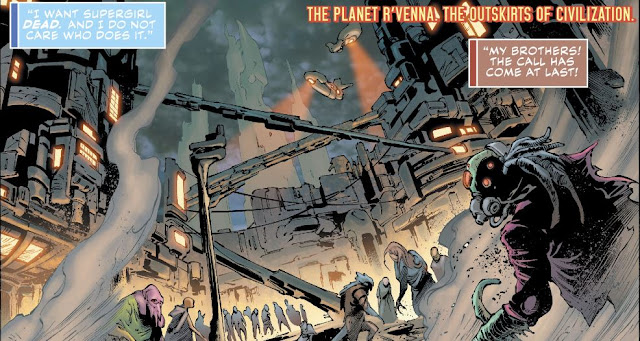 The story ends with a price being put on Supergirl's head. Specifically, the order goes out to R'Venna, Rogol Zaar's planet, to kill her and the entire planet takes notice, which promises action. We are also promised that the secrets behind Krypton's destruction will be revealed. This episode is sci-fi fun, and it looks like there will be more of the same next time. I just hope they decide they can do without cheesecake art to help sell it. Supergirl's adventures should sell just fine on their own, without pinups.

To end, just a reminder that the best way to support this blog is to buy one of my books. Simply go over to Amazon, or Kobo and get one.
Labels: DC Comics Supergirl