Altered Carbon vs The Punisher

Altered Carbon and The Punisher are both shows that have recently premiered on Netflix. I have watched all of The Punisher, but only the first three episodes of Altered Carbon, and I'm writing this post because I noticed a few similarities between the two shows. On the surface, they are quite different. 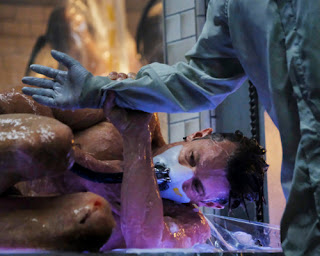 Altered Carbon is a cyberpunk series based on the 2002 novel of the same name by English author Richard K. Morgan. It takes place in the year 2384, a time when people's consciousnesses are contained in "stacks", storage devices embedded within the neck. Physical bodies are considered "sleeves", mere disposable vessels. Takeshi Kovacs (Joel Kinnaman) is given the choice to either spend the rest of his life in prison for his crimes, or help solve the murder of the wealthiest man in the world. He's no detective though, he's a hulking super soldier with chiseled abs. 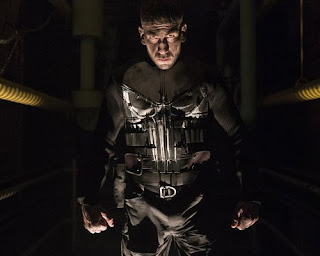 Marvel's The Punisher, is based on the comic book character of the same name. Frank Castle (Jon Bernthal) is The Punisher, who uses lethal force to fight crime as a vigilante. After exacting revenge on those responsible for the death of his family, he uncovers a larger conspiracy that goes to the heart of US government. This superhero does not wear a costume or a cape. He hasn't got any superpowers. He's a tortured, angry father and husband, living in a world of darkness, loss, and torment.

Despite the differences in setting, however, there are a bunch of things that are the same. Both are bone-crunchingly, blood-spatteringly violent, and both stories are told against backdrops that are very much men's worlds. In the parlance of TV Tropes, both are rated M for manly. 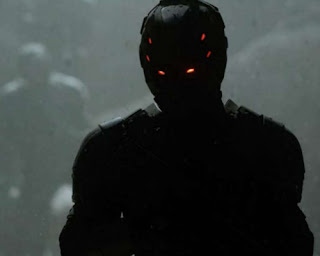 For example, both start with the brutal fridging of the hero's female companion. In The Punisher, this is his wife, while in Altered Carbon it is not obvious what his relationship is with the woman he is with at the start of episode one. I guess it might be explained as the show continues, but I'm not holding my breath.

The term "fridging" was popularized by comic book writer Gail Simone, through her website Women in Refrigerators. Fridging is all too often a hallmark of supremely lazy writing, using the death of a female character as "cheap anger" for the protagonist, and devaluing the life of the female character that is fridged in the process. It is considered better to give the villain something actually interesting to do that can involve all three characters and more emotions than simple anger and angst.


Along with the terrible old trope of fridging, both have ridiculously sadistic goons threatening the hero. In both, the cartoonish sadism and posturing of this enemy allows the hero to beat them. The dialogue growled in these scenes is a low point in both shows. 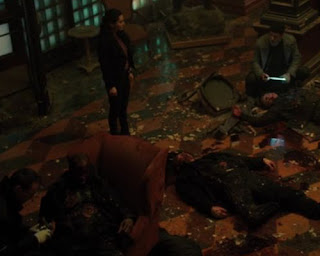 Both shows also include a strong female character, at sea among all the macho BS going on around them. MovieMagpies calls this Token Female Character Syndrome. With just one strong female character, it is impossible for the writers to get her balanced perfectly. She is either too tough, or not tough enough. She's either too emotionless, too smart, or too emotional and not smart enough. She is too affected by her traumatic experiences, or not enough affected by her traumatic experiences. If she has flaws, she's not perfect enough. If she is a flawless character good at everything, she's unrealistic and a Mary-Sue. No matter what she is, she's not right. And this is simply because there's only one of her. In Altered Carbon, she is Detective Kristin Ortega, while in The Punisher she is Dinah Madani. 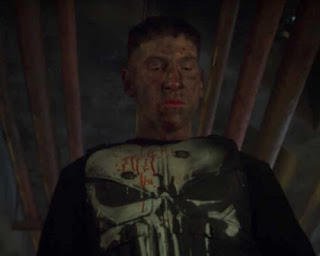 Neither show is perfect... far from it, but there are interesting elements to both shows. The Punisher muses on the fact that torture does not provide useful information. Usually in brutal, macho shows like this, such as 24, the plot is advanced by torture sessions. The hero, Jack Bower, captures some bad guy tortures him, gets a snippet of information and moves on. Not so in the Punisher, the Punisher has to trick the people he captures into betraying information, or he gets his buddy to do some hacking. He never gains anything from torture.

Also, the bad guys in the Punisher are within the US government, abusing their power. Frank even slaps his own son when he makes a racist remark about killing Afghanistan natives. Then he is disappointed in himself for resorting to violence with his own son. 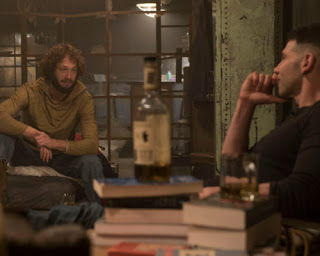 From there, the show goes on to examine PTSD in soldiers returning from war, and then the alt-right preying on returned soldiers. It's surprisingly complex stuff, insightful even. But it is turning this insight onto a tiny area of storytelling within a niche genre. It is examining the superhero packing heat sub-genre within comic book fiction, which is navel-gazing indeed, but it does this well. It is in almost every other area of storytelling and characterization that it is on less sure ground, often falling back on tropes and broad brush strokes.

Altered Carbon also examines some interesting themes, among the action-hero strutting and antics. It examines what it might mean to be able to move a consciousness from one body into another. It does this visually, and the images it presents of the experiences of one "sleeve" bleeding into the perceptions of another are done very well, allowing us to feel the displacement in time and space felt by the main character. It also has some good wisecracks among the dialogue, and they come thick and fast.

Of the two, I think it is Altered Carbon that may appeal to a wider audience. The questions it examines, about what it means to be human and what our relationship is to our body are much more universal than those in The Punisher. Despite its many flaws, I think The Punisher is the better, less lurid series, but I suspect Altered Carbon will find more fans. They are both lacking in many ways, especially in the treatment of women. I wish they were both better but despite all my reservations, I enjoy watching them both.