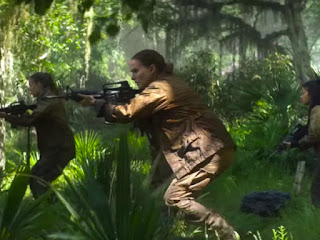 As usual when talking about a movie I really enjoyed, this review has ended up getting a little spoilery. I don’t think I’ve given much more away than can be guessed from the trailer, but if you don’t want to be spoiled at all and only want to know if this movie is worth watching, rest assured that it is and you should be hitting play or going to the screening right now.

The movie starts jarringly with a very non-glamorous-looking Natalie Portman being debriefed in a very ugly room in a modern building, then shifts back in time, to show her looking more groomed and confident, in a very beautiful modernist building on a pretty-looking campus. She is a lecturer and she is telling a class about life, and the exponential, transformative power of dividing cells. We see a close up image, as if filmed through a microscope, of cells dividing.

Then we go to a small wooden house, where there are scenes of domestic bliss, interspersed with images of Portman’s character coping with loss. Her husband is no longer around, gone MIA on some military mission. She then symbolically moves on by painting a room, only to have a member of her husband’s unit intrude on these scenes. As you can see from this short summary of the first few minutes of the movie, a lot of this story is going to be told in images.


We, as viewers, know that Portman is heading for an area of spatial anomaly. Even a cursory glance at any of the promotional stuff will tell you that, but I think there may be even more going on here. The man that visits her tells her that he escaped because he was outside the room, and that he saw her inside, hinting that the area she is going to explore may turn out to be a temporal anomaly as well. Just ten minutes in, I was very intrigued by this movie.

And then we jump in time again, but this time just a small jump, but all the more disorientating for that. The movie now really starts to focus on Portman’s character’s husband, the absence in this movie. She is talking to a psychologist, while an armed guard looks on, the questions are searching, and it is here that the revelations really start. We are treated to a great setup for a movie, with a lot explained, but also leaving so much unsaid, and I wish more movies trusted the audience to work things out as the story unfolds, the way this one does.

At last we see the anomaly, a shimmer among the trees, and it looks great. It refracts light the way motor oil slicked over the surface of a puddle does. And this isn’t the only distortion, a lot of the dialogue is delivered in ominous whispers, spoken in rooms with terrible acoustics, and the effect, coupled with the stark visuals is great. It’s called the Shimmer, by the way.

We jump in time again, a jump into the past, to find Portman’s character in bed with her husband, having one of those deep conversations about God, specifically whether God ever makes mistakes. The husband is about to go on his mission into the Shimmer, which he can’t tell her about, but he says that if they look at the sky, they will see the same stars. This immediately makes me wonder if the sky indeed will be the same within the Shimmer.

The movie does a lot of foreshadowing and I love that about it. It is only after twenty minutes of run time that we are introduced to the team, all female, that will be exploring the anomaly. They are all great actresses, which helps with this slow, talky, film. At this initial meet and greet Portman’s character comments on the fact that they are all women, but nobody really bothers to explain. It’s just not a particularly big deal compared to the Shimmer, and I certainly never wondered about the choice of team for a second. They are dedicated and smart, exactly the kind of people you want investigating strange phenomena.

There is a lighthouse at the center of the shimmer, which we see in the very first few frames of the movie, and the official goal of the mission is to reach it. The repeated mention of this objective made me think of [To the Lighthouse, by Virginia Wolf](https://en.wikipedia.org/wiki/To_the_Lighthouse). Wolf’s book is not a sci-fi novel, but it is a book about loss, subjectivity, and the problem of perception. It can’t be a coincidence that it is alluded to so directly.

I was surprised by the fact that Portman’s character is not initially slated to go on the mission, but instead asks to tag along. It makes sense for her character, though, and you can see why the others agree to have her join them. She is ex-miliray, and handy with an assault rifle. Then there are a couple of jumps in time, and the mission has already started, with the team seen striding across damp grassland, toward the rainbow wall of the Shimmer.

Then we jump in time again, to a scene from the past that turns out to be a dream. Portman’s character wakes up in a tent afterwards to find that a couple of days have passed since the team entered the Shimmer. As a movie viewer you get used to a movie jumping forward through time, especially this one, but it turns out this latest jump is being experienced by the characters on screen, too. They have no memory of what happened between entering the Shimmer and waking in the camp. They only know time has passed because they inventory their rations and find some has been eaten. It is a very clever moment, a comment on filmmaking and its conventions, and how unlike reality they are.

The team aren’t too phased though, and they continue exploring, finding out about the landscape within the Shimmer as they also find out about each other. It is a little like an episode of The Walking Dead, what with all the wandering around in deserted buildings and dense forest. Instead of Zombies, however, we have mutated animals, but the jump scares are just as effective, if not more so.

Compounding the turn towards horror that the movie takes after the Shimmer is breached, we get some – literally – found footage elements. The team find video taken by the previous expedition, and on the tape is some pretty extreme body horror, involving a knife-wielding soldier, a grinning loon, who turns to face the camera to reveal that he is Natalie Portman’s husband. And this is just the first found footage tape the group come across. The device never gets old and each tape is a jarring rush that takes the story in another direction.

As the horror continues, there are jump scares and there is death, and Portman’s character ends up alone. She reaches the coast, and she sees the lighthouse in the distance, as the landscape becomes ever more alien. I won’t tell whether she reaches it, but having it as a goal gives the movie a heart and a focus it would otherwise lack.

The ending keeps twisting and turning, and we are suddenly confronted by the fact, known to us all along, that the images we have seen have all been shown to us from the point of view of the only survivor, and we are forced to ask ourselves how much we can rely on her memories. The foreshadowing at the start of the movie comes back as strong as an echo of a shouted warning. The movie tells us we should have known where this was heading, all along, but I doubt many will predict exactly where the journey will end.

Make sure you see this movie, whatever flavor of sci-fi you are into. It should only be avoided by the real lily-livers out there who can’t take any horror elements in their movies at all. I think his movie is destined to be a cult classic, and you owe it to yourself to drink in its perfectly judged moments and beautiful but disturbing visuals.

To end, just a reminder that the best way to support this blog is to buy one of my books. Simply go over to Amazon, or Kobo and get one.
Labels: review sci-fi movie