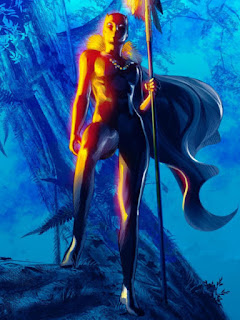 Black Panther premiered in Los Angeles on January 29, 2018, and was released theatrically in the United States on February 16, 2018. That is almost a month ago now, but there is still palpable buzz about the movie in the air, and across the Internet. This is well deserved, of course, and I am very much among the people who absolutely loved the movie. It has also been a big financial success, as of a couple of days ago, Black Panther had grossed 940.4 million dollars worldwide, being the fastest Marvel film to reach the 50 million mark along the way.

One of the areas it has been deservedly praised for is the role of women, both in front of, and behind the camera. Popsugar has details about Black Panther’s feminist strengths, which are formidable.


Ramonda, Okoye, and Nakia all complement Black Panther as king, warrior, and man, but they also have agency, and motivations, and they are fun to spend time with on screen. They are partners, not plot points or props. No women get fridged in this movie, except maybe Kilmonger’s girlfriend. But even this is not exactly a fridging, her interesting character is sacrificed to underline how ruthless Kilmonger is. Even so, somehow, despite how this movie goes far further than any other Marvel movie in terms of portraying women positively and giving them screen time, I still felt suspicious of it. This is not the general mood, of course. Most people were wowed by the feminism on display in Black Panther.

A cursory Google search connecting Black Panther and Feminism brings up pages of results linking to articles singing the movie’s praise and proclaiming its feminist credentials. On the first page of Google results alone, Slate trumpets Black Panther’s feminist credentials by saying that there are three fully realized women, none exactly alike, and the film provides ample evidence of mutual respect between them and their countrymen. The Washington Post says that the women of Wakanda are savvy warriors, conscious of their power and able to use it. Shoshana Kessock even goes as far as to say about Black Panther that it is a more feminist film than Wonder Woman.

There are very few voices, in such an environment, who dare say that it does not go quite far enough... but there are some. For example, way down at the end of a review of the movie that I found at the bottom of page two of the Google search I did, I found Sharanya Gopinathan on First Post], who asks: Is it a false criticism, though, to watch a movie named Black Panther that was supposed to be the revolution, and wonder why a woman was not heading it? Is it too much to ask for a revolutionary movie’s highlight fight to include a woman instead of two brothers (*yawn*), for women to occupy roles outside of guards, Queen Mothers and spy-cum-love-interests?

It’s a weird place to be, as a brown woman who appreciated Black Panther’s racial politics. Black Panther does have more women in casually powerful and influential roles than most movies, and certainly most superhero movies, but this was supposed to be the revolution. We were supposed to burn it all to the ground and start afresh, to create a blueprint for a new kind of perfect. Black Panther comes tantalizingly close on many fronts but I think I will not be happy until I see a Black woman headlining a superhero movie that does not have the word ‘Black’ in its title.

After a lot more Internet searching, I also found Lena Potts, on Medium, who writes: In a movie about a fake African country, with a fake metal that has lead to wild technological advancements, where the ruler is also a superhero who teams up with an international group of superheroes, one of whom is from another planet, why, other than the source material that began 50 years ago, did Wakanda have to be a patriarchy?

This was my first reaction too, and I still can’t shake it. The women in Black Panther were badass, of course but Black Women are very often portrayed as badass. That, in itself, isn’t necessarily feminist in the slightest. There are a lot of distasteful stereotypes with long histories in motion pictures, and one of the worst of them is the sassy black woman. The sassy black woman dates back to the heroines of blaxploitation movies, like Coffy and Foxy Brown (both played by Pam Grier), and it is a stereotype that has been popular ever since. This stereotype is now more common in a more positive form, where her "sass" becomes more like "exasperated sarcasm". This way of writing black female characters can be seen as stereotypical and lazy writing. I want to see minority characters given the same nuanced characterization as anyone else. Just making the black women in a movie tough does not mean the movie is creating really progressive roles for them. The women in a movie need more than just being included in fight scenes, then need to be among the characters deciding how things are going to go down, they need to be given control.

People talk about the gender equality in Black Panther, but this does not extend to control of what is going to happen to Wakanda. In fact, the only way a woman can ascend to the decision making table is by being in charge of a squad of warrior women, or be born into one of the country’s royal families. Even then though, all they are asked for is advice and support. They are not given a say in what is to happen. The female characters are powerful and empowered women, and yet they’re all still supporting characters, and they are all in subservient roles. The women are arguably the most capable people in the movie, but none of them will be allowed to rule Wakanda. The previous rulers the new king meets on the astral plane when he ascends to the throne are all kings, all men.

There is a solution however, and that is Shuri. Hopefully, in the sequel, Shuri will be the one to break this mold. There is a third Black Panther suit in her lab, and it is undoubtedly hers. Hopefully she will ascend to the throne of Wakanda, and drag its patriarchal society out of the dark ages, so that the women there can be more than badasses, they can be equals.