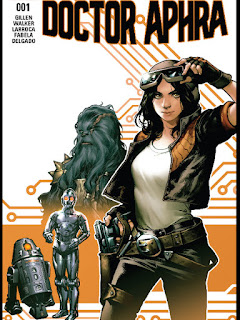 I’ve just started reading Doctor Aphra, and like most things I’m late to the party. Doctor Aphra first appeared in the third issue of the Darth Vader comic book.

I have been aware of the Darth Vader book and Doctor Aphra for a while, but although I was intrigued I didn’t immediately check it out. One reason I haven’t checked out the Star Wars comic books, including Darth Vader, is that we live in a golden age of sci-fi, where spaceships and superheroes are welcomed into the mainstream like never before. That means there is just so much to watch and read that you have to be choosy, maybe sometimes too choosy.

I am also now writing sci-fi myself, novels not comic books, which drastically cuts into the time I used to be able to dedicate to consuming what other people write. I used to read a lot more novels and comic books than I do now. See the bottom of this post for a plug for one of my more popular books.

But, if I’m honest, the main reason I haven’t read any of these new Star wars comic books is that I don’t usually like this type of work. I’m not usually a fan of comic books that feature characters from movies or TV shows, not even Star Wars. It’s not that I think they are bad, it’s just a personal quirk. It applies equally to Star Wars, Dr. Who, and Battlestar Galactica, or any of the other mega-sci-fi behemoths that have spawned industries creating secondary content.

I decided to put this weird prejudice of mine aside when I was scrolling through a list of sci-fi comics. I love all types of comics but sci-fi is my favorite. Doctor Aphra was mentioned and I remembered hearing good things about it, so I decided, at last, to check it out.


And issue one gets off to a great start, with a page given over to a yellow text crawl against a backdrop of stars, just like that first time with Episode IV at the movies, when I was a kid. It’s an obvious move for a Star wars comic, but it made me smile. 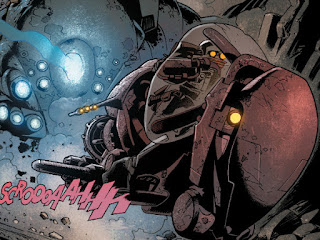 Diving into the comic, the art is atmospheric and nicely drawn. The technology the artist, Kev Walker, draws in particular is great. Walker began his career in the late 80s working in good-old 2000 AD, on popular long-running stories including Judge Dredd, Rogue Trooper, and the ABC Warriors. He is known for both his glossy, painted style with fine detail, and also a high contrast black line style with heavy shadows coupled with flat computer coloring, reminiscent of the work of Mike Mignola. For Marvel, Walker has worked on the Marvel Zombies series and on Thunderbolts.

His work here is done in his tight and detailed style, and it looks appropriately Star Wars. The art is a definite high point of the issues of Doctor Aphra I have been reading.

There are some things, however, that don’t work quite so well, such as the evil versions of C3PO and R2 that are featured in the comic. The coincidental combination of these two types of droids repeating, except this time they are evil, is a bit hard to credit in a big Galaxy like the one Star Wars is set in.

Despite these few things, the writing in general is great. In the second issue there is an interesting discussion where we see archaeological evidence used to interpret past events two different ways, one time with the Jedi as the bad guys and one time with the Jedi as the good guys. It shows how much history is a matter of interpretation, and the two stories are well visualized and differentiated by the art, too.

The transition from issue two to issue three then takes us to the rebel base on Yavin, the planet from the end of the original Star Wars movie. I recognized it instantly, and it is a great place for an archaeologist to come looking for artifacts.

The only problem for Doctor Aphra and her gang is that there are a bunch of Imperial troops there clearing up the rebel base. Including those scout guys, on speeder bikes from Endor. The inside of the rebel base is beautifully drawn. There is one panel, for example, with a Death Star droid that is cataloging a Y-Wing that is hanging from the roof in some chains that just looks gorgeous.

There was then some silliness with the evil wookiee - did I mention there was an evil wookiee to go with the evil R2 and 3PO? The evil wookiee takes out a whole squad of Imperials, and this is the sort of badassery that I can do without. I can imagine how that sort of indulgent stuff might be popular with Star Wars fans, but come on, he’s one wookiee with one bowcaster, that’s all. He shouldn’t be able to make mincemeat out of a whole squad.

There are also lots of jokes about the evil version of R2-D2 and C3-P0 liking to torture people. That’s a little unsettling, coming from characters we’re supposed to be rooting for. It makes sense, I guess, because they’re evil, but still.

Later in the comic, they put some gems in the floor of the temple, and weird sun lasers shoot up out of the roofs, or come down to hit the roofs, it’s hard to tell which, and some Imperials turn up to chase them.

The art of Doctor Aphra is uniformly great across the issues I have read, as I said, and that extends to the character designs that are not simple copies of stuff from the movies. I particularly like one of the skinny, tall officers on Yavin. She has gray hair and her neck is encased in some kind of robot prosthesis. She makes an impressive looking baddie.

The panel we see of her lit from below as she chases Dr Aphra to a half destroyed moon is very atmospheric. She is written well, too. For example, she tells herself off for using the poetic word absolution; her austere attitude underlining her austere appearance.

Eventually, the evil wookiee, evil C3-P0 and evil R2 leave Doctor Aphra, and the story is better for it. It suddenly feels like she is in jeopardy. With the three unstoppable badasses around, all the tension was sucked out of the story. Yes, that’s right a version of C3-P0 as an unstoppable badass.  But without them, and with squads of snow troopers, the tension starts to ratchet up. I’m hoping Dr. Aphra has been abandoned by the other three for good, but somehow I doubt it.

The story is exciting and the complexity of some of the drawing is amazing, but I’m having trouble committing to the book. There are just too many torture jokes, and too many times when C3-P0 or even R2-D2 take out fearsome opponents for me to truly suspend disbelief and get into this one.