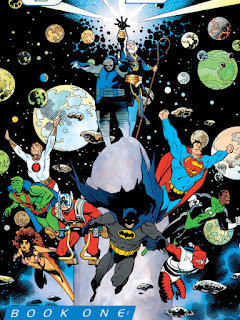 I just discovered an old comic book a couple of days ago featuring Kirby’s New Gods characters, which is great in itself, but what was even better is that it is drawn by Mike Mignola.

The comic is called Cosmic Odyssey and is a mini-series, first published in 1988 by DC Comics. The story spans the DC Universe, involving a wide variety of major characters including Superman and Batman, along with the New Gods. The story is told over four 48-page prestige format comic books, all drawn by Mignola.

Mignola is famous for creating the Mignola-verse for Dark Horse Comics, a collection of titles including Hellboy, B.P.R.D. and Abe Sapien, among others, and The New Gods are a great fit for his dark style. The New Gods are just as off the wall as Mignola’s own creations, if not more so.


The New Gods stories include science fiction and fantasy elements, and they’re proudly strange and unusual. These “gods” came into existence via the destruction of Ragnarok, which produced two new planets, forever linked, but utterly different. One is called New Genesis and the other is Apokolips. New Genesis is a lush green paradise, while Apokolips is a scorched, nightmarish land marked by massive fire pits. 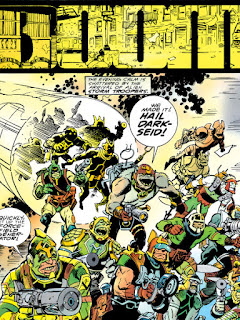 The New Gods travel using boom tubes, which are a cross between a wormhole and a teleporter. There are two rulers of the New Gods, Highfather, a benevolent and wise leader who promotes tolerance and justice. The other ruler is Darkseid, who seeks to conquer the universe and pummel worlds into submission until they serve his every whim.

Mike Mignola is a super talented giant of the comic-book art world, and any comic benefits from having his art. This foray into New Gods territory comes from a long time ago, from 1988, and Mignola’s style back then was recognizably different from his later work. It is still very beautiful, but it is different. His work has become ever more stylized, and this early work still follows more of the usual conventions of comic book art. The drawings are also colored by someone else, and so do not always have the sombre colors that compliment Mignola’s work so well. 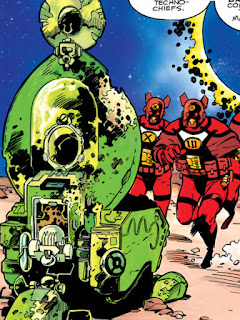 In taking on the New Gods, Mignola has remained absolutely true to the designs of the characters originally created by Kirby. The technology he draws is also very Kirbyesque. They still have hints of Mignola however, for example in the decayed version of the Mobius Chair he presents here. 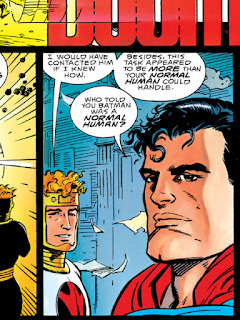 Superman makes an appearance early in the book and Mignola’s rendering of such a clean-cut character is one of the weaker areas of the art. The Darkseid he draws, however, is very Mignola. If this were a movie, instead of a comic book, this iconic role is being played by the Brando of Apocalypse Now. He’s all belly, hiding in the shadows. 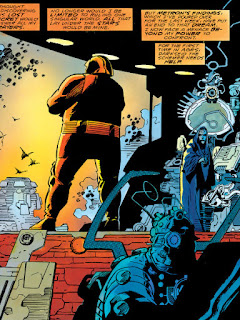 Some of the scenes on Darkseid’s home planet are such an amazing mixture of Kirby and Mignola that it makes my heart leap. This comic book is a gem that I didn’t even suspect it existed. It is not perfect though, and in some panels it is very obvious that Mignola’s skills were still developing. Some of his panels look perfunctory, but even when Mignola is phoning it in, he is still one of the greats. There is also Starfire. She doesn’t strike swimsuit model poses in this story, which is something to be grateful for, but she does have the sort of costume that would have to be taped to stay in place. The male heroes are dressed colorfully, to be sure, but their outfits are more-or-less sensible work clothes compared to Starfire’s collection of strings and ribbons. 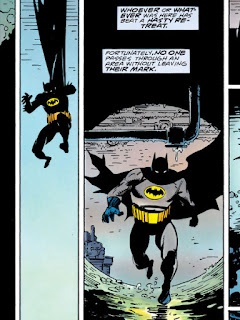 Batman is roped into the story right at the start, and the action swiftly moves beneath the streets of Gotham City, and this is an environment Mignola is much more comfortable in. His art immediately improves, and we start to see foreshadowing of the amazing work Mignola will later go on to produce. The colors are jarring sometimes, but the drawing always shines through, even when the colors are an attractive rainbow of bright primaries. 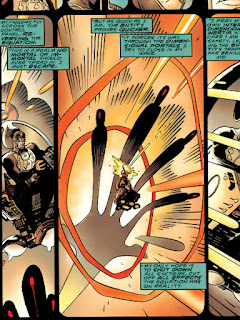 There is a sequence when Earth’s heroes are given a lecture on some galactic history, and the panels of this section are all in a dark bronze. With a limited range of dim colors, this looks a lot more like the work of the Mignola of today. Metron traveling to encounter the anti-life force is also drawn this way and is particularly effective. 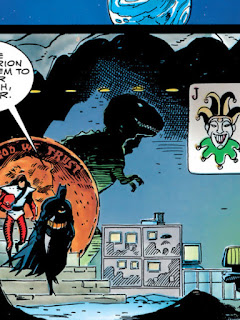 In the second issue of the story Batman goes into his bat cave with a guy called Forager. It’s great to see this iconic place drawn by Mignola, but Mignola’s attention seems to be elsewhere. Mignola seems to be more engaged when we get to a scene featuring Etrigan the Demon. The Demon is old and enfeebled, and the close up of Etrigan’s aged face is truly ghastly. 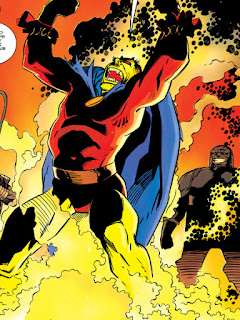 Then a man called Blood, a human bonded to Etrigan but who had thought he had escaped it, is persuaded once again to unite with the demon – and the creature is reinvigorated. It makes a great, very Mignola, full-page image. Darkseid in the background of the image, grinning like a loon, his teeth bright in the reflected flame and brimstone is particularly nicely drawn. 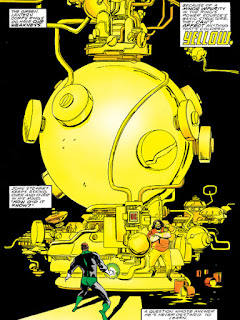 There are a number of planet-busting bombs throughout the story, all with the same design.  Mignola’s design for these bombs is a seamless mix of Kirby and his own massive imaginings. There is a strange panel that makes fun of the Green Lantern’s power ring being unable to effect something painted yellow. It is very strange, with yellow paint tins and a guy with a beard and a brush, but the design of the technology is beautiful.

This bombs gets set off and a planet is destroyed, which is a strange choice for the story, but Mignola is equal to the task of following this destruction from panel to panel, and selling it with his line work. 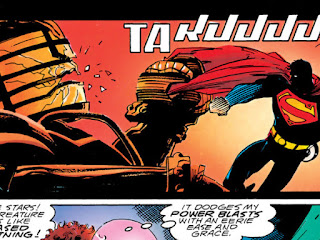 We even get a pretty big robot - not a giant one but pretty big - designed by Mignola, with a heavy debt to Kirby’s Eternals. It is a thing of beauty and it even makes Superman flinch. 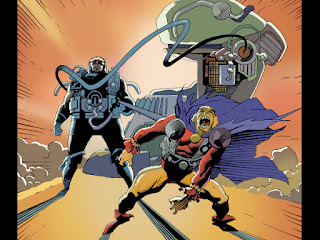 Another powerful image, and strange, is Etrigan joined to Darkseid by some arcane device. The demon adds to the strangeness by speaking in rhyme. I could pick out wonderful panels from this book all day, but I will force myself to stop. I’ll just select one more that I like. 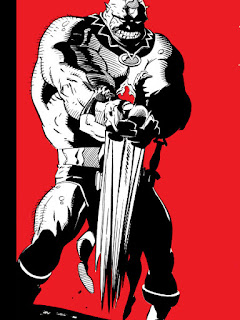 This is an image of one of Darkseid’s monsters choking Batman. It is grim and macabre, but beautifully drawn by Mignola, to produce a classic image. This miniseries is not perfect, and Mignola’s art varies in quality, but for fans of the master it is well worth getting hold of.

To end, just a reminder that the best way to support this blog is to buy one of my books. Simply go over to Amazon, or Kobo and get one.
Labels: DC Comics