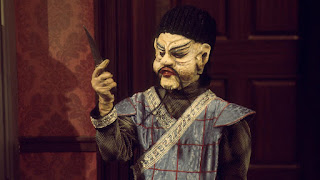 I talk about lots of vintage sci-fi on this blog, and that entails a lot of problematic stuff. Such shows as Doctor Who and Blake's 7, and such comic books as 2000 AD, have a lot of good in them, but they can also be hella' problematic. It can get so bad that, after watching something virulently racist, like The Talons of Weng Chiang story in Doctor Who, that I just want to stop exposing myself to this kind of material at all.

But, on the other hand, these old shows and comic bring me great joy. It is something I really struggle with, and I am not the only one. The author of this article at Tor, for example, has trouble with the fact that T.H. White’s legendary classic, The Once and Future King, is just so problematic. He loved it as a boy but it includes ugly sentiments about Native Americans and also the n-word. He also notes that Tolkien’s world too, is racist, just as is the work of C.S. Lewis’s, with its Calormenes, and it is best not even to get started on the work of H.P. Lovecraft. Even Roald Dahl was a self-avowed anti-Semite, who included little black Pygmies who gladly enslave themselves in exchange for chocolate in Charlie and the Chocolate Factory, and thought Mexicans were cannibals. The article is good at identifying the problem, but - like me - struggles to come up with a convincing solution.


The way of dealing with this stuff that the article in Tor talks about is realizing when you come to a tipping point of not being able to look past a work's problems, a point where we can no longer enjoy reading a particular book, or watching a certain show. When we reach this point, the book or show, or whatever, should be shunned and set aside. For reprehensible schlock like the Game of Thrones books, I can understand this approach but I am hoping that there must be some way to keep less bad stuff, such things as Doctor Who, in my life, while still knowing about all the bad stuff that lurks in the show... here and there... from time to time.

Luckily, another article gave me hope and helped me feel better about enjoying the good stuff among the turds in problematic literature, and it cited even more examples, such as: TS Eliot's antisemitism, and Piers Anthony’s Xanth series. His take is that liking problematic things doesn’t [necessarily] make you a bad person. His advice therefore, is to own your likings but learn what the problem is. He tells about recently being made aware of how John Buchan’s WWI thriller Greenmantle has really (weird-ass) homophobia and Orientalism. He still likes the book and believes his awareness of the context gives him a deeper understanding of it.

I'm not sure I entirely buy this attitude. It is less extreme than cutting all problematic books and shows out of your life, which I like, but it just seems al little too easy to me. I just can't imagine that all I have to do is make a few sophisticated arguments, and then carry on enjoying mountains of 1970s British comic books with all the old-fashioned, sexism and racism they contain. It just feels like I'm letting myself off the hook.

In the end, for the definitive opinion on the subject, I went to the wise heads at The Mary Sue. The author of the article I found - Clare McBride (contributing editor at the Hugo Award-winning Lady Business and SYFY Fangrrls. Find her at Twitter @omnivoreal) - calls this kind of stuff, problematic faves, and says they are something you have to recommend with a caveat, such as noting that Lovecraft is a big ol’ racist when recommending At the Mountains of Madness.

She understands the phenomenon through the prism of affect theory. She explains that there are objects that make us happy. (They affect us, hence the name of the theory.) When people organize themselves around those objects, they create “affective communities”—or, fandoms. Fandoms recognize a piece of media as good or enjoyable. So when someone comes along and points out its flaws - an affect alien - fandom members can feel threatened. An example of this is the “feminist killjoy”. Here comes someone, the feminist killjoy, who is unable to find happiness in your happy object, and they have unassailable reasons like, say, “this story says terrible things about women.” But McBride points out that “affect aliens” aren’t aliens at all, but other members of the fandom that others have had the privilege of being able to ignore in the past.

Based on this, the way to deal with problematic faves that she recommends is to be able to step back and have a nuanced conversation about its pros and cons. She found empowerment in the queer characters on Gotham, she says, but is also very upfront about how awful that show (and, to be honest, the entire Batman universe) is about mental illness.

That makes sense to me. I have to understand that my problematic faves are a mix of good and bad. Just to take one example, the comic book I love above all others, 2000 AD, has taught me interesting things about politics and economics, while at the same time failing the Bechdel test on a regular basis, and being occasionally - over the years - choc full of racism, homophobia, sexism... the list is endless.

I feel I can continue to read 2000 AD, and to review issues on this site, just so long as I remember to be up front about the publications many flaws, just as much as I write about all the wonderful aspects that keep me coming back to it, and the same goes for Blake's 7, and Doctor Who, although maybe not The Talons of Weng Chiang.

To end, just a reminder that the best way to support this blog is to buy one of my books. Simply go over to Amazon, or Kobo and get one.
Labels: 2000 AD Doctor Who