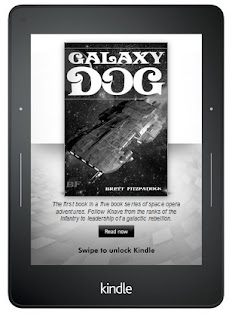 My ebook sales are strong at the moment – not Dan Brown strong, but strong. I’m selling a pleasing number of books on Kobo, Smashwords, Apple Books, Barnes & Noble, pretty much everywhere ebooks are sold, except one place. Unfortunately the one sales channel where my ebooks are not moving is the market leader, the big cheese, the top dog, Amazon.

I don’t know why the Amazon algorithm has taken against me, but there is no doubt that it has. This month, I have two sales in total on amazon, across the more than ten ebooks that I have published. Obviously, this situation cannot be allowed to continue. I have to do something to breathe life into my Amazon sales, so that they come up to the same level as Kobo, for example, or even exceed them.

I’m not entirely sure how I am going to achieve this, but I do have an idea. My plan is to use Amazon ads to generate sales and attract the attention of the Amazon algorithm. The Amazon page about this option is very encouraging, and makes the process sound quite simple. It says: Running ads for your KDP books can help you reach new customers. With Amazon Advertising, you can create custom ads for readers likely to be interested in books like yours. You set the budget you want to spend and the maximum amount you're willing to pay when a customer clicks your ad. You're only charged when your ad is clicked.

The first choice to make is which book I want to promote. I have decided that it should be my biggest book, the novel that is the start of my Dark Galaxy sci-fi series, Galaxy Dog.

This is a series of sci-fi novels called Dark Galaxy, which starts with the book named Galaxy Dog:


After choosing the book, I clicked the big yellow “Create an ad campaign” button. Next I had to choose an ad type. The two options were Sponsored Products and Lockscreen Ads. Sponsored works for both eBooks and paperbacks, while only eBooks are supported for Lockscreen Ads.

Sponsored Products promote individual titles to readers as they search for books, and work via keywords. They appear within search results and on product detail pages across desktop and mobile. Sponsored Products is Amazon’s recommended way to get started advertising.

Despite Amazon’s recommendation, Lockscreen ads sound more interesting to me. I balked a little at the minimum lifetime budget, which is 100 dollars, but I steeled my loins and continued. I set the duration for six months, and clicked the button to spread the campaign evenly over those six months. I figure that means that even if my campaign is super-successful, I shouldn’t be paying more than about 20 dollars per month. 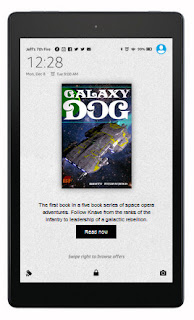 Next I had to choose the bid per click, but there is no advice on what level to set this at. I did some research, and found that a relevant book might appear even if the bid is low, so decided to start low and build up. I set my bid at five cents per click. I imagine I can always increase that later.

I hit submit, but was told: Your campaign is pending approval from our moderation team. Moderation may take up to 72 hours and we will notify you when it has been approved.

It’s a bit of an anticlimax, but at least I am taking some steps to try and revive my Amazon sales.

To end, just a reminder that the best way to support this blog is to buy one of my books. Simply go over to Amazon, or Kobo and get one.
Labels: Amazon self-publishing