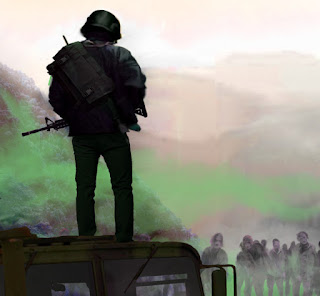 I didn't want to go down this road. I wanted to write a zombie novel, but I wanted to take what I was doing seriously. In fact I'm about to make a bold claim and say that Death Sense is an intellectual zombie book, the thinking person's zombie novel, if you will. To substantiate this claim, I will direct you to the usual tropes of zombie fiction, which are handily summarized on the tvtropes.org site. I will then point out how how my book avoids these dumb tropes, or at least most of them, definitely some of them.

There are an awful lot of tropes on the page, some bad, some good, but a lot of them can be applied to almost any work of science fiction. Some of the most egregious, and the ones most often associated with zombie fiction come in the following paragraphs.

Due to the threat that zombies pose (they did just become the apocalypse, after all), protagonists of more serious works are required to become very smart very quickly (but will be ignorant with regard to the word "zombie" itself). Failure is often the only option in these stories; rarely do they have an ending that could be considered "happy" by typical standards, or indeed one where humanity survives as a species...

Another common staple of the Zombie Apocalypse is that the zombies are often not the most dangerous enemy that a survivor will face. It's usually other survivors, power-hungry maniacs or regular-hungry people who want to attack you to get at your food and shelter. Expect a subtext about how Humans Are the Real Monsters...

There are three tropes here that I wanted to make sure weren't in my book. The first is ignorance of the word zombie. My characters use other words, such as infected or arisen, but they also freely use the word zombie.

The second trope mentioned on the page is the rarity of a happy ending. I won't give away exactly how Death Sense ends, but I can say it is a nice ending that could grace the end of any Hollywood blockbuster.

The third trope mentioned is that humans are the real monsters. This is very common in zombie fiction, with Mad Max type crazies causing more trouble than the zombies themselves. This is not so in my book. I believe people band together in times of crisis and become altruistic. There are some bad people in the book, but they are not psychopathic cult leaders or anything strange like that.

Another trope, strangely missing from the zombie fiction page, but which sadly does also rear its ugly head in zombie horror is the Black Dude Dies First trope, and that is one, it should be no surprise to anyone who has read any of my other books, that I will have no truck with. 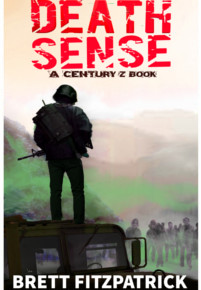 I hope I have gone some way to proving that my zombie novel is not just another exploitative and dumb entry into the genre, and so all that remains to do is to go to the retailer of your choice and pick up a copy.You can find Death Sense on Amazon, Kobo, or Smashwords.
Labels: Self-Published Zombies