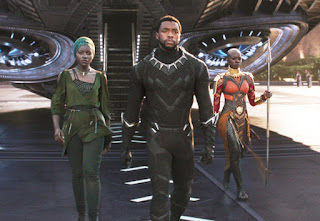 I'm writing today about Afrofuturism, and one big caveat I feel compelled to mention before writing another word on this subject is that I am white. I consider myself woke, but I would never claim to be any kind of expert on a subject like this. I'm not saying a white dude can't, theoretically, become expert in this field, I'm just saying that I am most definitely not that guy. I'm interested, and enjoy works from this genre, as I enjoy works from most sci-fi sub-genres, but what I'm writing here are musings at the very most. Okay, now that's out of the way, let the mansplaining continue.

To take a very recent example, Black Panther and his technologically advanced homeland are what Afrofuturism is all about. It's about a vision of the future, informed by a black sensibility. The movie's depiction of Wakanda, the hidden fictional African nation without a colonial past, is close to an Afrofuturist paradise. Even the characters round Black Panther are infused with Afrofuturism. For example, the all-female military unit the Dora Milaje, who are armed with swords and jetpacks. They are dedicated to resistance and freedom from patriarchy. 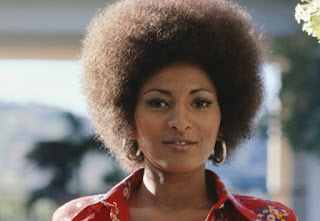 I was intrigued to see that both Misty Knight and Moon Girl are both included on that list as examples of the genre. I haven't read any comics with either of them in for a while, so I have quickly dipped back in, specially for this post. I started with Misty Knight, because she is a character that kicks ass. If ever there was a character that Pam Grier should have played, then it is Misty. Misty Knight is a cyborg with a bionic arm that gives her superhuman strength, and near-perfect aim with firearms. It's Afrofuturism with a hint of Blacksploitation cinema. 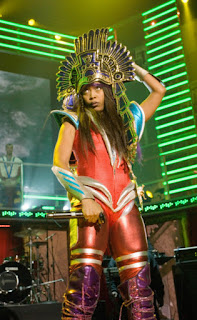 Moving on from comic books, the idea of the cyborg is to be found across genres. It also chimes with the work of musical artists such as Erykah Badu and Janelle Monae. Erykah Badu has Afrofuturism at the core of her songs, seen in Didn't Cha Know walking on an alien planet, putting on her space gear as she sings about being lost and trying to find her way. 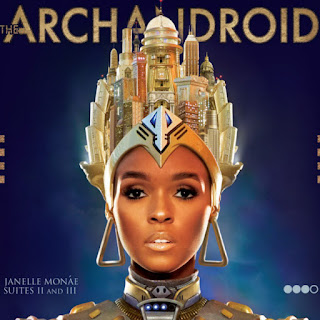 Monae has an alter-ego named Cindi Mayweather, a cyborg in a dystopian future who represents the new other. Monae had a dream about Cindi Mayweather after watching Fritz Lang's Metropolis. Her love for science-fiction inspired her to continue to expand on the Cindi Mayweather universe with her debut album Archandroid and her The Electric Lady. With no past, as a cyborg who was created artificially, Cindi Mayweather calls into question ideas of identity as image, where our identity is a collage of cultural scraps. Identity becomes cyborg-like - nomadic, a hybrid.

Enthusiastic about Misty Knight, with these complex ideas about the cyborg in mind, I plumped for a comic from 2006 called Daughters of the Dragon. In this comic Misty is in a buddy team with Colleen Wing, the hands-down best character in the underrated Iron Fist TV show.

A comic with Misty Knight and Coleen Wing has to be a winner, I thought, with a smile of anticipation. It combines two ultimate badasses in one comic book mini-series. How wrong I was. It didn't take long before I started to realize that the art is an insult to the eyes. The comic book features images that are the male gaze taken to the extreme and beyond, Male Gaze 2.0. We see jiggling flesh in bullet time, and the two female leads are constantly straddling things, spreading their legs wide and grinding against stuff. It's as repulsive as it is dumb, both exploitative and stupid at the same time.

The art was a real smack in the face, a massive disappointment, so bad in fact that it prevented me engaging with the story at all. These two characters have so much potential that this comic book series is verging on being a crime. Both superheros absolutely deserve better, and should not be wasted and debased by being used in this kind of grim, slapdash, and questionable work. 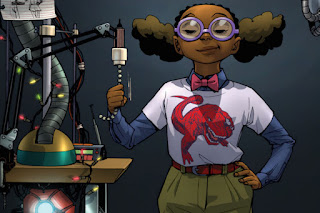 I felt dirty after reading it, and it certainly didn't chime with anything I think of as Afrofuturism, so I then turned to Moon Girl and Devil Dinosaur, which was also on the list in the article. I was surprised to see that Devil Dinosaur isn't in the comic any more, and instead it seems to be reintroducing the Fantastic Four. Reed and Sue Richards are still missing, the Fantastic Four are no more, but the writer has promised a new team with all four of their power sets.

I was a little dubious, but it works amazingly well. Seeing the Thing and the Silver Surfer fighting for the attention of a young mutant genius in the shape of Lunella Lafayette in the school yard, surrounded by a chain link fence and grim brick apartment blocks, strikes me as something that fits very well with Afrofuturism.

This situation is set in motion when Ben Grim and the Human Torch, trying to come to terms with no longer having Reed Richards around, decide to clear out the Baxter Building. Both Moon Girl and Ben Grim grew up on the same Lower East Side block, albeit a generation apart, so he brings all the high-tech stuff to Moon Girl, and there is a logic to that.

If she is taking the role of Reed Richards, it also makes sense that she is sought out as a representative of Earth by the likes of the Silver Surfer and Galactus. The entire universe seems to be revolving around the imagination of a young black girl in the school yard, the way it revolves around all our imaginations. For me, that makes it a great and inclusive example of Afrofuturism.

TV networks are, apparently, now catching up with investing in Afrofuturistic narratives. On-screen adaptations are underway for post-apocalyptic books by author Nnedi Okorafor and the late Octavia Butler, a literary icon of Afrofuturism. I for one can't wait to see more from this rich genre of quality sci-fi.

To end, just a reminder that the best way to support this blog is to buy one of my books. Simply go over to Amazon, or Kobo and get one.
Labels: Comic Books Sci-Fi Music