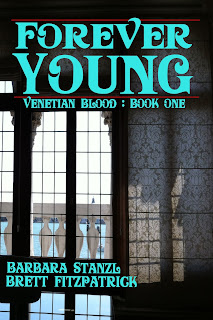 This book has been a work in progress for a long time. In fact, even though it is my latest release, it is the first book I ever started writing (along with my coauthor, Barbara Stanzl). The second book I started was The Pet Dragon, and that was almost ten years ago, followed by several other fantasy and sci-fi titles over the years, and in all that time we were still tinkering with Forever Young.

It has had a long evolution, with many changes. The book has moved setting from Trieste to Venice, the central characters aged from children to teenagers, and then to young adults. The cast of characters has expanded and contracted as the story has taken shape, and the antagonist has had many different names, forms, and relationships with the heroes. The thing that has probably changed most often, however, is the title. I won't list all the working titles that the manuscript has been stored on our hard drives under, but there have been many, and a lot of thought has gone into the choice of Forever Young.

So, after all this evolution, what has the story ended up being?

Forever Young has emerged from this process as a modern take on a classic Gothic novel, combining horror, death, and romance. It is not a romance, per se, and does not have any of the six-pack, love-triangle tropes of that genre, but it is romantic, in its own Gothic way. It is firmly in the tradition of the most famous vampire books of the genre, such as Beam Stoker's Dracula, but while it shares their DNA it has evolved with the times, creating something very different and new. It is a self-contained story, but sprinkles enough hooks that it is obviously a good jumping-off point for a series, and would work well, for example, as the sort of brooding and intense story that is so perfect for modern TV binging on platforms like Netflix and Hulu.

To go into a few specifics, without getting too spoilery, the book introduces us to Jasmine, a modern student of anthropology, who is used to investigating the remote and strange enclaves of humanity, whether they be stone age tribes or new age cults.

Newly arrived in Venice, to help an enigmatic professor, she accidentally meets Violetta, who is trapped in an ancient and violent world with no escape. When the two meet, Jasmine gradually awakens in Violetta the desire to escape.

Jasmine is a lifeline for Violetta, but the relationship goes both ways and it is just as likely to pull Jasmine to damnation as it is to lift Violetta to salvation, especially after Jasmine meets Sebastian, a man Violetta has known for a very long time. Initially Jasmine cannot tell if Sebastian is Violetta's friend, brother, or lover, but she does know how she feels about him.

The awakening in Violetta does not go unnoticed by the man Violetta calls her father, the man who has had the greatest influence on her life, the man who refuses to let her go. Join them all, and a cast of other colorful characters on a trip through a sombre lagoon to the ancient city sitting serenely at its center, Venice, where noblemen, noblewomen, spies, magic, slaves, and monsters mix, and Jasmine learns more secrets than is healthy.