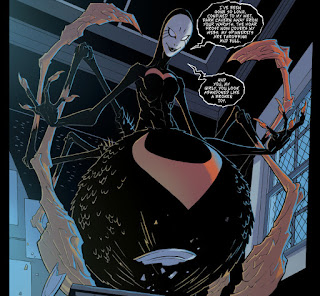 I’m reading Imaginary Fiends at the moment. It is a comic book from Vertigo Comics and I’m five issues in and I’m enjoying it immensely. The concept for the book, taken largely from the publishers website is as follows: Melba attempted to murder ten-year-old Brinke Calle after her best friend, a spider girl named Polly Peachpit, told her to. Melba spent seven years in a mental health facility, before she received a visit from FBI Agent Virgil Crockett. Crockett explained that there is another world beyond ours, where hungry spectral aliens stalk the minds of the impressionable and weak. These things, called IMPs (Interdimensional Mental Parasites) feed on compliance. They convince hosts to do things for them, and the more they feed, the stronger they become. More IMPs stream into the world each day, invisible to everyone but the host.

After years of drugs and counseling, Polly and Melba have developed a unique relationship—and to Crockett, this relationship represents something to work with. In exchange for release from prison, Crockett asks Melba (and Polly) to serve as IMP hunters. For Melba, it’s a chance to prove that she’s innocent, convinced to murder by a monster...a monster she must now unleash.

This premise might not be too original, but it is well executed. I started out only being tangentially interested in it, but it has sucked me in more and more with every issue. The characters are diverse and engaging and the art is well drawn and atmospherically colored. The pace feels slow but there are still a lot of twists and turns packed into the story so far. There are also a couple of shock reveals that are very effective, saved up until the best moment to be deployed, usually at the end of an issue.


Imaginary Fiends is about a world where imaginary friends are real, except they can become malignant over time, and there is even a government department dedicated to dealing with them. The problem is that the imaginary friends are actually creatures from a parallel dimension, given form and tempted to come to our dimension by the thoughts of young minds. Like I said, that’s not super original, but they commit to it and explore what a world where this can happen might be like. There are huge changes to the fabric of space and time, but not much that you actually notice, if you aren’t blessed with the ability to see the imaginary friends.

Apart from the government agency, which operates in secret, this is our world, at least a version of our world, imagined as some sort of Lovecraftian small-town America. The book has a lot going for it, but the most engaging element is the character design of the imaginary friends. The main imaginary friend, the most important one who is a central character in the book, is beautifully designed. Her name is Polly Peachpit and she is half spider, half No-Face from Spirited Away.

She is not a creature created by her human friend’s imagination, however. She is a higher dimensional being, with strange powers, and who is only tangentially attached to our reality. One of these higher dimensional beings, who isn’t pleased at ending up somebody’s imaginary friend, calls our world a: flat, inelegant, microcosm… where his kind are: slave to the minds of pathetic beings made out of liquid and need.

There are a lot of nice attempts, like this, to get into the head of creatures very different to us. They menace the humans, but they don’t do it from the shadows. They are onstage, and we get to see how they think. 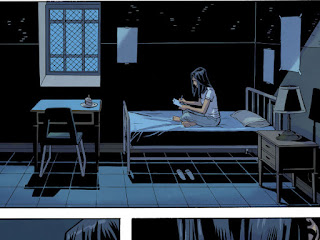 In issue four we spend some time with a very nicely designed imaginary-fiend character called Fraidy Cat, and I like the juxtaposition of the creature’s childish name and its deeply evil soul and huge powers. It is beautifully imagined as a charred and emaciated cat, but enormous.

This mix of terrifying pan-dimensional being and childish name is something all the monsters have in common in this book, and it works every time. It is a chilling mix of the childish and cute with the monstrous and powerful. The interactions between the various imaginary fiends and the humans of the book, both those who can see the creatures and those who cannot, become ever more complex and spooky as the story progresses, and not everyone escapes the encounters alive.

In issue five, a character who cannot see the extra dimensional monsters walks through the blood of an injured imaginary fiend that she cannot see. She trails the invisible blood through the house on her feet, leaving bloody footprints she cannot see. It is a clever idea and a creepy image. It is the sort of imaginative touch that this book is full of, and why I keep coming back for more.

Issue five is also where the book takes a definite turn from psychological horror to explicit, stomach-churning gore. One of the bad guys gets his face burnt off with acid, and then his brain starts to come out in lumps. There is then some dark humor as he complains about his painkillers wearing off and promptly pitches forward to fall face-first onto the wooden boards of the latest house of horrors this book has taken us to. It’s all lovingly drawn with the same attention to detail as anything else in the book, which is a good thing and a bad thing. These are quite disturbing images, after all, and the comic book does not shy away from that.

I think of the book as more sci-fi than horror, in the tradition of the X-Files, because it makes some attempt at coming up with a reason for these strange creatures being among us that does not rely on magic. I think this element is very successful and just makes me enjoy this quality comic book all the more.

And I’m not alone in liking this title; Polygon has called it: DC Comics’ best new horror comic in a long line of horror comics that came before.

I recommend picking up issue one right now, from wherever you get your comic books from.

To end, just a reminder that the best way to support this blog is to buy one of my books. Simply go over to Amazon, or Kobo and get one.
Labels: Comic Books DC Comics