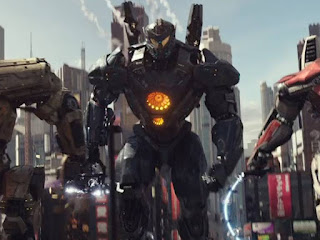 I loved Pacific Rim 2, and was grinning with glee at all the giant-robot action lovingly rendered on the big screen for my enjoyment. I don’t want to oversell the movie, though. I am a huge fan of giant robots and this sort of movie is slap-bang in the center of my wheelhouse but I am aware that for somebody who is not quite as in love with huge mechanoids as I am, this movie may not appeal quite as much. I have written about my love of giant robots before, so I won’t go into that again here, but I do think it is worth a few words to explain just why this movie is a superior example of the genre, and may be worth your time, even if you are not as into giant battling automata as me.

The first Pacific Rim came out way back in 2013, and it told a story of our world in the future, in the midst of a colossal battle between giant monsters from another dimension and the giant robots defending the Earth from them. Unfortunately, the original director Guillermo Del Toro was unable to return, and neither did many of the original stars, meaning there had to be wholesale cast changes for the sequel. That isn’t such a big deal in a giant robot movie, of course, as we are here to see the robots and monsters, not some star or other. 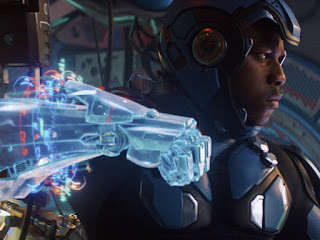 John Boyega now leads the cast of Pacific Rim: Uprising, and does a great job. He commits entirely to the crazy concept of the movie, and sells his character. He is an actor with undeniable charisma, and he commands the screen, both inside and outside the cockpit of a giant robot.


As Vulture notes, Pacific Rim: Uprising is the most China-bait blockbuster we have yet seen. The first film was a modest success in the States but it had the sixth-biggest Chinese box-office opening for a Hollywood film. This has resulted in Uprising having entire plotlines in Mandarin, and substantial roles for Chinese stars Zhang Jin and Jing Tian.

A lot of work has gone into the story, and these things are always a tightrope walk between giving us the biggest battles the special effects budget will stretch to, and filling the gaps between with something engaging. It is an extremely difficult job, and the writers have done a pretty good job. There are attempts to imagine what a world recovering from giant monster attacks might look like, and there are huge skeletons strewn around the landscape. There are fallen robots, too, which are scavenged for parts by petty mobsters and street kids. This is quite an effective device, giving a rebellious glamour to the kids recruited from this background to defend the planet.

The story in a giant robot movie is definitely secondary, however. It is there to smoothly set up the action, and get us emotionally invested. Other than that it should do its best to keep out of the way. This is one way that Uprising gets things right. There isn’t much nuance or originality, but it efficiently moves from one set piece to the next. And those set pieces are excellent. 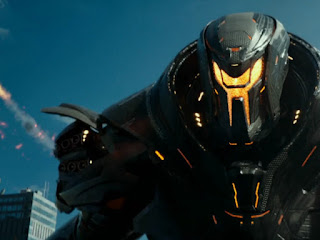 The early Jaeger fights between the good robots and an evil robot called Obsidian Fury gave me goose bumps. The monster robot trashes Sydney before being run to ground in Siberia, and it has a malevolent personality conveyed exclusively by the way it moves. It stalks around the landscape, head down, going about its evil schemes, then running like a coward whenever reinforcements arrive. I loved it, and cheered when Obsidian Fury got its comeuppance. Another big plus is that now a lot of the action happens in bright daylight, under blue skies, rather than the gloom and rain of the first movie. You get to see what is going on, without the flattering shadows of low light conditions to hide any missteps in the rendering of the monsters and robots. Special effects houses have to work hard to create models that can stand such close scrutiny, and I am pleased to report that the 3D models in Pacific Rim 2 pass muster. 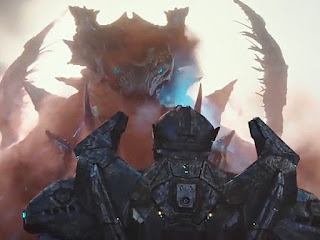 The differentiation between Cthulhu monsters and sleek robot gladiators works well, too, making it impossible to confuse which titan you should be rooting for. When some sleek, white drones go bad, they immediately sprout spikes and start dripping slime, so you know they have now become adversaries rather then allies. It’s hokey, but it works surprisingly well. The action is also slow and weighty, unlike the bouncy chaos of a Marvel movie or a Transformers film. When a punch from one of the Jaegers lands, it feels like a freight train crashing into the rocky cliff face of the monsters’ hides.

The movie is a lot of fun, and you will get your money’s worth if you enjoy it even half as much as I did. Go see it now to show your support, so we can keep this franchise going as a more fun alternative to the dire Transformers movies.

To end, just a reminder that the best way to support this blog is to buy one of my books. Simply go over to Amazon, or Kobo and get one.
Labels: giant robot sci-fi movie