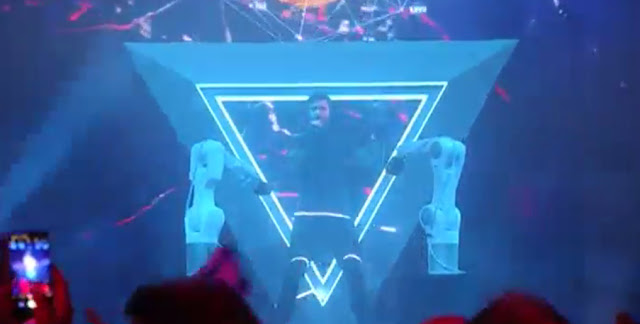 I'm a big fan of the Eurovision song contest, so much so that I wanted to write about it on my blog. But I hesitated because I try to keep the blog pretty keenly focused on sci-fi, fantasy, horror, and promoting my books and associated merch. What, I thought, does Eurovision have to do with any of that?

After all, the Eurovision Song Contest is an international music competition held primarily among the member countries of the European Broadcasting Union. Each participating country performs a song live on television, then there is voting for the best song. That's not a hugely sci-fi concept, in and of itself.

So I was watching it, all four hours of it, not expecting to see anything that really fit with this blog, no matter how much I had to say about the music and the event.

But then came the Azerbaijan entry, and to my surprise it was a real dose of sci-fi.


The singer was called Chingiz, with a song called Truth, and he was dressed in the sort of leather tabard very popular with the cast of sci-fi B movies, and it doesn't stop there. His performance had possibly the first robot backing dancers anywhere, ever in the world, that I have seen, anyway. Two industrial robot arms project a heart onto his chest with lasers, and they did this live. 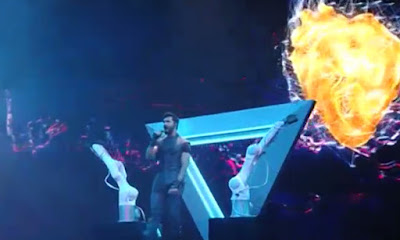 It's a great idea, although the robots are pretty static, so Chingiz has to just stand there while they use their lasers to paint the heart on him. The performance ends up frozen in place, which undoubtedly hurt Chingiz' chances, but I found it fascinating. While the robots were doing their thing, in the background a giant yellow heart pulsed, then exploded during the chorus, and a giant android head appeared. It all looked like a scene from a sci-fi movie, which I absolutely approve of. 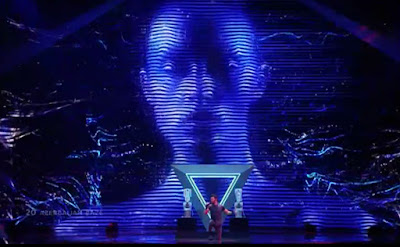 Chingiz explains: The idea is that my heart is broken and I need to replace it with a bionic one.

I was still smiling about Truth when the penultimate performance came, a song called Zero Gravity that had easily as heavy a sci-fi vibe as Azerbaijan's robots. It was much more mobile too, with three women bouncing around on giant carbon poles, while views of galaxies and planets were projected behind them. In fact, sometimes, thanks to the marvel's of augmented reality, the stars and planets were floating in front of them too. It was ace, and all the talk about what would happen if Australia won made sense. This was a stand out song with a real chance of gathering the winning tally of votes. 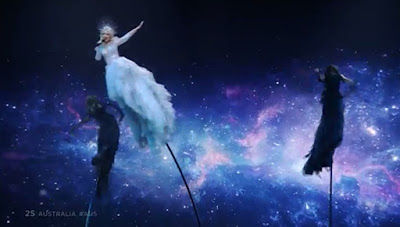 I can't talk about this year's Eurovision without mentioning one more thing. I have to note that, though Eurovision is a joyous and beautiful even, it has been overshadowed somewhat this year by the politics of the host country.

It is Israel that is hosting the contest this year, following Netta Barzilai's win at the 2018 event. Having Israel as the venue has led the BDS movement - BDS is Boycott, Divestment, Sanctions, a Palestinian-led movement for freedom, justice and equality - to call for a boycott of the competition to seek to remind the world of the military action in the Gaza Strip, which has killed hundreds of Palestinians, among many other issues relating to Israel government policy toward Palestine.

I personally don't agree with boycotting this least right-wing of events. I do agree that it is important to be reminded of the political situation, even as we watch the kitschest musical event there is. I also feel that Eurovision knows this, and I feel they showed it via Madonna's performance. To my eyes Madonna's contribution, which was kept secret until the last moment, was a not so subtle rebuke to right-wing governments, of the kind that is in power in Israel currently. The song was ambiguous, but I feel the staging, with costumes including armor and gas masks, left little doubt that it was all about the political situation in Israel and policies toward Palestine.

I was very pleased. Because whatever Eurovision is, it certainly isn't about support for right wing nutcases, even if they often run the countries that host the show. I was expecting some coded resistance from Eurovision, and I think we got that.

To emphasize the point, the performers from Iceland held up a Palestinian banner, stony faced as the camera went into closeup on them during the voting.

With such an unpleasant subject out of the way, let's round out the post with some more Eurovision facts for your entertainment and edification.

The competition started out as the Sanremo Music Festival held in Italy since 1951, and has been broadcast every year since it began in 1956, making it the longest-running annual international television contest ever, and one of the world's longest-running television programs of any kind.

It is also one of the non-sporting events with the highest audience figures, up around 600 million international viewers. Ireland is the most successful competitor, with seven wins, including four times in five years in the 1990s. Past winners include ABBA (for Sweden) and Celine Dion (for Switzerland).

To end, just a reminder that the best way to support this blog is to buy one of my books. Simply go over to Amazon, or Kobo and get one.
Labels: Sci-Fi Music