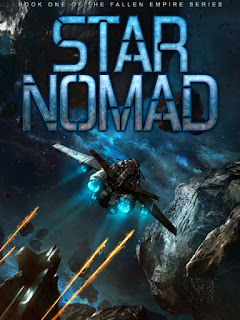 I’ve just finished reading Star Nomad by Lindsay Buroker, which has a really cool cover. A cover with a beautifully painted spaceship is always enough to attract my attention, and this book has one, front and center. The author announced the publication of Star Nomad on her website back in 2016, so this is not a latest release, but that has never put me off a book before. So, emboldened by the great cover, and not put off by the book’s age, I downloaded Star Nomad from my usual supplier, KOBO, paying the princely sum of no money at all.

The book starts with a nice introduction from the author where she talks about being a fan of Buck Rogers and the original Star Trek, both good signs in my opinion. As usual, I can’t help myself when it comes to letting a few small spoilers slip, here and there, but I hope nothing that will prevent a reader enjoying the book.

The story itself starts with a character called Alisa scavenging in a derelict spaceship scrapyard for something spaceworthy, along with her friend Mica. It is a great introduction to both the world and the characters, and it immediately drew me in. We find out that Alisa is an ex-soldier, stranded far from home, penniless, only recently out of a regeneration tank, and that she is separated from her daughter. She is also completely certain that her husband has been killed, gone missing when her home planet was bombed, but I am not so sure. She is in quite a desperate situation, of course, but she has kept her sense of humor.


The abandoned scrap yard is riddled with crazies and rats, but they have a spaceship in their sights that they are hopeful will fly with only a little maintenance, Alisa’s mother’s freighter, a hunk of junk that killed her mom when its life support failed. It takes a couple of chapters for the women to bring this plan to fruition, and in these chapters we see the two women are capable of looking after themselves, and we get a couple of nuggets of information about the galaxy they live in.

Before they get out of the junkyard, they discover a threat even more dangerous than the crazies and the rats, a cyborg who used to fight for the Empire. That’s right, this book is set after a confrontation between rebels and an empire, a conflict the rebels won, which will appeal instantly to fans of Star Wars, like myself. Star Nomad gives a glimpse of a possible aftermath of an Empire defeated, and it is one I find interesting and persuasive. Neither the rebels nor the Empire runs the planet Alidia is trying to escape from, and law and order is breaking down completely there, like a failed state on a planetary scale.

Alisa ends up with two passengers and a security expert, along with her friend Mica, and the android, and they all have secrets. Personally, I love stories about a ragtag group in a spaceship, which is an iconic setup with a lot of potential, especially when you factor in all the secrets of the people on board. Of their entire secretive gang, the ex-imperial cyborg is the most tight lipped, with the most baggage and secrets. He won’t even tell anyone his name, and he makes everyone nervous just to have around. He even forces the spaceship off on a dangerous detour that is connected with his murky past.

The cyborg is an interesting character, mourning the loss of certainty and security that has come with the fall of the Empire. He argues with Alisa, who is an ex-rebel fighter, and he makes some good points. He talks about the crazies, gangsters, and warlords that have filled the power vacuum left by the fall of empire, and he asks if that is the world the rebels really wanted to build.

The book has an interesting premise, and it is also high-grade space opera with action scene after action scene. There is plenty of spaceship combat, ground combat, and dicey situations, all written to be tense and pile on the troubles just when you think the heroes have fought free.

There is other stuff to like about the book, too, for example when the spaceship is traveling through an asteroid belt, one of the characters mentions the Yarkovsky Effect, which is a real thing, but which I had never heard of. She also has a nice turn of phrase when describing the most mundane aspects of space flight. A pilot switching on autopilot for docking, for example, thinks about how it is easier to, “let the computer line up the tabs with the slots.”

As usual, I have some reservations, even though I really enjoyed the book. There are a lot of plot points that revolve around male on female sexual violence, specifically rape, which is something I don’t particularly like in my fiction. At least these situations are written by a female author, and so these scenes are depicted as violent and ugly, rather than titillating. The fact that I don’t like elements like this is a personal preference, of course, and would not effect any star rating I end up giving the book on Kobo.

The book is 86,000 words in length, which is respectable, and it simply flies by, as we are taken from one action set piece to the next, with brief stops for world building and character. It feels like what it is intended to be, an episode in a story that has a lot in common with an ongoing, episodic, TV show. It sets up a bunch of mysteries without giving the answers to any of them. I imagine that’s by design, with the series intended to be binged lie a Netflix show. In fact, the author wrote the first three books before releasing any of them, so they were released together, Netflix style.

The book invites you to build a relationship with the author through an email newsletter you can subscribe to. That’s not a bad thing in this case, because the author is enthusiastic and dedicated. There is even an extended section in the back of the book where the author answers questions put to her by people who read the book before publication, and it is an entertaining and chatty section that gives a lot of insight into where the book came from. It confirms my suspicion that the author likes watching TV sci-fi more than reading sci-fi books, for example.

The book rounds out with the first chapter of the next in the series, and the hope is obviously there that by now you’re hooked and will be downloading the next ebook as soon as you can, and who knows, maybe I will be doing just that.

To end, just a reminder that the best way to support this blog is to buy one of my books. Simply go over to Amazon, or Kobo and get one.
Labels: Freebie sci-fi novel space opera