The Battle of Hollow Jimmy - Review 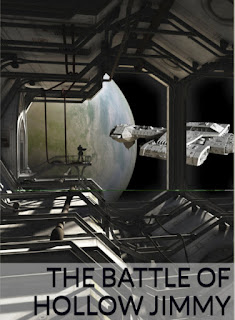 The book I am reviewing in this post is The Battle of Hollow Jimmy, written by Becky Black. A quick look at her author website indicates that she has written an interesting selection of books, with sci-fi as only part of her prodigious output. It turns out she now produces m/m and f/f romance, and her science fiction was written years ago. I get that she's more interested in other genres now, but I enjoyed The Battle of Hollow Jimmy and I hope she will one day come back to producing a few more sci-fi books, along with the other writing she does.

According to her bio page Becky Black is a UK author who started putting words down back in 2003 and hasn’t stopped since. She is a long time science fiction fan who likes stories about people who find themselves in the trickiest of no-win situations. She describes her writing as chasing her characters up trees and throwing rocks at them until they figure a way down. That’s exactly the kind of pulp writing style that I often enjoy, and it certainly works well in this book.

The Battle of Hollow Jimmy is a sequel to Shoot the Humans First, but I read it without reading the previous book, and I enjoyed it. I got my copy of the book at Kobo, but it is available other places too. The first attractive thing about the book is the price, it is free. It is a completely free book, of over 100,000 words, which is a bargain that is difficult to beat.

The book also has a very nice, professional cover, with a spaceship seen maneuvering by a figure hidden among the struts of a space station. It is quite a complex 3D render, and it looks great, especially for a free ebook. The text inside also starts well, as we are introduced to Maiga, who is buying a spaceship with what she considers to be tainted money. Maiga is the most intriguing character, all through the book, and this opening scene is a great introduction to her.


The story then widens out from Maiga, and we are introduced to a setting that is a little like that of the Battlestar Galactica universe, but with important differences. The Earth has been destroyed and humanity has been reduced to a convoy of spaceships and a few other assorted outposts, but there are no Cylons. The Hollow Jimmy of the title is one of these last outposts of humanity, a space station, where an enclave of humans lives among the station's alien inhabitants. After buying the spaceship, Maiga soon goes into a partnership with an older woman called Wixa, which is a good move because the two women's strengths and weaknesses compliment each other.

Maiga has to decide if she is going to put down roots on the space station and drift into the life of a trader, or if she is going to leave, and chase down the last convoy of human ships. While she is deciding, we see more and more of Hollow Jimmy, and the characters who make their home within it. There is quite a community, like the regular cast of supporting characters on a show like Star Trek: Deep Space Nine.

Maiga’s trading continues and it takes her away from the station on regular cargo runs, where coffee turns out to be a very high value commodity, perfect for Maiga’s small spaceship. When she isn’t off station delivering cargo, the book can be surprisingly cozy and domestic. There is even a party thrown by a cat fanciers club, where the denizens of the space station show off their cats over tea, which is delightful and weird, and made me smile.

Along with the trading and scenes from space station life, there is also battle. Space combat in the book can be initiated while in FTL by one ship using its tractor beam to slow its target down to a speed where it can be targeted, which is an interesting idea.

A little before the half-way point we are introduced to an evil and crazy space pirate who wears a coat made out of alien skin. The pirate keeps a secret on her ship, welded up behind impassable bulkheads. Her part in the story unfolds slowly and satisfyingly, as just one element in a complex and evolving situation.

Maiga seems slightly standoffish at first, but she is later reveled to be dealing with some extremely difficult episodes in her past. She is suffering from PTSD because of them, and has to run out of a room at one point as she starts flashing back to these horrific experiences. It is unusual writing for sci-fi, where most characters shrug off endless amounts of combat and numerous near death experiences with no ill effects to their mental health at all.

I enjoyed the book, as you can probably tell, but it is not without some flaws. There is some stuff about young female recruits being taken out of military training and used in brothels that I did not like. The idea is that they will be agents and the brothel will be a good place to gather intelligence, and who knows, this may happen in the far future, but it is a little distasteful to see women being prostituted as a plot point.

The battle from the title of the book also turns out to be little more than a skirmish. Tension builds between petty gangsters, the pirate, and the good people of the station. They are all vying for control over the small human community on the out-of-the-way space station. A lot of sci-fi deals with huge threats, endangering entire planets, and sometimes even entire galaxies, but this book is much more restricted in what is at stake. The story happens against a backdrop of greater events, to be sure, but is essentially a very small story.

There are also one or two typos in the book, but not so many that it spoiled my enjoyment. The book is a slice of life, seen through the eyes of a group of interesting characters, which might be a disappointment for anyone expecting a battle for control of an empire, but I enjoyed it. People have mostly been giving it four and five star ratings on Kobo so I can’t be the only one. Also, in case you forgot, it’s free. I can highly recommend giving this slice of sci-fi a try.

To end, just a reminder that the best way to support this blog is to buy one of my books. Simply go over to Amazon, or Kobo and get one.
Labels: review sci-fi novel self-publishing