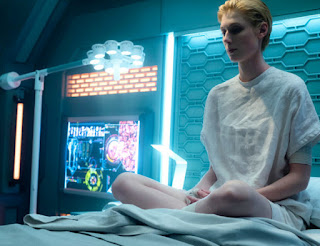 I am so angry at The Cloverfield Paradox because it had all the elements necessary to make something great, but spoiled it by forcing these elements into the service of possibly the worst screenplay ever written. Seriously, you could get a better piece of writing by scattering corn on the keyboard of a laptop and letting a hungry chicken peck at it.

Make no mistake, this is a terrible and stupid movie, but there is a lot of good stuff here. The acting, for example, is great. The entire cast of talented and serious actors work their asses off to sell the crap they have been given. It isn't humanly possible to actually save such bad writing with good acting, but if it was, this team would have pulled it off.

I was very impressed with the casting, too, which resulted in a diverse spaceship crew with real presence. The conflicts between them set up in the screenplay are all laughable, but these characters go at each other with admirable commitment.

The special effects were great. This isn't cutting edge stuff, but it was competently done and the space station, in particular, was attractive. It made no sense that spinning rooms had walls outermost, instead of floors, something 2001: A Space Odyssey got right back in 1968 or that people stick to the non-spinning floor of corridors as well as the spinning rooms. There were big problems with the physics of it, is what I’m trying to say, but it did look good. 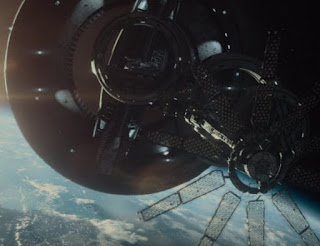 The lighting and camera work are good too. Again, nobody is going to be winning any awards for this movie, and it wears its influences, mostly Ridley Scott, on it's sleeve, but it wasn't bad.


Even little things like the costumes are good. Both the jumpsuits and spacesuits the crew wear are detailed and have high production values. And the sets were good, too. The interior of the space station hits that balance between claustrophobia and open spaces. It all looked shiny and high-tech, like a science installation should, and none of it wobbled when people banged into it. It doesn't have a lot of character, but it makes a good backdrop for sci-fi action.Spoilers are coming - beware if you want to give this movie a shot. Probably the less you now the better.

Okay, for those of you with the constitution to deal with spoilers, let's continue. The creature design is pretty good, too, all three seconds of it. The beast we see at the end is, apparently, the Cloverfield Monster, and it looks tall and meaty and toothy and fierce, everything a good monster should be. I knew it was coming, because I got bored half way through the movie and started reading audience reviews on IMDb, and I knew its appearance would be short, but I didn't realize quite how short. I was counting - one Mississippi, two Mississippi... - as I watched it rear up from the clouds, and I didn't even get to three Mississippi. That's how short the monster's appearance was. But there is a monster, and it looks great. 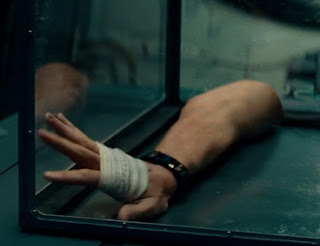 All in all, the movie has everything you need to make a great slice of sci-fi. It’s a crime not to put them together right. We get so few real sci-fi movies these days, having instead to make do with science fantasy like Star Wars or superhero movies like The Avengers, both genres that luckily I also really love, but sci-fi is different, it's something special, something classy. The last great sci-fi movie, with spaceships and everything, that came down the pipe was Arrival, back in 2016, so I'm always rooting for a new sci-fi film. I always want the best for it, I always want it to be good, and I'm always prepared to put up with a few flaws. Then comes The Cloverfield Paradox. I tried to like it, I really did, but... I couldn’t.

I'm still seething with anger, even though I watched this last night and I have theoretically had time to come to terms with what I saw... but no, I’m still angry. There was so much good sci-fi stuff, so thoughtlessly squandered on such a cut-and-paste job of a screenplay that I want to yell at the people involved in putting this together. I want them to explain themselves, to feel some shame.

I mean, these days, screenplays are routinely fixed before filming begins, and they often get polished up some more even after shooting begins. It is common to hire somebody to punch up the dialogue of a screenplay with a few jokes. I even think this happened with the screenplay for The Cloverfield Paradox. There were a couple of genuinely funny lines that landed. If they were willing to do this, couldn't they have hired somebody to fix the numerous other problems. They could have hired somebody to strip out all the exposition, for example. The movie is so exposition heavy, and it really doesn't need to be. It leaves several important things unexplained, such as how an arm can crawl along the floor on its own, and what the Cloverfield Paradox even is. The Cloverfield Paradox is the basis for the giant space MacGuffin at the heart of the space station, so why, if you aren't going to explain the big, important stuff, why do you bother explaining anything at all?

It would have been great, for example, if they hadn't tried to explain future energy politics, because what they came up with didn't make any sense anyway.

They could also have hired a science consultant to make the screenplay a little less aggressively stoopid. Almost every review of the movie I have seen focuses on one huge science error, the fact that gravity doesn't work like that, but this is far from the only one. The movie is full of terrible dialogue where science words are sprinkled like decoration. The movie would even have us believe that it is possible to get lost within the solar system. That none of the scientists could just look out the window and orient themselves again after the space station jumps.

There are so many areas where the screenplay could be improved with just a little work by a hired gun. The question is, would that have turned this movie into something watchable? Unfortunately, the answer is no. Even if you fix all the stupid science errors and rip out seventy percent of all that exposition, you still have something that is, at heart, crap. 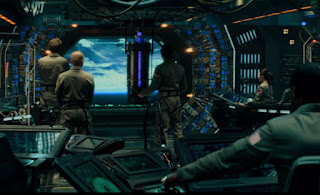 The movie is an inexpert blending of previous sci-fi blockbusters. It combines the space escape shenanigans of Gravity with the cosmic horror of Event Horizon, adds a dash of Alien-franchise steam jets, flashing lights, and corridor running, then nails the whole concoction onto the Cloverfield franchise with a few tiny, unconvincing dialogue edits... oh and two and a half seconds of monster.

The movie is cursed with an inept screenplay, written by somebody who needs a lot of constructive criticism and confidence building in order to find their own vision, their own voice, assuming they even have one. The screenplay is a work of juvenilia at best, or proof that the writer simply hasn't an original idea or ounce of intelligence in their head at worst. It should never, ever, ever have been made.

It did get made, though, so the question is, is it worth a watch? If you are like me, and you feel a sick compulsion to watch sci-fi, no matter how bad, and you are capable of writing a lot of headcanon on the fly and overlooking a whole load of stupid... then... and only then... the first half of the film is watchable for the pretty sci-fi visuals. You can safely check out round about the forty-five minute mark, secure in the knowledge that you have seen all you need to of this misguided stab at a movie. If you are a normal person, on the other hand, who isn't going to sit through nonsensical science gobbledygook and manufactured tension just for a few shots of a nice 3D space station, then you had better avoid The Cloverfield Paradox.

To end, just a reminder that the best way to support this blog is to buy one of my books. Simply go over to Amazon, or Kobo and get one.
Labels: review sci-fi movie