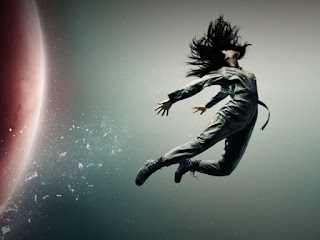 I have decided to try and watch The Expanse again, after numerous failed attempts. I tried to watch it when it first came out, and I failed. There were a few elements I didn’t like, and I gave up on it quite early, but as a fan of sci-fi I feel a duty to push through and try and at least watch season one.

The show is based on a series of novels by Daniel James Abraham and Ty Franck, writing as James S. A. Corey, and it is set two centuries in the future after humans have colonized the solar system. Tensions have sprung up between the inhabitants of Earth, Mars, and the asteroid belt, and when an ice-hauling ship is destroyed, it kicks off a chain of events that bring the factions to the brink of war, with the crew of a spaceship called the Rocinante in the center of it all.

That’s pretty much all you need to know to enjoy the show, but you get a whole lot more information than that on the intricacies of future human politics and economics. The first episode devolves in places into an impenetrable wall of exposition. Exposition is a two-edged sword.


Ty Franck initially created The Expanse as the setting for a tabletop role playing game, which helps explain all the world building. That doesn’t explain why the writers felt compelled to inflict all this background as a lecture to the viewer. This was one of the things that put me off the show in the first place. The authors have created an intricate background for their story, and they want the audience to know it. Only 15 minutes into episode one, I’m guessing the script was hundreds of pages long, and all that text had to be memorized and delivered by various unlucky actors. 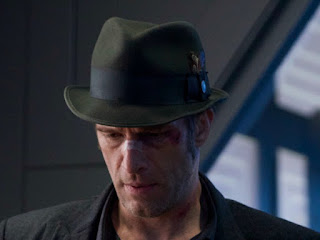 In the middle of this gigantic infodump, one of the first characters we meet is a detective in anachronistic hat. I hate that hat. I hate writers setting something in the future, then making the people there like stuff from contemporary culture. It would be like a detective of today wearing a top hat while investigating. It just wouldn’t happen. I suppose it is a way to signal that this character is a 50s pulp detective. But I’m not here for a hardboiled detective story, I’m here for sci-fi. The two could be combined elegantly, but that is not the case in The Expanse. The character feels like he has come through a rift in time and space. He feels bolted onto this story, just so we can get more exposition about the various corporates, gangsters, and factions of this world. Like Pizza Hut putting cheese in the pizza crust, The Expanse keeps finding new places to put even more exposition. Unfortunately, the exposition we get is just more empty calories.
When people stop spouting exposition and actually talk to each other, I'm sad to say that the conversation in the show is badly written, too. There is an awful lot of posturing and macho BS. Everyone is speaking in pure tough talk, like they are colonial marines from an 80s movie rather than freighter crew, scientists, and politicians. The macho posturing is taken to an extreme in scenes featuring the hard-boiled detective in the hat. There is a creepy encounter in a bar where we are introduced to a female detective that is so badly written it made my toes curl. The hardboiled detective in the hat intimidates her date and makes him leave, which she seems fine with, then tells her he needs her female intuition, which she isn’t insulted by, and then the writers put these words in her mouth: Are you asking what I did? Bang ever spacebucker I could find.

He then makes an awkward and uninvited grab for her hand and asks her to admit that she misses him. She looks upset and unsettled as he finally gets up and leaves her alone. This guy is extremely unlikable in just about everything he does, and I’m guessing we are supposed to identify with this 50s, loose-cannon, misogynist transplanted into the future. 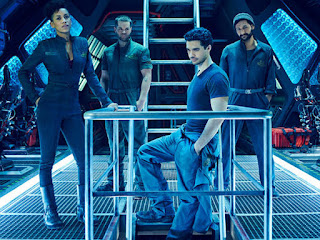 But, like I said, I’m going to be strong this time, and try not to allow all the gobbledygook or unrelatable characters to push me away. I make it all the way to the end of episode one, and then a character gets unceremoniously fridged. This is all too often a hallmark of supremely lazy writing—using the death of a character as "cheap anger" for the protagonist, and devaluing the life of that character in the process.

I’m extremely allergic to fridging and this was probably where I checked out last time I tried to watch the show. It took a supreme effort of will to watch episode two, but I did it. I know what I’m in for with an episode of The Expanse now. I know the writing will be bad, and that sections will be hard to watch, but there is some good stuff that keeps me coming back. 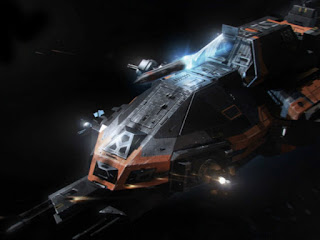 The good stuff includes the fact that the spaceships are very nicely designed. I would even prefer the camera to linger on them a little more, because they look great. I also love the way the spaceships have to flip over and fire their engines to decelerate. A lot of this “space stuff” is just great. The space battles are short and tense, because none of these spaceships have shields, and some money was obviously spent on the special effects. Even when there are no space battles, there is still some solid space action. The writers are good at coming up with inventive ways to show the dangers of living in space. This is undoubtedly where The Expanse gets its reputation for realism from. It is one of the hardest of hard sci-fi shows on TV. It is a proud boast of fans of The Expanse that it is more realistic than other sci-fi shows, unfortunately, this extends only to the physics of the spaceships, the story itself has very little realism to it at all.

The show is a tough watch, due to general badness of plot and dialogue, but there are rewards in the form of beautiful spaceships doing cool stuff. For me – this time – that is a trade off I am willing to make.