Writing a Novel on a Phone 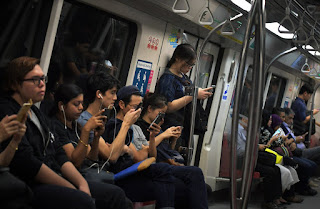 I do a lot of writing for my novels on my phone. This isn't by choice, in fact I wish I had a small studio where I could work instead. In my imagination, the place where I write would be in the Hamptons (a part of the world I've never even visited) and my desk would have a view overlooking the ocean. I would sit there, at an ultramodern computer, with a mug of coffee and some nice salty crackers with vegan cheese, staring out to sea whenever I needed to find inspiration. I would look out at the massive banks of cloud hanging over the dark waves and see them as giant spaceships hanging in the air above alien landscapes. 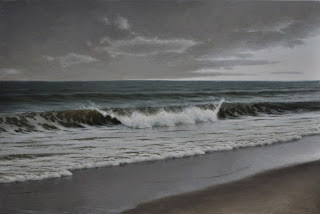 Unfortunately, I do not have such a studio, all I have is the coffee and the vegan cheese. More importantly though, I don't have time. I don't have time to just sit at my computer dreaming up sci-fi stories because being a novelist is not my day job, at least not yet. In order to get my novels written I have to squeeze words out in a rush, wherever and whenever I have the opportunity, and that means working on my smartphone. The average smartphone is easily powerful enough for use as a word processor but that doesn't mean there aren't limitations. The screen is small, making it harder to spot typos, and a virtual keyboard is far from ideal.


I can live with the discomfort and inconvenience of writing entire books on a mobile device because it is the only way I can get words put down on paper. I tidy them up later on my laptop, but the phone is essential for the first draft. I have written ten books and for all of them the vast majority has been primarily written on one phone or another, with an iPod doing sterling service for a couple of years, too.

In all that time, I have never settled on the perfect app for writing documents on the phone. Everything I have tried has had one annoying disadvantage or another. I have used, Google Docs, Google Keep, Word, various notes apps, and various markdown editors. Each one has had one or another of the following fatal flaws, which are my deal breakers, and will make me delete an app and keep looking.

Number one: The app has to have a word counter. There is no way for me to hit my daily target for words without one. There have been so many tines when I sit back, impressed with the huge amount of words I have just written, only to glance at the word counter to see there are just a couple of hundred words. It is the cold, dispassionate word counter that wipes that smug smile off your face, confronts you with the paltry sum of your efforts, and makes you keep writing. 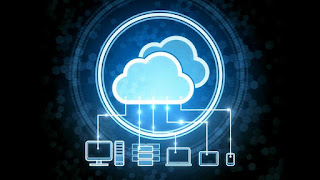 Number two: The app has to save documents as files in a place that can be found on the device's storage. I do not want to be faffing about, syncing clouds to get my work. I'm a drag and drop kind of guy. If I can't click on my file and drag it to my laptop's hard drive, then it is no use to me.

Number Three: The app can't make it too easy to accidentally erase a document. Any way that an app can help you write over a later version of a document (that has thousands of words in) with an earlier version (that has just a handful of words in) is bad.

There are other ways that apps have messed with me over the years but those are my big three deal breakers. I can't use Google Keep because there is no word count. I can't use Google Docs because it allows two versions of the same document to be open at the same time on your phone. If you close the one with fewer words in it after the one with many, that's the version that gets saved, and there's no way to get the wordier version of the document back.

The app I'm using at the moment is iA Writer, and I've only been writing on it for a couple of days but already it is making a good impression. That doesn't mean it isn't going to bite me in the ass in some way, further down the line, but right now it seems to be behaving. It has a word counter, it saves documents as MD or TXT files, and it puts them in a place I can find them, and I haven't managed to write over any of my documents with previous version, at least not yet.

So, until I can afford that writing studio in the Hamptons, I'm going to keep tapping away at my phone. I'm making good progress on number six in the Dark Galaxy series right now, on my janky old, underpowered, narrow-display, Vodafone branded, smartphone.

To end, just a reminder that the best way to support this blog is to buy one of my books. Simply go over to Amazon, or Kobo and get one.
Labels: self-publishing writing advice