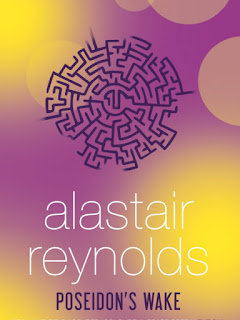 I was recently given part three of the sci-fi series, Poseidon's Children, by Alastair Reynolds, and I have just finished it, so now it’s time to post about it. I read the first book, On the Steel Breeze, last year, and it has taken me a while to get round to reading the final installment. I wrote a post about On the Steel Breeze, where I said that the book was about ideas. It is satisfying that some of these ideas accompany the reader all the way through this long trilogy.

For example, the first book includes a description of an area of Mars where machines have been released and forced to evolve by being made to battle each other. It’s an idea that pays off nicely at the end of the series as these artificial intelligences evolve from prehistoric monsters to cultured and advanced beings. The series is a future history which follows the expansion of humanity across the galaxy over the course of many centuries, so there is plenty of time for the Martian machines to evolve this way.


There is also an interesting thread of the story in book one about what it might mean to live in a society where every action is under surveillance. This is an idea that gets forgotten, as society regresses and is no longer technologically capable of this level of snooping. You certainly get a feeling for great swaths of time passing as the series continues to its conclusion. It is a true epic, but it is a little flawed, or at least it didn’t go in the direction I personally was hoping it would go in.

Both Wikipedia and Sci-Fi Now claim that: Poseidon's Wake follows on from On The Steel Breeze loosely enough that it easily stands on its own in narrative terms.

I’m forced to disagree, for example an important linchpin of the book involves talking elephants in space suits. For somebody who has read the first two books, which explain the elephant astronauts, it is hard to swallow. I can’t imagine what somebody who reads this book without the background of the other two would make of it. My advice would be to start with book one.

After this first book, where all the characters and elements of the series are set up, and then an alien megastructure is detected, I was hoping the second and third books would be about the exploration of said megastructure, and the results of that exploration. I was half expecting that book two would be about the investigation of the structure, and then book three would be all hell breaking loose. That is not what happened.

The second book, Blue Remembered Earth, was about traveling across space in a generation ship on the journey to the megastructure, and about the tensions, secrets and technological problems associated with that. It was interesting enough, but there was precious little about the alien artifacts that had set all the events of the book in motion. The generation ship did finally reach the system containing the artifact, right at the end, so I had high hopes that we would finally find out all its secrets in book three.

In fact I was absolutely sure that book three, called Poseidon's Wake, would at last deliver on the aliens, and it did, but not nearly as much as I was expecting. The artifact reached at the very end of book two is explored off screen, between book two and book three, and we are told that some kind of event was unleashed. I found this shocking, to follow this story all the way across space, via two very thick books, only to have the exploration of the alien artifact left undescribed. Then, as if that isn’t bad enough, another artifact is discovered, and another mission has to be organized to go visit it. It was like being pushed right back to the start of book two again.

There are differences, though, as drive technology has advanced and we may be off on another trek across interstellar space, but this time it is a relatively swift journey in an ordinary spaceship rather than a generation ship. The last installment, thanks to advances in medical science and other plot twists, also features a surprising number of recurring characters. So, again, just like in the second book, we follow an expedition to a mysterious solar system which contains an ancient and devastating secret, in the company of people we have already spent a long time with.

I found myself skipping forward, after almost three books of build up, unable to wait any longer to find out what all the mysterious alien stuff was about. I had to skip forward a lot of pages, because the actual encounter with the alien technology doesn’t come until right at the end. And then, as we are finally going to get to the secrets we have been promised, some plot reasons crop up that limit any exploration to just a few hours. The characters sent down to explore all the secrets can only spend a vanishingly short time in the place we have spent three enormous books traveling toward.

Because of this, I found the books good but unbalanced. There was too much build up and not enough payoff. If you know going in that these books are very definitely about the journey rather than the destination they are probably a lot more enjoyable. If, on the other hand, like me you wanted a story about explorers confronting ancient alien secrets, these books just do not deliver.

It is hugely frustrating because the solar system at the end of this truly epic journey is so beautifully realized. The alien megastructures encountered are only really seen from a distance, but they are beautifully imagined and described. The whole system is an atmospheric backdrop, even though it felt to me like it had not been well enough explored. I was disappointed in book three because of this, but if Reynolds ever decides to write a fourth book where he goes into as much detail as he did for the journey to the site, but tells a story of the exploration of the site, and the whole system, I would definitely continue reading this series. I enjoy Reynolds’ writing and his ideas, and I would like to read more about the aliens that created the megastructures, the Watchkeepers and the M-Builders.

To end, just a reminder that the best way to support this blog is to buy one of my books. Simply go over to Amazon, or Kobo and get one.
Labels: Ebook reviews sci-fi novel