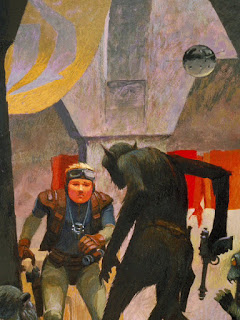 While watching Solo: A Star Wars Story, I was struck by a few things, some of which were glaringly obvious and which I have already written about, such as the extremely disappointing sexual politics, but some that were more subtle. One of the more subtle things I saw was the difference in border controls in Solo: A Star Wars Story, compared to the original Star Wars: Episode IV – A New Hope. In both movies Han Solo is attempting to move from one planet to another, and in both movies we see the local spaceport in some detail.

The thing I remembered is that there are no border controls whatsoever in the first movie. The space docks at Mos Eisley on Tatooine are shown as having no permanent force securing the border there. Even though, as Obi-Wan Kenobi tells Luke Skywalker: You will never find a more wretched hive of scum and villainy. 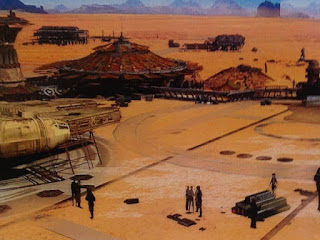 Neither are there fortifications of any type, or any obvious security, or access control systems. Anyone can wander into and out of the landing bays. At that point in the movie Luke Skywalker and his droids are being hunted by Darth Vader, who is throwing the entire might of the empire into apprehending him. And yet there are no border controls to hold Luke up for even a second. Even local criminals can just wander into the space port and intimidate the freighter captains smuggling for them. 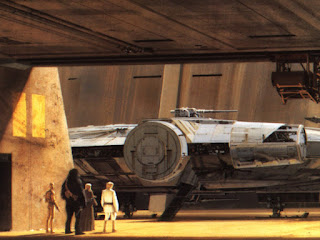 The space docks there are like a port in the olden days of tall ships, which is as it should be. You can land, disembark from your freighter and roll into a local tavern without having to be scanned, searched, present any documents, or wait to be allowed through a fence or a wall. 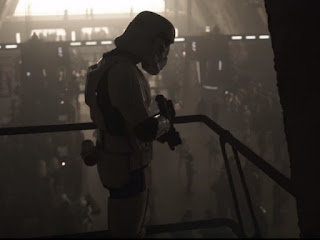 The situation on Corellia at the start of Solo: A Star Wars Story is entirely different. In the new installment of Star Wars, the border at Corellia is shown as very strictly controlled, with a physical wall between off-world and the planet’s interior. This wall is penetrated by tiny gates, which are secure structures of close-woven metal bars.


The space port building is patrolled by wandering teams of troopers in armor and overseen by functionaries in uniform. These troopers don’t hesitate to beat the living daylights out of any suspects they identify, and their powers seem absolute. A freighter captain landing on Corellia in the new movie would have to jump through several hoops, such as presenting papers, getting scanned and searched, and finally being allowed through a very literal wall before he could finally stagger to the nearest bar for a well-deserved drink after a long space journey, packed with swashbuckling adventure.

As I thought about the difference of tone between the two space ports, I was reminded of [something Margaret Atwood said. She said: I am not a prophet. Science fiction is really about now.

She isn’t the first to have noticed this about science fiction. Many have pointed out this paradox before. For example, William Gibson said: The pure expression of the science fiction writer's art is to write about the present day through the veil of technology and speculation.

And this idea is very strongly supported by the differences between the two spaceport scenes. The movie that was shot now has a very different take on borders than the movie shot way back in the 1970s. Borders in the new movie are understood as walls, as places where the movement of citizens is controlled and limited. It is a very Trumpian idea of what a border is, an ugly, grim, and dystopian idea that I really don't feel quite fits with the swashbuckling space fantasy that Star Wars is, or at least should be. Star Wars should be set in a galaxy that has more in common with the adventurous high seas of pirates and smugglers than it does with our modern world of surveillance and control.

I should be a little cautious about stating this difference so boldly, I suppose, because ideas of surveillance and control aren't completely new to Star Wars. Even in the concept stage there were imperial surveillance droids that hovered among the population, spying on them and attempting to keep them in line. They were too difficult to include in the movie, and the only one seen was on the Death Star with Princess Lea. But this was a relatively superficial layer of technology, imposed on a much larger, more complex and more chaotic galaxy than the imperials could ever hope to control.

The technological controls used by the empire in Solo: A Star Wars Story are far from superficial. The empire has penetrated deep into every facet of life, including war that is presented as pointless and endless, like the USA's current entanglements in the Middle East, and there are Storm Troopers on every corner, like a militarized police force. We see extreme poverty preyed on by rich gangsters and it is hard to avoid thinking that this is a vision of the USA now, and it is hideous.

To end, just a reminder that the best way to support this blog is to buy one of my books. Simply go over to Amazon, or Kobo and get one.
Labels: sci-fi movie Worldbuilding