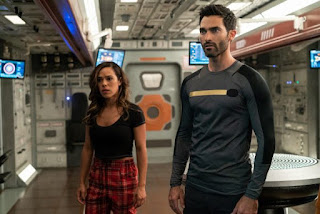 Another Life is the latest sci-fi television series from Netflix. I am going to be defending it to some extent but be under no illusions, this is not objectively good TV. It is enjoyable, if you are into spaceships, but good it is not. 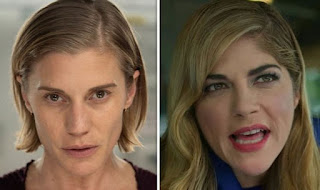 It premiered on July 25, 2019, and the show has a solid premise, about a space mission to investigate the origins of an alien artifact that mysteriously appears on Earth. The two big stars are Katee Sackhoff and Selma Blair. Katee Sackhoff plays Niko Breckinridge, the commander of the mission to explore the genesis of the alien artifact. Selma Blair has a more background role, as Harper Glass, a media influencer who becomes ever more deeply embroiled in government efforts to understand the artifact. 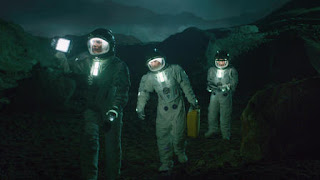 This all sounds great, and could form the basis of a great sci-fi show, but... It is instead a
dog’s dinner of memorable scenes from TV shows and movies that have gone before. They even try to get away with a reenactment of Alien's chestburster sequence. This is the sci-fi equivalent of redoing the baby carriage on the Odessa Steps scene from Sergei Eisenstein’s 1925 propaganda film, Battleship Potemkin. It takes a great director to pull off such an audacious move, as in when Brian De Palma built one of the finest sequences of his career around just this shot, in The Untouchables.

In fact, the baby carriage sequence has been referenced many times in cinema before De Palma appropriated it, including in two Hitchcock films, Foreign Correspondent (1940) and Psycho (1960). If the show had good writing and direction, it would be possible to do justice to something so iconic, but the show doesn’t have good writing or direction, and they do not do it justice. Both scripting and direction never rise above the level of B-movie cheese.


The storytelling in particular is so hamfistedly put together that it slaps you in the face with something insulting to your intelligence at least twice an episode. I’m talking about stupid stuff that makes you wince and groan. For example, the decisions made by members of the spaceship crew seem nonsensical and capricious to the point that it feels like they are bored school children. The actors all work very hard to sell the turd of a script they were given, and... it surprisingly often works.

Katee Sackhoff is a compelling actor with a talent for taking good material and elevating it, and she is not alone. Occasionally, Another Life will land a decent surprise, or provide an emotional moment that resonates. There are real moments of drama, and relationships emerge, before the writers sooner or later have the characters involved go off in another direction.

It’s not just the characterization that is off, it’s often basic logic. For example, Humanity’s first alien artifact is so poorly guarded that the head scientist, who is by coincidence the husband of the woman leading the space mission, can take his daughter for a stroll right up to it. Characters have to keep their space helmets closed at the start of a scene, but can open their visors later in the same location. A murderous mutineer is allowed to wander around unsupervised. Alien plants are tested to see if they are poisonous by characters biting chunks out of them, and on and on. It's like it was written in one rough stream of consciousness, and never revised. 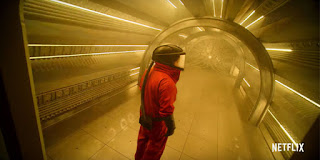 However bad the writing is, it never once feels padded. The show races from one adventure to the next. There are grisly deaths, malfunctions, alien plagues, love affairs, rivalries, and whole bunches of other stuff, all thrown at the screen to see what will stick. It is never dull, and you could almost forgive how bad it is, almost, but the cardinal sin for writers of sci-fi is that they get the science embarrassingly wrong. For example, when the Salvare goes soaring through space, past a floating astronaut, the series adds sound effects of a roaring engine, even though you wouldn’t hear it in the airless void of space. We could ignore that, I suppose, even Star Wars adds cool noises to the TIE Fighters, but what is unforgivable is not caring what a slingshot maneuver is.

A slingshot around a star is a good way to change your trajectory but the spaceship in this show takes three orbits around the star. That is not how slingshots work. Not at all. In fact it’s the opposite of a slingshot maneuver. Then there is the way dark matter and dark energy are presented in the show. The point of dark matter is that you can't see it, while here it is shown as clouds of inky smoke so thick it can hide a planet. That is so, so wrong. If the writers are making mistakes like this, they should not be writing sci-fi.

The show’s budget is also very obviously wanting. Some of the CGI scenes just cut off, as if they ran out of render time on a 50 second scene and had to use the 30 seconds they got before they timed out. The spaceship shuttle is as small as a minivan, and the spaceship only has a handful of bland corridors and locations within it. At every turn you see places where corners have had to be cut but... they have done wonders with the little money they had. The interstellar imagery is appropriately grandiose, and things like aliens and spacesuits look acceptable. The show has obviously had less spent on it than their stablemate Lost In Space, or perhaps they spent the same amount but on a much more ambitious range of equipment and effects. 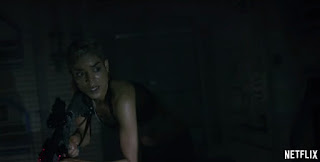 It’s not just in the SFX that things look obviously inexpensive. Location filming was done in Vancouver, which means that when the actors aren’t in a spaceship they are mostly under overcast skies while being chilled by a light drizzle. In some scenes they are having trouble stopping their teeth chattering. And there is no attempt made to differentiate the backgrounds for two off world settings, one Earth setting, and a dream sequence. They all happen under the same gray clouds, with the same forests and lakes in the background. Whether on Earth, or light years away, or within the mind of a malfunctioning AI, everything looks like rainy Canada. But I like that. I was brought up on British sci-fi of the 1970s with minuscule budgets, so alien worlds looking like damp woodland rings true for me. Where the visuals are much more up-to-date, but not in a good way, is that pretty much everyone on the spaceship is under 30 and the female crew all spend a lot of time in tight shorts, sports bras, and other form-fitting clothes. It’s eye candy, or fan service, or whatever you want to call it, and it feels exploitative. 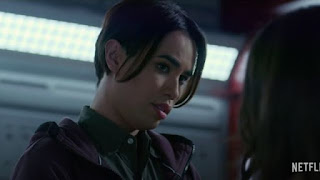 I just remembered that I said I was writing this post as a partial defense of Another Life – and I meant it. It’s too easy to point out all the stuff that the show does wrong, but they should also be given credit for the stuff they do right. For example, there’s a gender nonbinary character in JayR Tinaco’s Zayn Petrossian. This is groundbreaking, especially because it is not even commented on in the show. It's just normal for ship crews to be absolutely inclusive in the future. Also, the media are represented by a single influencer, and there is no mention of traditional TV networks, which we can assume have all gone the way of the dinosaur. There are a few thought-provoking moments like this mixed in with the nonsensical shenanigans that makes up most of the show. Another good point is the reveal of the aliens’ intentions, which is handled well and keeps you coming back to follow the main plot thread of the show. You really do want to find out what the aliens actually want.

The aliens really are alien. It is impossible to work out why they do the things they do. One moment they act one way, then they act completely differently. One moment their technology functions one way, the next moment it functions another way, they really are impossible to understand and alien in their thought processes and actions, although the same goes for the humans, so maybe that’s just more bad writing. I doubt this thing will get a second season, but I’ll watch it if it does.

To end, just a reminder that the best way to support this blog is to buy one of my books. Simply go over to Amazon, or Kobo and get one.
Labels: Movies review sci-fi TV space opera TV