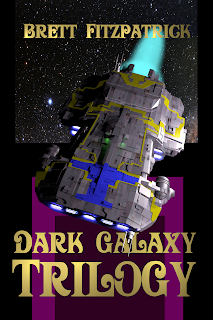 Yesterday, in my last post, I was talking about creating a book on demand. The book I’m creating is a big fat one that combines three of the sci-fi books I have written into one massive book. Specifically, it’s the omnibus of parts 1 – 3 of my Dark Galaxy series. 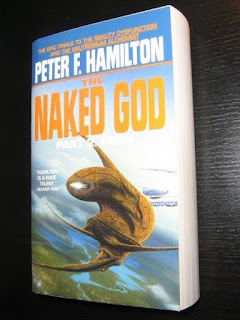 The book is so huge it rivals some of the books written by Peter F Hamilton, for pure heft. The difference is that Hamilton’s enormous books are just part of his space opera trilogy, not the entire thing bound into an omnibus, like mine. The Naked God, for example, comes in at 1,174 pages, but it is just the last book in his huge and ambitious Night's Dawn trilogy. The whole thing is well over a million words in length.

Anyway, I uploaded my, much smaller trilogy, yesterday, but it was rejected and Amazon asked me to make a couple of changes.

So I had to upload the cover and the manuscript again, this time calling it a trilogy rather than a box set. I took the opportunity to work on the cover, and give it the same font as my other books. I also worked on the spaceship a little. All I did was add a dab of blue to the nose of the spaceship, and I mostly did it for fun, just because I haven’t messed around in Blender for a wile. I do like tugging at those vertexes.

I also increased the size of the spaceship, while keeping the purple box at the bottom of the cover, though I made it a little darker and more complex to make the text really pop. That doesn’t sound like much, but it took me a ridiculous amount of time – like hours – because I enjoy tweaking settings in Blender to get things looking just the way I want them.

Once that was done I uploaded the file for the cover, made the edits on the interior file, and uploaded that too. It went super smoothly because I had ironed out all the strange issues with the file – including the appearance of unwanted drop caps and pages being half blank for no reason – last time. So the book is back in the approval line, waiting for somebody to take a look at it before it goes on sale.

The pop up window appeared at the end of the process telling me: Next we'll review your book to ensure it meet KDP's guidelines for book details, content, and quality. If it passes our review, it can take up to 72 hours to be available for purchase on Amazon. If it doesn't pass our review, we'll email you.

As soon as the book has made it through the review I will of course be posting again to send everyone to Amazon to pick up a copy. Thank you for reading – if indeed you still are.

If you can't wait

You can buy the individual sci-fi novels that make up the series called Dark Galaxy, which starts with Galaxy Dog: