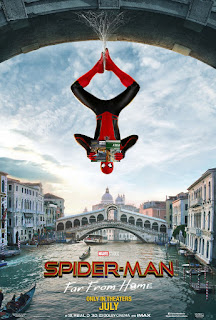 Before you start reading, be warned that this article is chock full of spoilers, so close the tab and move along if you have not yet seen it. Okay, with that out of the way, let’s take a look at one of the most successful Spider-Man movies yet made. Before we get into details, the big picture is that Spider-Man: Far From Home is a refreshing little palate cleanser, like a limoncello, after the bloated meal of Endgame, which was more like Beef Wellington.

It's a good movie but there was an extra hook for me because a lot of the scenes are set in my home town, Venice in Italy. In fact - just to take a moment for a quick plug - I and my coauthor have written a book set in Venice called Forever Young.

If you enjoy Gothic Horror, you may enjoy Forever Young:

Forever Young is a modern take on a classic Gothic novel, combining horror, death, and romance. It is firmly in the tradition of the most famous books of the genre but it is also something new. The book introduces us to Jasmine, a student of the occult, newly arrived in Venice, and to Violetta, who is trapped in an ancient and violent world with no escape. After the two meet, Jasmine gradually awakes in Violetta the desire to escape.


Far From Home is a smaller story about Peter Parker’s life after the ridiculous shenanigans of Endgame. It is great to see that Peter Parker is still living a double life as an ordinary teenager and a superhero, but somehow – despite the smaller scale – it feels like it has more at stake than Endgame, with its stupid galactic cull idea. It helps that Tom Holland skillfully delivers a performance that captures all of the anxieties and stresses of Peter Parker’s complex little life, and it is a story that taps into classic Spider-Man comics. It is easily one of the better Spider-Man movies in the character’s history.

There are some false notes, like Spider-Man having to be tricked into being a hero. It is funny, though when Fury covertly redirects Peter Parker's school trip's itinerary to Prague, where he is forced to fight a giant Fire Elemental. It isn't very Spider-man, because Spidey would never duck a battle like that, but it is humorous. 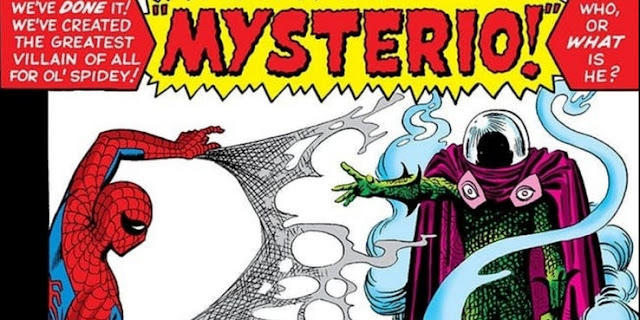 I also love the bad guys that are being chosen to appear in these Spider-Man movie. Once again, there was no Green Goblin or Doctor Octopus. Unlike Batman movies, which have the Joker in every single movie. Like in Homecoming, where we were given a great interpretation of the Vulture, this time we get the iconic villain, Mysterio, and he is so little known outside the comic book world that he can be introduced as a hero and the average crowd of viewers are shocked by the reveal that he is actually no good. Jake Gyllenhaal is great as Mysterio, pretending to be a powerful new ally of Fury’s in a battle against Elementals from another dimension. I did warn you that there would be spoilers.

At first Mysterio acts as a kind of surrogate mentor figure, the inspiration that Stark once was. It is just as this relationship is really deepening, and Peter Parker trusts him with the metaphorical launch codes to Stark Industries, that we find out he is really evil. These are in the form of Stark's glasses, which are equipped with an artificial intelligence that has access to all the databases of Stark Industries and commands a large orbital weapons supply. Having access to all this allows Mysterio to take his evildoing to a new level, and really hammers home his betrayal of Peter's trust. It’s a fascinating relationship, and it is balanced by Peter finally realizing that he is in love with MJ. As Mysterio's treachery undermines him, MJ's support strengthens him.

There are definitely sparks between Peter and Zendaya’s MJ. MJ deduces Parker is Spider-Man and from that moment on the movie becomes a blend of teen romance and superhero action. Zendaya has been selling what could have been a very minor role since the first movie, where she was such a magnetic force, even in the background.

Even though it is small scale, in comparison to End Game, Far From Home still has a lot of CGI action, and it is excellent. I have been a critic of Marvel CGI in the past, but it is great in this movie.  The giant monsters fell heavy and do real damage, and the action all unfolds in a way that really feels as if you’re watching a comic book come to life. Mysterio’s action is much more old-school than the relatively modern take on superhero action seen in Doctor Strange, but that fits very well with the mood of the movie.

Even the movie’s two post-credits stingers are really very satisfying, and are well worth sticking around for. The first end credits sequence is Mysterio releasing a video framing Spider-Man for the attacks in London and revealing his real identity is Peter Parker. It is a shocking twist, and cool in the moment, but it only takes a few moments to realize that it is probably a misstep for the story to go in a direction that everyone knows Peter Parker is Spider-Man.

In one quote, Marvel Studios president Kevin Feige says: One of the fun things about the ending of Far From Home is, whatever comes next, it will be unlike anything that has come before.

I guess that’s true but it is a difficult area to take Spider-Man in. It has happened in the comics before, for example in 2006 but it has never worked, and the comics always have to go to the most ridiculous lengths to reestablish a secret identity for Spider-Man and get the character working again. In 2006 the way the writers fixed it was that Aunt May was hit with a bullet meant for Parker and is left clinging to life in the hospital, forcing Spider-Man to – I kid you not – make a deal with the devil to save his favorite aunt. Parker also gives up his marriage to the love of his life, Mary Jane Watson, to have the world forget that he is Spider-Man. The idea that anyone thinks this might make a good movie is terrifying. 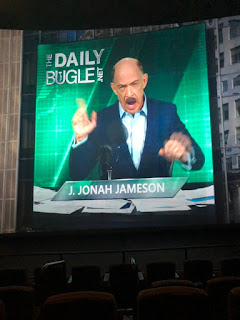 The only good part of this scene is that it is J. Jonah Jameson who breaks the news, and he bears more than a passing resemblance to a conservative shock jock, such as Alex Jones. I would be okay with a loud mouth journalist spouting fake news, and hate, and Parker having to deal with that. It is something that would be a reflection of our times.

The final tag of the film reveals that Nick Fury and Maria Hill weren’t actually Nick Fury and Maria Hill throughout the movie. They were Talos and Soren, the Skrulls audiences met in March’s Captain Marvel. The real Nick Fury, not unlike Peter Parker, was also taking a little vacation... in space. Nobody seems to know what this means, but maybe it will make sense when the next Marvel movie comes out, or maybe not, we'll see.

Obviously, after two great movies, Marvel will be making more Spider-Man. Apparently Marvel were pretty confident of the success of this new version of Spider-man, and they so they decided to follow the model of the Harry Potter film series, and have the plot of each film cover a new school year. The third film is planned to take place during Parker's senior year of high school, so they are going to have to get it in the can soon, or use their de-aging technology on Tom Hollander, who is looking more and more like a mini adult rather than a high school kid. I can't wait to see which minor Spider-Man villain gets showcased in Spider-Man 3.

To end, just a reminder that the best way to support this blog is to buy one of my books. Simply go over to Amazon, or Kobo and get one.
Labels: Comic Books Marvel Movies