Yesterday my writing partner and I decided to optimize the Twitter header on the Venetian Blood account. The first question for creating the image was what application I should use. If you have read this blog before, you can probably already guess which one I’m going to choose. Yes, that’s right – Blender.

Blender is a free and open source 3D creation suite. It supports the entirety of the 3D pipeline, which includes modeling, rigging, animation, simulation, rendering, compositing and motion tracking, even video editing and game creation. Any image you want to create can usually be put together in Blender, though like any 3D suite it has a real learning curve.

The image I and my co-writer had in mind was a trilogy of cell phone, paperback book, and Kindle, with a seasonal background. The huge advantage in Blender is that, with the elements set up, I can swap the images on the screens, book cover, and background, to change a summer message to a winter one, for example.

Forever Young is a modern take on a classic Gothic novel, combining horror, death, and romance. It is firmly in the tradition of the most famous books of the genre but it is also something new. The book introduces us to Jasmine, a student of anthropology, newly arrived in Venice, and to Violetta, who is trapped in an ancient and violent world with no escape. After the two meet, Jasmine gradually awakes in Violetta the desire to escape the hell that is her world.


So, firing up Blender, I entered the appropriate dimensions, which if you have been paying attention you will remember are 1500 pixels wide by 500 pixels tall, and I was ready to go.

First I found a nice image of a beach, pasted it on a simple plane and added it as the background of the header. Then I went looking for a 3D model of a mobile phone. I found one but it had nine million vertexes. That's nuts. Why would a simple mobile phone model have so many vertexes. Even though it would take longer, I decided to knock one up myself rather than add such a complex model to my Blend file. I was pretty sure nine million verts would slow my computer down to a crawl. The phone I bodged together only had 21,270 vertexes, which is plenty for my purposes. 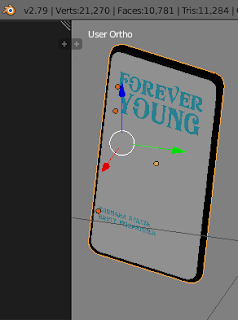 I then found a model of a Nook ebook reader on Turbosquid, and this one only had a few thousand vertexes, so I downloaded it. Next I went looking for an old-fashioned, old-school book-type book, the kind made out of paper, with pages and a card cover. I couldn't find one, because most 3D modellers who were offering their creations on the Internet seemed to be more interesting in creating gnarly old tomes of the type you might find in an RPG. So, once again, I quickly made a model myself.

I was quite pleased with the results, but the white Nook looked weird, so I decided to replace it with a Kindle. I couldn’t find a Kindle model that was free to download, so I had to make one myself. Except I didn't make a Kindle in the end, I just made an iPad, because it was easier. The iPad was easy to make because all I had to do was duplicate the model I had made of the cell phone, and change it a little. That's all an iPad is, after all, just a huge cell phone. First I scaled it up to about the size of the paperback, then I made the screen smaller and squarer, and added a couple of circles, and voila, the cell phone was now an iPad.

Then I hit the button to render, and created the upload file for Twitter. It was a lot of fun making this little promotional image for Twitter. And we all know that Twitter is essential to any project becoming a success, so they say. Next I have to do the same thing for Face Book. In the mean time, why not go to Amazon and get a copy of Forever Young.