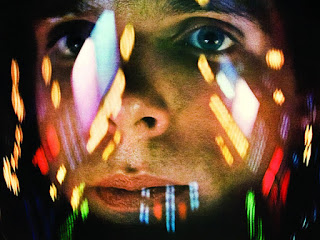 I've been listening to a podcast called Unspooled, hosted by Paul Scheer and Amy Nicholson. The concept of the podcast is that Scheer and Nicholson watch the AFI’s top 100 movies of all time in a random order. They take one movie per episode and dissect iconic scenes, talk to artists and industry experts, and discover just how these films got made.


I got into Unspooled thanks to another podcast featuring Amy Nicholson, The Canon, and I really enjoy her approach to movie criticism. I started with Unspooled when they took on one of the sci-fi movies from the list.

The sci-fi options on the AFI top 100 are Star Wars, 2001: A Space Odyssey, E.T. the Extra-Terrestrial, King Kong, A Clockwork Orange, Close Encounters of the Third Kind, and Blade Runner. I would listen the hell out of an episode based round any of these movies, but the one that was chosen for Paul & Amy to discuss on episode 7 is 2001: A Space Odyssey. Probably the best place to start. 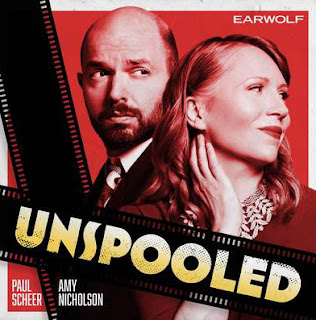 2001: A Space Odyssey is something very special and has left an indelible mark on the genre of science fiction. It is an epic science fiction film that was released in 1968. It was directed by Stanley Kubrick, who also wrote the screenplay in collaboration with Arthur C. Clarke. 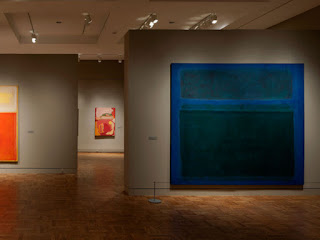 Amy starts right in with her interesting perspective on the movie. She compares 2001: A Space Odyssey to a Rothko painting. She talks about being presented in Rothko’s abstract paintings with a field of color and being forced to decide what to make of it. I liked this idea, and I’m a big fan of Rothko, an American abstract expressionist painter.

Rothko sought subjects that would complement his growing interest with form, space, and color. His art had the goal of relieving modern man's spiritual emptiness. To allow maximum interpretation by the viewer, he stopped naming and framing his paintings, referring to them only by numbers. Rothko described his new method as: unknown adventures in an unknown space, free from direct association with any particular, and the passion of organism.

Very large-scale designs were used in order to overwhelm the viewer, or, in Rothko's words, to make the viewer feel enveloped within the painting. This is a very good approximation of what Kubrick is also doing, except via a different art form, filmmaking. The film relies on imagery over exposition. Kubrick doesn’t want to explain what is going on through the dialogue of his characters - there are huge stretches of the movie where there is no dialogue at all - but he does want the audience to “get it”. 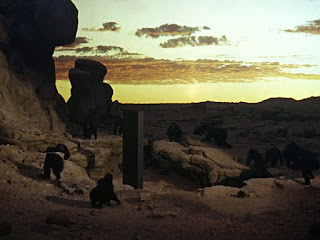 The film famously starts in a desert landscape, millions of years ago, where a tribe of hominids find a featureless black monolith. Influenced by the monolith, they discover how to use a bone as a weapon and this section ends with the famous shot of this bone being thrown upwards and transforming int a space station. Nicholson, who always does a ton of research and prep for her podcasts, mentions that this space station, in an early draft of the screenplay, housed nuclear weapons, and so this shows the evolution of one weapon into another. This makes a lot of sense, coming so soon after Doctor Strangelove, and shows how much Kubrick is focused on war and weapons as a defining characteristic of human evolution. The podcast also talks about how Kubrick thought of his movies not as a whole, but as a collection of sections. 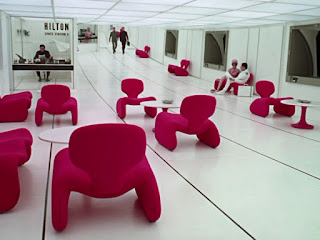 In the next section of the movie, millions of years later, Dr. Heywood Floyd travels to the crater Tycho on the Moon to investigate a monolith identical to the one encountered by the ape-men. When sunlight strikes the monolith for the first time in millions of years, a loud high-pitched radio signal is heard. There is a lot of talk on the podcast about the work that went into making Floyd’s flight to the Moon seem as routine and banal as possible. Kubrick predicted so much about the future in this section that it was used in a patent dispute over iPads between Apple and Samsung, apparently. 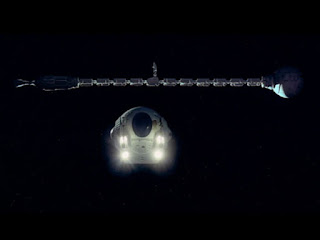 The next section of the movie starts eighteen months later, when the spacecraft Discovery One starts its journey to Jupiter. On board are Dr. David Bowman and Dr. Frank Poole, along with three other scientists in suspended animation. Most of Discovery's operations are controlled by the ship's computer, HAL 9000. The podcast talks about how much influence IBM had on this part of the movie, and how the letters HAL are each just one letter away from IBM. It’s a fascinating section of the discussion that I absolutely cannot do justice to here.

Hal states that he is foolproof and incapable of error but Mission Control advises the astronauts that results from their twin HAL 9000 indicate that Hal has a problem. Bowman and Poole enter an EVA pod to talk without HAL overhearing, and agree to disconnect HAL if he is proven wrong. HAL secretly follows their conversation by lip reading. The idea of a computer lip reading is very powerful, but it turns out that this was just one of he many elements that emerged through improvisation and discussion on set.

While Poole is on a space walk outside his EVA pod, HAL takes control of the pod, severs his oxygen hose and sets him adrift. Bowman takes another pod to rescue Poole while HAL turns off the life support functions of the crewmen in suspended animation. Bowman then goes to HAL’s processor core and gradually deactivates him. Amy is very sympathetic to HAL, and she thinks that he gives the performance with the broadest range of emotions. Arthur C. Clarke talked about this being the second of three jumps in evolution in the movie, a jump in computer evolution, except this one is aborted by Bowman. 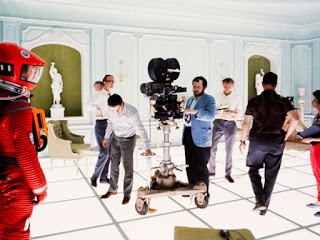 At Jupiter, Bowman investigates a monolith in orbit around the planet. He is pulled into a vortex of colors and imagery, which takes us into the last section of the movie. Bowman ends up in a bedroom, where he sees, and then becomes, older versions of himself, first standing in the bedroom, middle-aged and still in his spacesuit, then dressed in leisure attire and eating dinner, and finally as an old man lying in the bed. The beautiful moment where he spills a glass of wine is another idea that came from the actors and director on set. They were just improvising a more interesting way for Bowman to turn round and see the mirror.

I’ve listened to more episodes of Unspooled now, such as their discussion of Platoon, and they are all great, but of course a close examination of a sci-fi classic of the stature of 2001: A Space Odyssey is always going to be a stand out episode as far as this blogger is concerned.

To end, just a reminder that the best way to support this blog is to buy one of my books. Simply go over to Amazon, or Kobo and get one.
Labels: podcast sci-fi movie