My Sci-Fi Novels but Illustrated 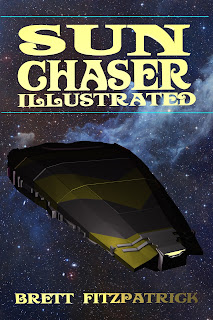 I am slowly creating and publishing illustrated versions of my sci-fi novels in the Dark Galaxy series. After all, a picture is worth a thousand words. Illustrated editions may be out of fashion now but there was a time when profusely illustrated books were commonplace. This was a period when authors such as Dickens and Lewis Carroll were paired with artists such as George Cruikshank and John Tenniel. The artwork not only enhances the aesthetic appeal of the book but adds a new layer of meaning to the story. Today it is rare to find novels with interior illustrations, but illustration survives more strongly in science fiction thanks to the genre’s roots in pulp publications. Then, during the 1960s and 1970s, quite a few respectable science fiction books continued to contain interior illustrations. A number of genre books published by Ace Books and others by DAW were illustrated.


We may never see the wide-spread return of illustrated books but it is a tradition that I am very keen to continue. It also allows me a “double dip” on distributors such as Amazon, because they will list a main editing and an illustrated edition as different books, allowing the story, potentially, to reach more customers. It also gives readers a way to support my work by buying the slightly more expensive illustrated editions of the stories. 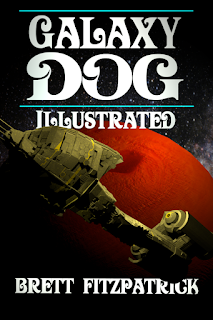 I try to give the illustrated versions of each book a different cover to the normal edition, to make it more recognizable and special. As you can see above, the covers of Galaxy Dog and Galaxy Dog Illustrated are very different. For the cover of the illustrated version of Sun Chaser, I am working on a spaceship that will be front and center in the composition, although I haven’t yet decided what is going to be going on around it. I think maybe it will be the target of a volley of missiles, with some nice 3D explosions taking chunks out of it. I guess I’ll have to watch a few tutorials on making explosions in Blender when I get to that point. Things are in the very early stages right now, with only the basic form of the spaceship starting to take shape.

In the mean time, why not get the illustrated version of Galaxy Dog, the first book in the Dark Galaxy series.

To end, just a reminder that the best way to support this blog is to buy one of my books. Simply go over to Amazon, or Kobo and get one.
Labels: Book Cover Dark Galaxy ebook covers Galaxy Dog military Sci-Fi