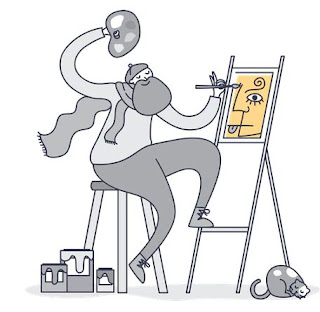 I recently started looking for work designing covers for self-published authors – without a lot of luck. Of the sites I have joined so far, Freelancer.com is the only one that has contacted me. They send me an automated email every day with some less-than-amazing work opportunities. For example, an organization that describes itself as a Health Care Company is looking for somebody to make them a logo. They stipulate that the freelancer must have experience in the relevant industry, and they must have good experience, and a recent portfolio. The skills they ask for are 3D Design, Graphic Design, Illustration, Logo Design, and Photoshop. In exchange they promise to pay the princely sum of between €9 and €27 EUR.

I am far from enthused by any of the sites I have joined so far, which are Upwork.com, Fiverr.com, Freelancer.com, PeoplePerHour.com, and Guru.com.

But, not to be put off, I am just going to keep going and join more sites. Today I went to truelancer.com first. First I uploaded the most boring and professional picture I have of myself.


After uploading my head shot, I added the blurb about myself that I have written, which goes like this: I create book covers, including the text and the image, using both 2D and 3D applications. I specialize in sci-fi, horror, and fantasy but I can turn my hand to pretty much any genre of writing. I always work to the best of my ability. I have designed numerous eBook covers already. My key strengths are in sci-fi, horror, and fantasy illustration, including creating and integrating 3D elements such as spaceships into my art.

I hit save but the screen jumped and I got a cryptic error message that said Number already exists in a red box. I’m guessing that they wanted my phone number, because most of the sites I have joined have wanted a phone number. Unfortunately, I couldn’t change the country code the form chose for me – I guess it automatically filled it in based on my computer’s location – so I couldn’t verify my number. So Truelancer.com is the first freelancing site I failed to even join.

I decided not to give up, so next I went over to 99Designs.com. They promise: You design. We’ll handle the rest. Do what you love, and get paid for it on 99designs. Find awesome clients and become a part of our global community of talented designers—all in a safe, secure workspace.

I hit the Join now button and it turned out that I was already a member. I had joined this site some time in the past and forgotten about it. The site tells me I have been a member since January 06, 2019. My profile is here.

As I looked around the site, I remembered why I was reticent to engage with it. The site is designed around competitions. For example, one competition has a deadline of 1 day, 17 hours to submit design concepts.

The client wants an illustration of a fictional character from an Urban Fantasy Novel about magicians in London. The character is described as 36, from London in 2017. He has short dark hair, stubble, dark eyes, and looks dangerous but not evil. He should be glaring or with a small, dangerous smile. In the illustration he should be wearing formal clothes and a top hat (because he is a stage magician). He holds a child’s wand with a pink sparkling glass stone at the gripping end. It’s a harsh contrast to his overall dangerous appearance.

I was tempted to submit something, but the time left before the deadline was just too short. I almost wish 99Designs sent me emails with likely jobs the way Freelancer.com does. Of the sites I’ve tried, 99designs is the most interesting so far, although the fact that it is based round competitions is a little intimidating. I’ll try and keep an eye on it, and see if something a little more sci-fi comes along for me to compete for.

To end, just a reminder that the best way to support this blog is to buy one of my books. Simply go over to Amazon, or Kobo and get one.
Labels: Book Cover Designer