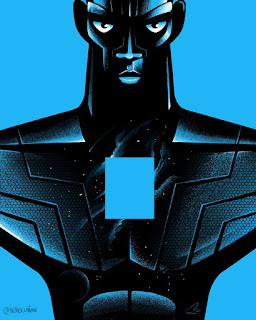 Zima Blue is part of Love, Death & Robots, an animated science fiction anthology series on Netflix. There are 18 episodes in the first season, each animated by different teams, but undoubtedly Zima Blue is the stand out work in this collection. It looks great and it has an old-school, big-ideas story that is sci-fi at its best. I loved it and in this post I'm going to be thinking deeply about both the visuals and story, and that means spoilers.

Please don't hesitate to seek out the animation and watch it before returning to this post to read what I have to say about it. It is only ten minutes long and never drags, so what have you got to lose? Also there is a very light twist to the ending which most likely works better if you keep yourself unspoiled before enjoying it.

Okay, with the spoiler warning out of the way, let's dive in. 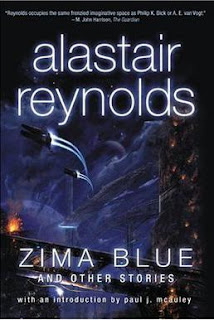 Zima Blue is about big existential questions, like a Golden Age sci-fi short story from a time when sci-fi was about wonder and ideas. In fact the story was written by a real sci-fi author, Alastair Reynolds rather than some random who knocks out scripts, like so much of the disappointing SF that comes out of Hollywood right now. Netflix in particular have been guilty of providing a platform for some egregiously stupid scripts, but this is something different, something better. 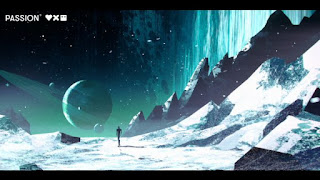 The story revolves around one man, Zima, who is introduced to us as a human painter. We then see him have extensive cybernetic modifications done in order to travel the universe and commune with nature, no matter how inhospitable the environment. We see him wading through lava on one planet and alone among ice cliffs on another.


Then - almost as soon as this is established -what we knew about Zima is revealed to be more complex, and this is where the twist at the end of the story is set up.

We are told that the biography we have just been given is wrong and, rather than evolving from human to cyborg, Zima was never human at all. He explains that he was originally a pool-cleaning robot, and that this small kernel of technology was so heavily modified over the years that it eventually gained sentience.

There is no way to tell which of these two versions of his life is true. One is told to us by a journalist, implying it could be erroneous, and the other is told directly to the same journalist when she visits Zima on his island. Whichever the case may be, when Zima comes apart at the end - I warned you there would be spoilers - it is the original pool-cleaning robot from the second version of his biography that emerges. 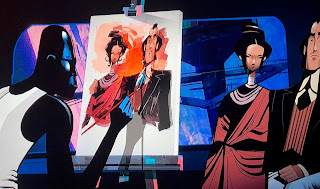 We cannot know the truth of his origin, but what we are told about his works of art is much less ambiguous. Like the artist himself, his art evolves from something simple, gradually growing more complex.

Zima starts out as a portrait painter who becomes dissatisfied with his subject. He moves on from portraits to painting images of space, trying to capture something bigger. Then he introduces his signature blue square to these images. The blue square slowly expands until he is painting pieces that are entirely blue squares. He continues to create works that are bigger and bigger until the only canvases he can find that are big enough are planets. We see him paint a planet's ring system blue, casting a giant blue reflection on the surface of the planet. 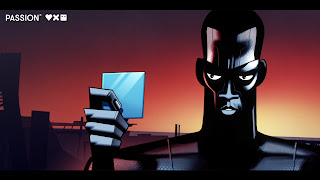 We are then shown that this special blue he has been chasing is a simple pool tile, given prominence in his understanding of the universe only because of its primal connection with his original pool-cleaning life. Of course, this reading only works if this is the version of his biography we choose to believe.

It is equally possible that he is a human who has evolved - via an intermediate stage as a cyborg - into a pool-cleaning robot, and this would mean that the color blue takes a more complex place in what is going on. Whichever is true, watching the animation feels like you are being helped to see something profound.

It could be something as simple as saying that true happiness is found not in searching for cosmic truths but instead in finding out what your own primal nature is. It might be even more simple. The story might only be saying that happiness comes through mindless work. That only a drone - like a pool-robot, following a simple algorithm that results in a clean pool - knows inner peace. 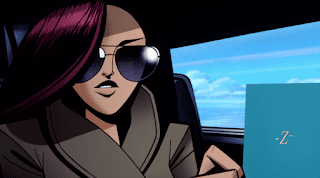 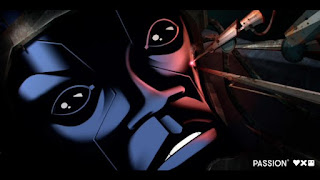 I like to think what is happening is that Zima really started as human and his intellectual investigations eventually resulted in him ending up as a pool-cleaning robot. That might sound like a horror story, like intellectual hubris taking an artist away from the human interaction of portrait painting on a journey that first isolates him in his attempt to understand the universe, and then rips him apart as he becomes fixated on one element of what he sees - the square of blue. He makes himself smaller and less intellectually powerful until he is a simple machine, and the square of blue has become a prison that confines him, and will confine him forever. But that's not how I see it. 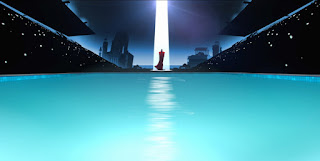 I like a more hopeful and uplifting reading of the story, where the pool robot represents us, where we evolve into a celebrated artist, and are able to tour the universe looking for answers looking for something bigger, better, and more powerful to explain us, and this search brings us back to ourselves, the simple pool robots we were all along. We are the architects of the life we have created around us, and it is up to us to find the beauty in it. We must all answer for ourselves the question: What is our Zima Blue?

This is a very classy animation and it certainly provides food for thought. Give it a try.