I am a big fan of Batwoman from the comic books so I have been waiting with baited breath for her TV show to start hitting our screens. It's a laptop screen in my case, but it's a big laptop with a nice screen so it still feels like TV. Anyway, however you watch, this feels like it has been a long time coming, but it is finally here now. Batwoman, on TV, wow. 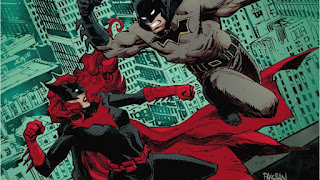 But, when you think about it, bringing Batwoman to TV is a no-brainer because there are so many advantages to this character for TV. To start with, Batwoman (like Batman) has no superpowers except training, wealth, and equipment, which makes her a little easier to transfer to TV than something a bit more powers heavy, like Green Lantern. It’s true she hasn't been around long, but she is already iconic. She has been going in comic books, in her modern version, since 2006, when she began operating in Gotham City in Batman's absence (following a crossover event called Infinite Crisis). She’s also complex enough to build interesting stories around. She is of Jewish descent, she's a lesbian, and she is also a cousin of Batman’s alter-ego Bruce Wayne, and thus a niece of his mother Martha Wayne, so she ties in tightly to all that great Batman mythology without being an integral part of it.


Batwoman also has a striking appearance, with pale white skin, several tattoos, and a clothing style defined as punk-psychobilly-goth in her civilian persona. Her superhero outfit is also instantly iconic, with vampiric red highlights in place of Batman's yellow, topped off with a cascade of red hair. 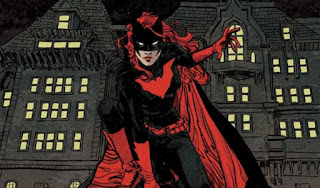 The show couldn't wish for better world building, so the only question in my mind as I started watching was whether they were going to stick with it and make it work for TV or whether they were going to mess it up. In the bad old days, superhero concepts used to be severely messed with before being transferred to TV but now characters are brought across much more faithfully. I have only seen one episode, so far, and it is therefore way, way too early to say for sure whether the show is going to be great, but I am already fairly certain they haven't simply messed up all the great elements that are already there in the comic book. The show has adopted them wholesale, and realizes them well.

Now comes the obligatory spoiler warning. Everything I have written to this point is well established so can hardly be considered a spoiler, but now I am going to talk about the new stuff from he TV show, so consider yourself warned.

Episode one starts with some flashbacks and exposition, but done lightly. I'm usually very much allergic to shows spoon feeding the background of characters, but this chunk of exposition was judged nicely. It was quite big, but still digestible. The way the big bad was set up was a very good example of show, don’t tell. We are first presented with one of the big bad’s minions, in a white jacket and white mask. He runs, and suddenly we have a white rabbit being chased by a young woman. This sets up Batwoman’s evil twin’s motif of Alice in Wonderland very nicely, without a word of exposition being required.

The woman chasing the white rabbit is Batwoman’s black, lesbian former girlfriend, and she immediately gets kidnapped, which was slightly worrying. Lots of shows have a bad habit of doing bad things to gay and ethnic characters, so I was instantly on edge, apprehensive that she might soon be fridged. But Batwoman is very visibly a diverse and modern show, right from the start, so I decided to trust the writers of the show enough to hope that they wouldn’t do anything too tropey to her. 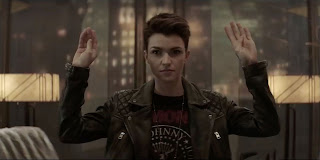 Batwoman then attempts two rescues of her former girlfriend, with no back up, no weapons, and wearing just a biker jacket and jeans, so it is no surprise that she gets her ass resoundingly kicked. The fight choreography of this battle quite nice. It’s well lit and the editing isn’t too choppy, so you can actually see what is going on, and what’s going on is an enthusiastic homage to John Wick and Kung Fu movies on a TV budget. For a superhero show it works very well. It is cartoony but also brutal, so brutal that Batwoman has to get stitched up in a kind of illegal clinic afterwards.

The second battle, where Batwoman is now in her suit, goes a lot better. Instead of trying to go toe-to-toe with the gang of thugs, she does that batman thing where she somehow uses wire to make some of the street toughs disappear into the ceiling, to give herself better odds. She then enters stage right and starts handing out ass whuppings. That evolution alone (from going in blindly to instead taking time and planning a little) makes me all kinds of happy. Batman and Batwoman do not have superpowers. They are fragile and vulnerable in a world of often physically superior evildoers, which is why they have to plan and scheme and think, and never let their iron determination waver for one second, even in the little things like beating up a handful of hoodlums. It looks to me like this show gets that. 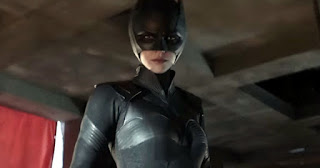 When Batwoman does make her entrance in the suite, it isn’t quite there yet and that’s also obviously intentional. The suit she puts on in the pilot does has not yet evolved into the iconic Batwoman look, with its striking splashes of red, but I am confident it will get there. There is so much publicity material already in circulation showing Batwoman with her iconic mane of red hair that it is only a matter of time before this look appears on the show. The sooner the better, for me. I was not a fan of Daredevil taking an entire series to get into costume, spending episode after episode in a mime’s leotard.

It is hard to know for sure, because pilot shows tend to be fast paced, but Batwoman also looks like it wants to avoid the Netflix hero shows curse of slow development. If the action and revelations keep coming at anything like the pace of the pilot, this will be an exciting watch indeed.

Another thing I think they have nailed is the atitude. Batwoman is an uncompromising badass with daddy issues, but that is shown to come from a place of pain. You get great lines, like when Batwoman is told: "The suit is literal perfection."
She replies, "It will be, when it fits a woman." But you also get raw vulnerability, like the tear that runs down her cheek in an angry encounter with her father. It’s broad strokes stuff, sure, but that's how I like my superheroes. I like them to believe in truth, justice, and the American way while being driven by a well defined set of demons. That’s the formula for the truly great heroes, it works, and they aren't messing with it here. I, for one, applaud that decision.

Considering the TV budget, this show also already looks great. The bat cave may be a smaller, more intimate space than we are used to seeing it depicted as, but that works well for the show. I also love that the computer looks like it was designed and built in the sixties. It's classy and it fits well. And there is a well developed world surrounding it. This world includes some odd stuff that instantly reminds you that all this is taking place in a universe slightly different to ours. There is a private police force called The Crows, for example, that you just know are going to cause a lot of problems in future episodes. These guys are not S.H.I.E.L.D, they are scary goons, and they are run by Batwoman’s dad, so there are all kinds of interesting directions that can go. 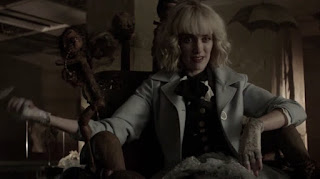 They are not the big bad, though. A character like Batwoman needs a charismatic psycho to go up against, in the mold of the eternal battle between Batman and The Joker. And right here in the pilot, Batwoman gets one. She’s called Alice and she is established very deftly with lots of Wonderland references, so that when she proudly reveals her name, it really lands. There is already more to say about this complex character, revealed at the end of the pilot, but I'll save that spoiler because I genuinely didn’t see it coming, and it works really well. In fact I didn’t realize it was the end of the episode. The forty minutes of this show, once you strip out the ad breaks, rocketed by in what felt like quarter of an hour, and I cannot wait for the next one to arrive.

To end, just a reminder that the best way to support this blog is to buy one of my books. Simply go over to Amazon, or Kobo and get one.
Labels: Batgirl DC Comics sci-fi TV